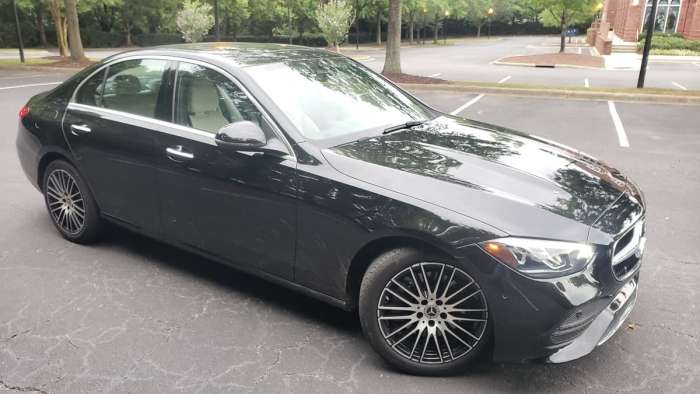 What characterizes the 2022 Mercedes C 300 Sedan is the high-tech cabin and the S-class inspired looks. Last week Torque News test-drove the 2022 C 300 sedan and we put our thoughts for our readers in this review.
Advertisement

Since last year, the new C-Class has been trying to find a place in a market. I say this because sedans are in decline in favor of SUVs. Therefore Mercedes had to do something to attract more buyers of the C-Class. And what Mercedes did is to draw inspiration for the C 300 sedan from the S-Class.

This sharing with its big sister is more than evident in the passenger compartment. While the exterior appears to be an evolution of the styling of the previous generation C, the cabin almost looks like a cut-and-paste of the S-Class. You basically see the same controls and the same steering wheel. In short, only the ventilation nozzles change. The C-Class is again a comfortable touring car, with noticeable advances in infotainment.

For many years, Japanese automakers dominated when it came to having the happiest customers. This was not because they indisputably built the best cars in the world, but simply because they met the expectations of their buyers better than others. Mercedes is one of the brands to which particularly high demands are made in this regard. Mercedes understands this and the C-Class has a special role to play here with its fifth edition.

With a length of 4.75 m, it is not only 6 cm longer than its predecessor. Instead of 1615, the C 300 4Matic now weighs 1730 kg. The latter may contribute to the C-Class approaching the E-Class when driving. In "Comfort" driving mode, every fiber conveys the impression of a heavy sedan.

The tuning in the "Sport" and "Sport plus" modes provides more feedback without ever tipping over into uncomfortable situations. So if you are not looking for maximum decoupling from the road, you can probably go for the sports suspension without hesitation.

In the previous generation of this class, Mercedes and BMW approached each other in terms of the chassis philosophy, with the new editions of the eternal opponents, the brand message is clearly visible again. A short test drive will make it clear whether you prefer the active nature of the 3 Series or the decoupling of the C-Class. The BMW is not uncomfortable, and the Mercedes is not a swing. Nevertheless, it is clear where the developers wanted to go in each case. Both have their justification and can be increased or reduced within certain limits via the configurations (BMW M package and Mercedes comfort suspension).

Describing the new 2022 C 300 is quite simple: the car looks like a mini S-Class, both inside and out. The whole is visible by the flowing lines of the model whose front and back parts dip downwards, which creates an impression of movement. 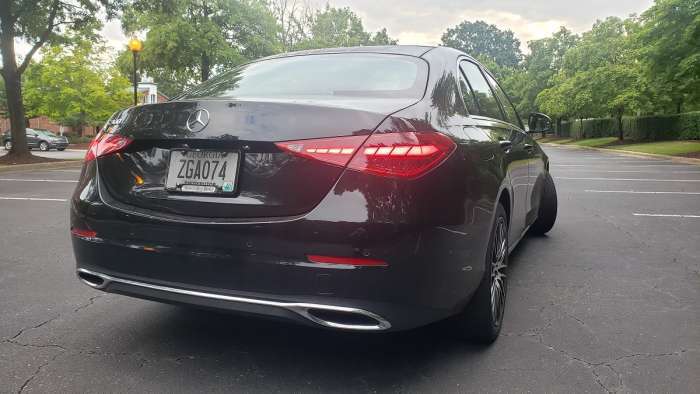 The passenger compartment is also moved back, one has the impression that the car has a more slender bonnet.

The front grille remains very imposing and incorporates in its center the large emblem of the brand, no one can mistake it. Optional 19-inch wheels add to the design; but, overall, the car is sober. We will have to wait for the AMG liveries to have a little more exuberance.

The interior of the 2022 C 300 is spectacular. As soon as you open the door, you quickly notice the inspiration of the S-Class, and the effect is surprisingly successful. The quality of the materials, the attention to detail and the quality of assembly are there. We are rarely disappointed at Mercedes-Benz. We have much less the impression of being inside an entry-level model, it is like being on board a more expensive Class.

For a long time, the C-Class drivers had to do without the MBUX infotainment system, but with the model change it is now also available here. It's a huge step: Voice control in particular works largely the way you've always wanted it to. Rarely do you have to repeat commands. The scope of what can be served in this way is enormous. Anyone who doesn't like to get used to it will quickly find that Mercedes has put a lot of thought into an intuitive interface. Despite a huge range of functions, you will quickly find your way around. The displays have a very high resolution, and the computing speed shows that Mercedes has not saved on hardware behind the scenes. 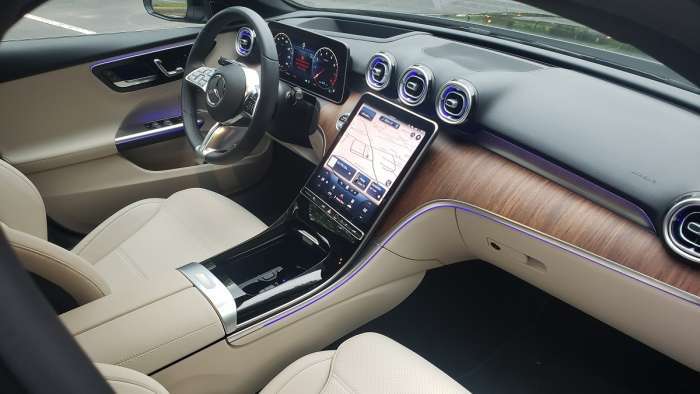 The huge screen in the middle sits lower than in the predecessor. Some people think this may distract the driver, but I didn't think so in this review. The decision to move the operation of the climate control to the display is ok too.

With a car in this price range and this standard, the driver can hope to be relieved noticeably with all kinds of assistants when driving. After all, the C-Class is at home on long-haul routes, where it shows its strengths. In fact, it is remarkable at what level the helpers are now working: The distance cruise control regulates even more finely and gently than in the predecessor. The parking aid cameras deliver a brilliant image.

The expensive matrix light is a blessing on country roads at night and an enormous gain in safety. It now resolves even more finely than in the predecessor, the necessary shadows are cut even more precisely. Traffic sign recognition, although not always error-free, is also among the best on the market.

The new interior is especially recognizable by the many technologies present. It's hard to get past the five massive circular air vents that are mounted high up on the dash, but it's mostly all the digital that catches the eye. The instrumentation is made up of a 12.9-inch screen arranged horizontally and which can be personalized.

In the center is the 11.9-inch screen of the infotainment system; it is mounted vertically, angled slightly towards the driver (6 degrees) and floats above the dashboard rather than being fully integrated into it. Simple to use, it allows you to display information from the second-generation MBUX system which, thanks to its "Hey Mercedes" voice assistant, allows you to control a little of everything on board and manage your trips quite simply, provided you have the discipline to learn the commands and, above all, to remember to use them. 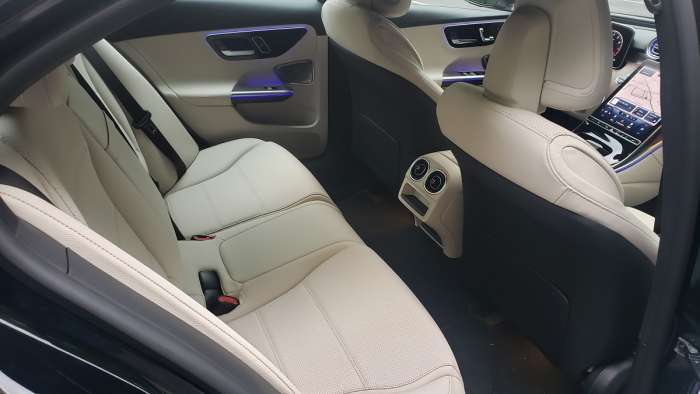 The front seats provide a good degree of comfort, although a little firm during long rides. Above all, the increased dimensions of the car make it possible to get a little more clearance for the rear passengers, in particular for the legs and shoulders.

Engine and Performance of the 2022 Mercedes C 300 Sedan

Various powertrains are expected later in the C-Class, including a C43 AMG later this fall, but the car initially arrives with a single engine under the hood, a 2.0-liter turbocharged 4-cylinder that develops 255 horsepower. horsepower and produces 295 lb-ft of torque. The engine benefits from new turbocharging technology developed in conjunction with the Mercedes-AMG Petronas F1 team, which reduces response time and maximizes the induction of fresh air.

The engine is mated to a 48-volt mild hybrid system that includes a starter-alternator. It adds 20 horsepower and, most importantly, 148 pound-feet of torque to the gasoline engine. In addition, it allows circulation in certain conditions without the contribution of the combustion engine.

Everything is paired with the only gearbox that is offered with this sedan, a more compact and lightweight 9-speed automatic transmission, optimized specifically for a hybrid application.

Overall, the car drives excellent. The turbocharged 4-cylinder engine deploys a good level of power, but it is its 295 lb-ft of torque that provides the desired effect, a good impression of power, as soon as you tickle the accelerator.

The steering wheel offers good grip, its fairly large sausage reinforces the impression of control. It includes a multitude of commands. The head-up display system is also complete, but it is very large and contains a lot of information. One needs to take the time to study it.

The new C-Class puts its rivals Audi A4 and BMW 3 Series in a tight spot: the engine responds outstandingly and offers the best technology with a perfect start-stop system. The optional steered rear axle steers the car precisely through corners, and the chassis is comfortable without being spongy or awkward.

Mercedes-Benz has been able to modernize its C-Class and make it competitive in the segment by focusing mainly on on-board technologies. It takes a step in electrification with light hybridization technology.