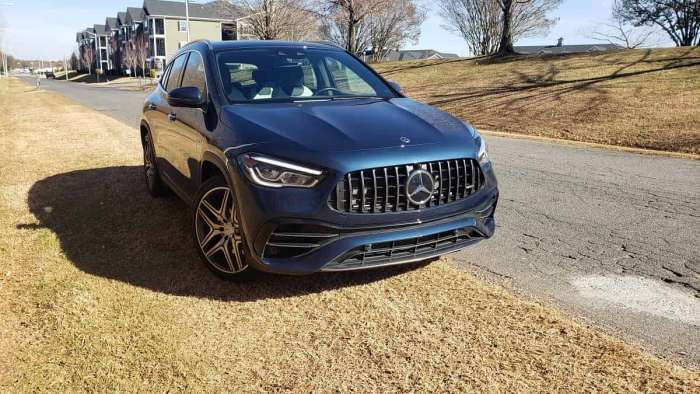 The 2021 Mercedes AMG GLA45 4MATIC+ is a sports car disguised as an SUV. This is why I want to tell you upfront not to be deceived by its typical SUV appearance that many people only use to take their children to school. I stress the school part because this sports SUV is not very smooth in city driving.
Advertisement

The 2021 Mercedes-AMG GLA 45 4MATIC + is the hottest variant of the smallest utility vehicle in the range. Freshly redesigned for the 2021 vintage, the GLA benefits from a slightly longer wheelbase, almost similar length, a wider body and a higher roofline. Despite these modest gains, Mercedes has even managed to increase the space in the passenger compartment enough to make it considerably more accommodating.

If you are unfamiliar with the 4MATIC+ and were wondering what the + is for, in 2016, Mercedes introduced a new 4WD system called 4Matic+. This system can send 100 percent of the available engine torque to either the front or rear axles.

Engine: That's Where The Action Is

The centerpiece of the 2021 Mercedes-AMG GLA 45 4MATIC + is rather under the hood. It rains in the market of the turbocharged 2.0-liter four-cylinder engines. Hand-built like the big V8 and V12 engines at AMG, we get here 382 horsepower and a staggering 354 lb-ft of torque. In fact, compared to its displacement, this little SUV is more muscular than the gleaming 4.0-liter twin-turbo V8, producing 720 horsepower, of the AMG GT Black Series (191.9 hp / L, compared to 180.8 hp). /THE). Very impressive. 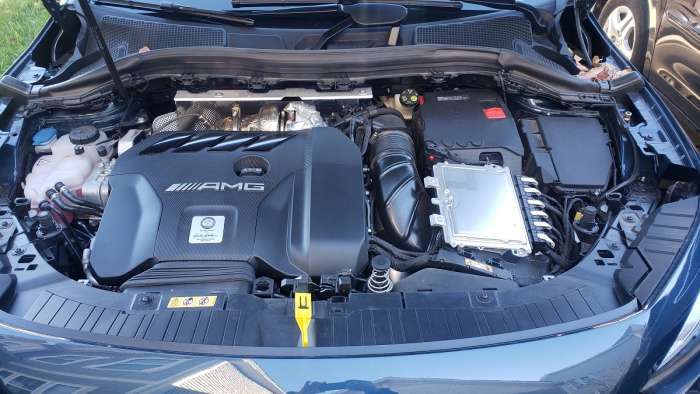 This is one of the most powerful 4-cylinder engines in the world, arriving in one of the most popular bodies today. After being presented in its "conventional" form, the Mercedes GLA receives the AMG treatment in its 45 variant , which means a great increase in power, as well as a more aggressive aesthetic that will help the performance of this sporty crossover.

Thanks to its gun starter system, its fast eight-speed automatic transmission and the grip of its all-wheel drive, you can accelerate from 0 to 60 mph in 4.4 seconds. Combined city/highway fuel consumption is 23 MPG with 20 city and 27 highway, which is slightly more than the GLA 35 and even more than the GLA 250.

Not only is the GLA45 fast, but when Sport mode is engaged, it displays a boiling, enraged character, with exhaust backfiring on upshifts and when you take your foot off the accelerator. With sport-tuned suspension, plus ground clearance of just 117 millimeters, the crossover holds the road confidently, of course.

The truth is that this GLA45 S 4Matic + offers sensations typical of a category sports car, but its character can vary thanks to the six different driving programs (we must add another three hardness options for the AMG Ride Control suspension) .

Such a level of performance and technology comes at a price, which, as you can imagine, is not within the reach of all pockets. So much so that the German house is asking for a minimum of 84,875 euros for each of these sporty creatures that serve well for your daily trips (be careful because it is not uncomfortable and its consumption does not rise if we circulate with head), while also you allows you to enjoy driving, alone or with the family.

The truth is that this GLA45 S 4Matic+ offers sensations typical of a category sports car, but its character can vary thanks to the six different driving programs. Such a level of performance and technology comes at a price, which, as you can imagine, is not within the reach of all pockets. The 2021 AMG GLA45 4MATIC+ starts at $54,500 and goes up to $59,960 with all the options included.

For everyday driving, the ride quality is adequate. Sport mode tightens the shock absorbers, and there, the GLA 45 stirs up its occupants a little more. There is a tangible difference between the driving modes, for those who do not want to go full speed every time they get behind the wheel.

The conventional brakes were modified by a high-performance scheme with 4-piston calipers on the front axle, but as an option you can opt for a pair of larger calipers and 6-piston calipers.

The Mercedes-Benz GLA is one of those vehicles that are located in a particular sector of the market, because they are not properly an SUV, nor a hatchback and perhaps what is closest to defining it is a crossover, without being completely convincing. However you look at it, you cannot ignore that it has its market and that it will not stop passing through the hands of AMG.

In terms of dimensions, it compares, within a few centimeters, to the Subaru Crosstrek, to take a known reference. Its closest rival is the Audi RS Q3, although it is somewhat larger. In BMW, the closest competitor is the X2 M35i, although it is clearly below in terms of power. 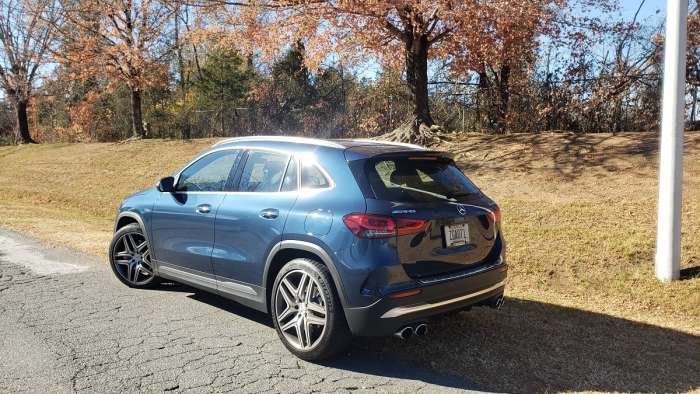 This AMG-style version stands out mainly for three things: its grille with vertical lines, its large rims (21 inches on the model tested) barely hiding the large front calipers and its four exhaust pipes at the rear. Certainly, various AMG logos remind us that we are dealing with an exceptional specimen, but we have to admit that it is not based on an excessively demonstrative visual.

The front of the 2020 Mercedes-AMG GLA 45 S 4MATIC + has a specific AMG grille with silver vertical louvers and the three sporty letters of the star brand on one of its sides. The fenders and wheel arches gain volume, as do air intakes with silver inserts. In this area there is also a splitter.

The side view is characterized by the presence of standard 20-inch wheels and, as an option, they reach 21. Through them there are red brake calipers.

The rear of the 2020 Mercedes-AMG GLA 45 S 4MATIC + features a double tailpipe with 90-millimeter diameter oval tails. There is also a widening rear apron, an air diffuser and a large spoiler.

The sporty atmosphere of the exterior of the 2020 Mercedes-AMG GLA 45 S 4MATIC + is transferred to the interior.

Inside, the black leather seats with colored stitching stand out, as well as a sporty-cut steering wheel. There are 4 different upholstery options and another steering wheel with a more elegant design and a system that records your lap times and metrics on a circuit. 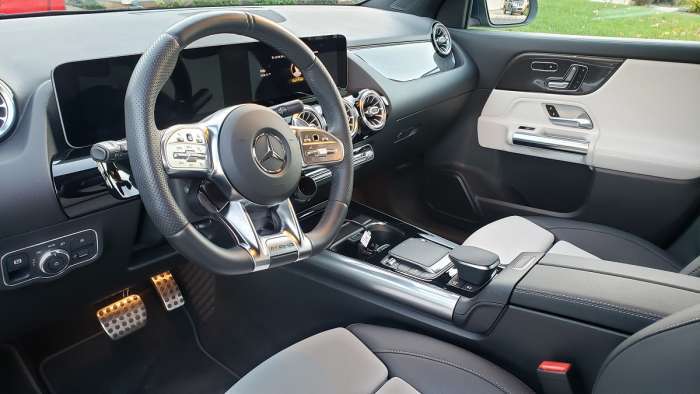 The AMG lettering is found at various points in the passenger compartment.

As is customary in recent Mercedes-Benz launches, the dashboard and the multimedia system display are two adjacent 10.25-inch displays. 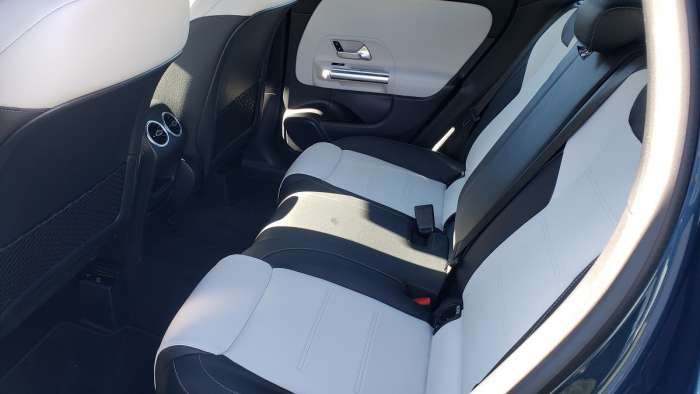 The trunk offers 435 liters of capacity.

The infotainment system offered by the 2020 Mercedes-AMG GLA 45 4MATIC + is the MBUX of the star brand. It allows a high degree of customization with specific elements that show raw performance data.

The position is high. That's one of the first thing you notice once you get in the car.

is higher than the compact one, so the visibility it offers is better but with nuances. Which? It depends on the chosen position of the seat. In our case it was the lowest possible, which causes the extra volume with respect to Class A to be more noticeable than it should be.

With a higher ground clearance than the CLA sedan, the GLA makes getting in and out very easy. Well seated in the supporting buckets, our gaze falls on a fairly massive dashboard which bathes us in a luxurious atmosphere. However, the assembly of the handles and door trim could be stronger and some plastics are of average quality. The other materials, however, generally appear solid. The large infotainment screen supports the perception of modern luxury by uniting seamlessly with a second screen showing essential driving data. The circular nozzles inspired by the jet engines of planes add a nice look to the whole with the inlaid diodes whose infinitely variable color embellishes the cabin. The general volume on board is very adequate. 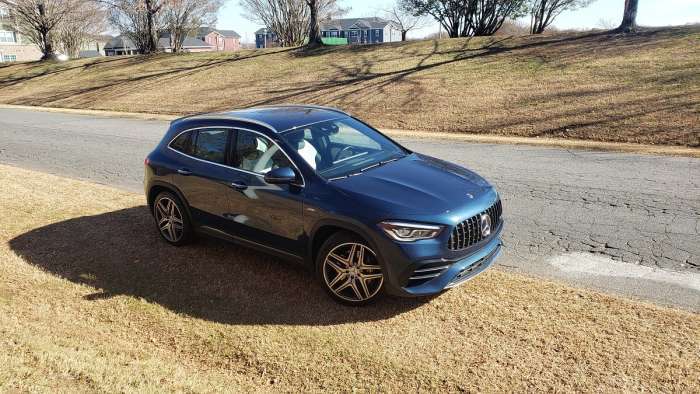 To tame this unusually high power for a subcompact SUV, AMG obviously focused on traction. Its all-wheel drive has a rear differential that distributes torque through two electronically actuated clutches. Mercedes specifies that this makes it possible to have a behavior similar to that of a rear-wheel drive platform, which is really noticeable under strong acceleration.

The 2021 AMG GLA45 4MATIC+ is a top athlete. Very successful on the dynamic level, it relies on remarkable mechanics to make the driving experience captivating. A crossover product of its time, this super small crossover seeks to establish a certain supremacy on paper with a spectacular technical demonstration.