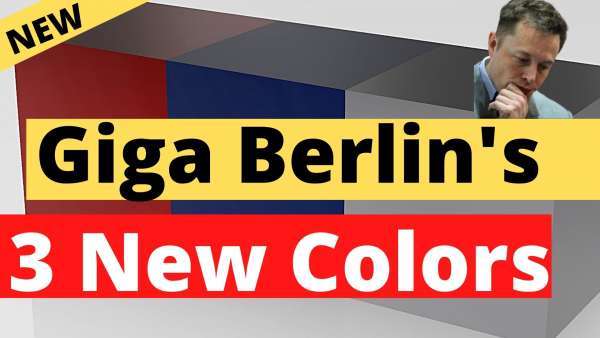 In case you missed it Tesla App Update 4.2.1 contains the three new colors, first available for Giga Berlin. Within the source code of the Tesla App’s recent update were also references to three new color options.

Here are those new colors from Giga Berlin.

Tesla_Adri on Twitter tried to recreate the colors, but he says he is not sure if he got them right.

I tried to recreate the colors, but I´m not sure if I got them right. https://t.co/9NVBm6lgYY pic.twitter.com/4rV5IfYuVM

However, don't be surprised that Tesla is already painting its Model Y electric vehicles at Giga Berlin's Paint shop. Our friend Jurgen, who tweets at GF4Tesla says the new provisional approval from the State Office for the Environment also allows the complete painting of 250 car bodies over a period of 60 days.

"Silver Metallic may be Giga Berlin’s default paint option," thinks Maria Merano from Teslarati.com. She reminds readers that earlier this month, Elon Musk said he would discuss bringing silver back as a default paint option after a Tesla owner noted there were too many white Model 3 and Model Y vehicles on the road.

I am very impressed with the agility and speed the Tesla mobile team is working.

Tesla Giga Berlin has not received full approval to start operations yet. Elon Musk estimated that Tesla could start Giga Berlin Model Y production by December, however, I don't know how many days it will take after Brandenburg makes a decision after this second round of public discussions, which are currently being repeated.

Tesla Giga Berlin's New Hurdle: It's Not Only the Gov't, but Now Tesla Itself
Teslas Are Sold Out Until 2023, But The Timing May Reverse
END_OF_DOCUMENT_TOKEN_TO_BE_REPLACED