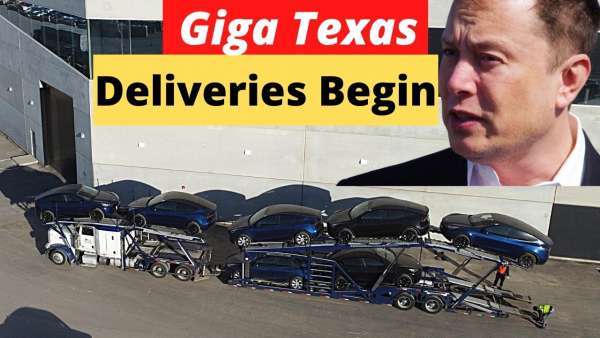 For the first time we see a truck load of Giga-Texas made Tesla Model Y electric vehicles leaving Gigafactory Austin. Where are they going? Are these Model Y EVs for sale? Is Giga Texas already selling cars?

"Model Ys on the move and on trucks departing Giga Texas today (23 March 2022)! Looks like we are finally seeing transport for the produced cars now. I wonder where they are headed," writes Joe Tegtmeyer sharing a drone video of Tesla Giga Texas latest updates.

As Tesla Owners Online Twitter blogger notes, It's important to remember that Tesla cannot sell cars made in this factory to anyone in Texas directly (factory pickup or otherwise). I believe they must ship them out of state first.

According to one opinion, Tesla is shipping these Model Y electric cars to its Tesla stores as demo cars.

According to another opinion, Tesla had stockpiled a little over a thousand 4680 structural battery packs and built these cars. "I don't think they would use these previous Model Ys as demo vehicles. I am pretty sure they are for customers," writes Twitter user Praveen Kalavai.

Do you think These Model Ys from Giga Texas are for Tesla customers and for sale?

Tesla Contemplates A New Strategy for China Retail even As Sales Boom
Jay Leno on Elon Musk & EVs: “I Think He Should Get ... Credit"
END_OF_DOCUMENT_TOKEN_TO_BE_REPLACED