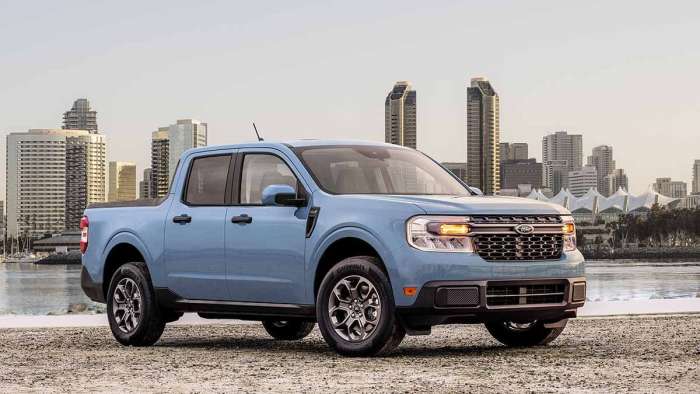 Hyundai Santa Cruz enters new segment as a contender to the Maverick. Santa Cruz betters Maverick in towing and performance but loses out on price and fuel economy. Ford claims more than 80,000 reservations for 2022 Maverick.
Advertisement

All of a sudden, the newest segment in the automotive industry is also the hottest one. Ford carved out a new segment in the industry when they launched the 2022 Ford Maverick, a compact pickup truck that slots below the Ranger in their stable of trucks.

Ford is an unquestioned reputable name and leader when it comes to pickup trucks, so it made sense that they jump into creating this new segment. And it seems to be working as Ford is claiming 80,000 reservations for the Maverick, which comes with a hybrid engine and a targeted fuel economy of 40 mpg.

Additionally, Ford says that a large portion of the 80,000 reservations come from California, where fuel economy and “green technology” are at the forefront. In the land of the Prius, the F-150 had been frowned upon. So Ford offers Californians and many others with an alternative pickup truck with enough capability to be viable and of interest.

Speaking of California, Hyundai has jumped into the segment too with a similar unibody truck named after a city in California. The 2022 Hyundai Santa Cruz is also a compact pickup truck, like the Maverick, although Hyundai declines to call the Santa Cruz a truck and rather names it the gimmicky Sport Activity Vehicle (SAV).

Is this SAV name on purpose so Hyundai doesn’t have to tangle with Ford, the king of the pickup trucks, in a burgeoning segment? Who’s to say, but you can’t deny that the Maverick and Santa Cruz are aligned as the first two competitors in this arena.

But who will come out on top?

Ford Maverick: Price Is Right
When it comes down to things, price is king. The single most important factor in buying is the price point, especially when it comes to the auto industry where prices can quickly get out of hand and cost you a lot. This is why Ford has aggressively priced the Maverick starting under $20,000. Sure the base Maverick will be bare boned and lack pizzazz, but even the midlevel XLT trim will stay in the upper 20s to 30s with the popular Lariat trim approaching $40,0000.

The Santa Cruz has a starting price of almost $24,000 with the top trim Limited exceeding $40,000. As for price, the edge goes to Ford and the Maverick, although adding towing packages and extra features could easily push the price upward. 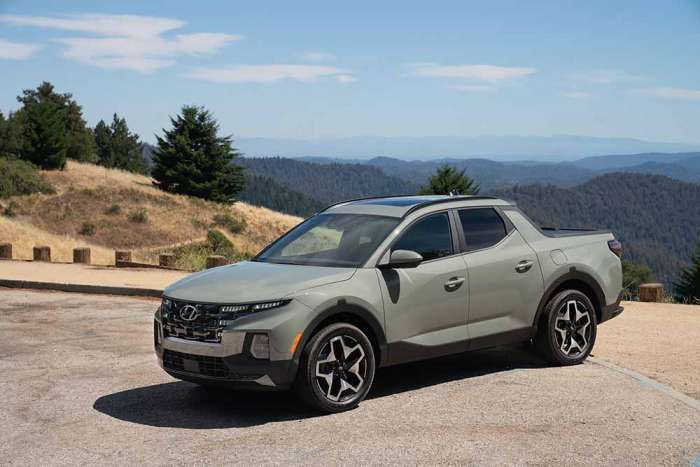 Maverick Has Edge At the Pump
Gas prices are skyrocketing. And in the big cities and the West Coast they’re even more expensive. That’s why big trucks like the F-150 are less popular. Ford is offering the Maverick with a 2.5-liter four-cylinder hybrid engine that is aiming for 40 mpg EPA rating. The Santa Cruz’s base engine is also a 2.5-liter four banger, but without the hybrid system, leaving it far behind the fuel efficiency of the Maverick with a 23 mpg combined fuel economy rating.

While the Santa Cruz’s 2.5-liter and alternative turbocharged 2.5-liter makes slightly more power than the Maverick’s two engines options, the fuel economy ratings for Ford tip the scale heavily in the Maverick’s favor.

It will be interesting to see how popular the base hybrid system is for the Maverick versus the optional 2.0-liter engine which will make 250 horsepower and 277 lb./ft. of torque. Ford expects this engine option to snag an EPA rating in the mid 20s, making it still more efficient than the Santa Cruz.

It will warrant watching whether fuel economy or size is the reason for the interest in these small pickup trucks. If it’s simply fuel economy, Ford will dominate. 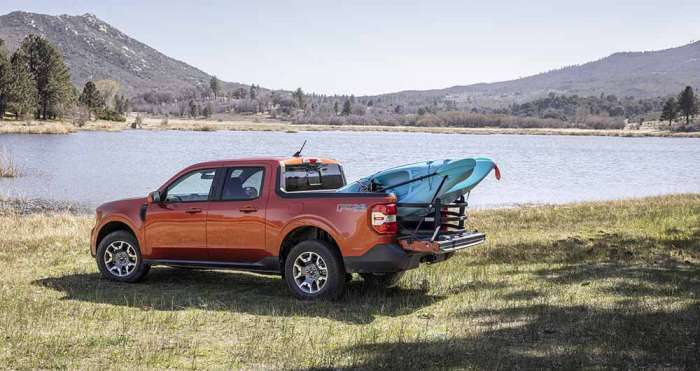 Dimensionally both trucks are almost identical, and both almost a foot shorter than a Toyota Tacoma, for perspective. However, the Santa Cruz wins the towing battle with a minimum towing ability of 3,500 pounds and can max out at 5,000 pounds. The Maverick base towing is only 2,000 pounds but can be upgraded (as in buying the towing package) to be able to tow up to 4,000 pounds.

Still, the Santa Cruz is the towing winner, but I’m a huge fan of the versatility of the Maverick’s bed, which can be extended by dropping the gate and angling it. Also, there’s already a healthy aftermarket system growing surrounding the Maverick that will make the smaller bed size less of an issue. 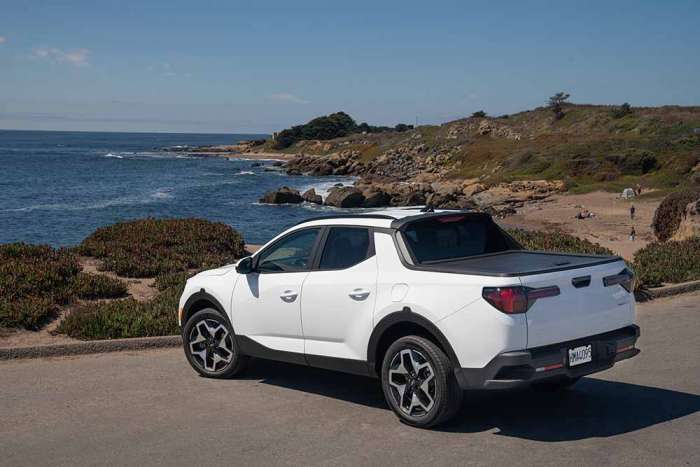 Ford Maverick or Hyundai Santa Cruz
Before sharing my final thoughts on which of these small trucks is better, it’s important to know that as of now I’ve not driven nor sat in either truck. So my judgment and thoughts are what I see on paper only and what research I’ve done.

However, I think Ford has a hit on their hands with the Maverick. It’s the right-sized, right-priced small truck that the city dwellers, young people and environmentally conscious folks didn’t know they wanted, but clearly have an interest in.

Having a direct competitor like Hyundai, can only help the segment. However, when it comes to pickup trucks, which automaker do you trust to get it right – Ford or Hyundai?

Related story: The Maverick and Santa Cruz are amongst the candidates for North American Truck of the Year.

What do you think about this segment? Do you have interest in these small trucks? Leave me your comments below.

Tesla Contemplates A New Strategy for China Retail even As Sales Boom
Jay Leno on Elon Musk & EVs: “I Think He Should Get ... Credit"
END_OF_DOCUMENT_TOKEN_TO_BE_REPLACED