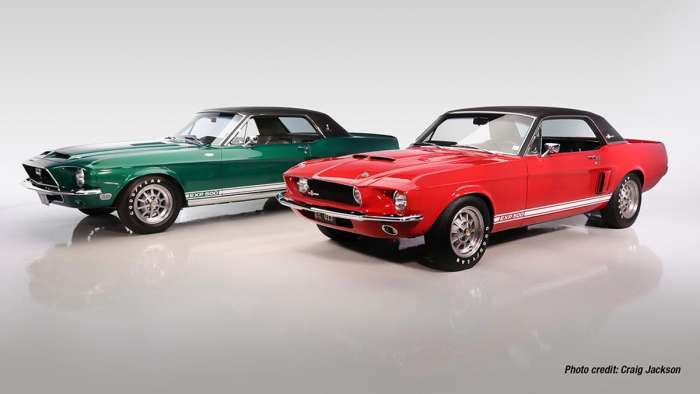 Craig Jackson, chairman and CEO of Barrett-Jackson, stole his own show when, for the first time, he unveiled two of his most significant restoration projects. Yesterday I wrote about the tale of the infamous ‘Little Red’ which is considered one of the greatest barn find restoration projects in Mustang history. I would say it’s the greatest.

This morning at the 49th Annual Barrett-Jackson Collector Car Auction in Scottsdale the newly restored “Little Red” as well as the restored “Green Hornet” Shelby GT Mustangs were revealed to the media and the public. To say that they are stunning and look as if they just rolled off the assembly line is an understatement. For this historic reveal, Jackson had other dignitaries in attendance. Among other guests, Jackson was joined by Steve Davis, president of Barrett-Jackson; Jim Owens, Ford Mustang Brand Manager; and Aaron Shelby, grandson of Carroll Shelby. Other representatives from Ford Motor Company, Shelby American and Shell Pennzoil were also in attendance.

Little Red is a prototype is a 1968 GT500 prototype. It is the only GT500 coupe (hardtop) built by Shelby American. Little Red is also the second GT500 to be serialized and completed. The big-block Shelby became the inspiration for the 1968 Mustang California Special.

Ford Motor Company produced a 1968 Mustang notchback coupe called the Green Hornet. It was manufactured at the Dearborn Assembly Plant in the fall of 1967 as a prototype to the 1968 California Special. The Green Hornet, along with Little Red were experimental Mustangs by Shelby American that became legends and inspired the highly collectible California Specials.

From 1967 through 1970, Green Hornet evolved as a prototype for Ford Motor Company and Shelby Automotive. In the first stage of its prototype form, the Lime Gold Mustang coupe started out as a template for the GT/Super Coupe program and wore the GT-SC script on the quarter panel side scoops, then morphed or transitioned into the GT/CS “California Special.”

Jason Billups, of Billups Classic Cars in Colcord, Oklahoma, restored the Green Hornet for owner Craig Jackson. That’s why it, along with “Little Red” were revealed together at this year’s Barrett-Jackson. The two cars stand side-by-side in Mustang lore and certainly a significant part of Shelby’s long history with Ford and Mustang.

2,600 horsepower worth of Mustangs
One of the most impressive displays during the “Little Red” and “Green Hornet” reveals was that two new 2020 Mustang GT500s were displayed next to it. As the proper descendants to these two classic cars it was something that gave many Mustang enthusiasts goose bumps just watching. 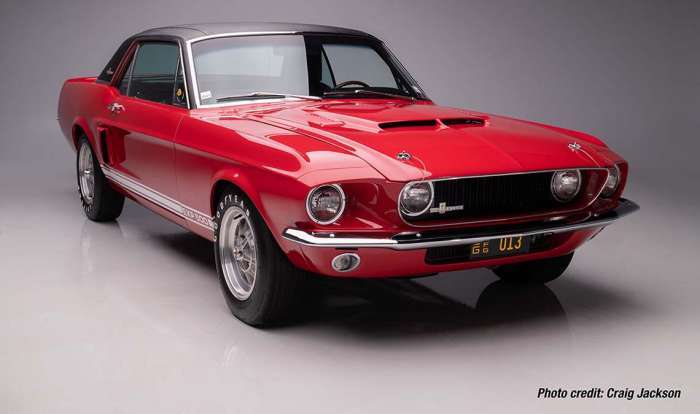 An independent rear suspension, four-wheel disc brakes and electronic fuel injection connect Green Hornet to the 2020 models, while the new supercharger is reminiscent of what’s under the hood of Little Red. The 2020 Green Hornet car was the first model (VIN 001) to roll off the line at Flat Rock Assembly Plant last fall.

Following the presentation, the four Shelby Mustangs were started in unison by Craig Jackson in Little Red, Steve Davis in Green Hornet, Jim Owens in the Rapid Red 2020 GT500 and Aaron Shelby in the Candy Apple Green 2020 GT500. The four vehicles represented over 2,600 horsepower.

Jimmy Dinsmore has been an automotive journalist for more than a decade and been a writer since the high school. His Driver’s Side column features new car reviews and runs in several newspapers throughout the country. In addition to being a nationally syndicated automotive columnist, Jimmy has been published in a compilation book about children growing up with disabilities, where he shared his own very personal experience. He is also co-author of the book “Mustang by Design” and “Ford Trucks: A Unique Look at the Technical History of America’s Most Popular Truck”. Also, Jimmy works in the social media marketing world for a Canadian automotive training aid manufacturing company. Follow Jimmy on Facebook, Twitter and LinkedIn. You can follow most of Jimmy's stories at Torque News Ford coverage. Check back again and search for Torque News Shelby Mustang for more Ford Mustang reporting from Torque News expert reporters.