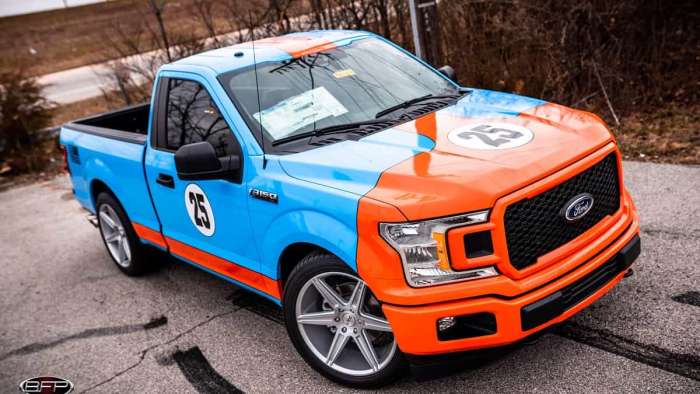 As seen in Ford vs. Ferrari the Gulf Livery color scheme is synonymous with racing and Ford Performance and now is showcased as a special Ford Heritage F-150.
Advertisement

Racing enthusiasts likely know about the legend of the Gulf Livery Racing. It was highlighted in the popular movie Ford vs. Ferrari which has grossed almost $100 million. This movie, starring Christian Bale as famous British professional race car driver Ken Miles and Matt Damon as a young Carroll Shelby, features the Ford GT decked out in powder blue and orange trim racing at LeMans.

Gulf Livery Racing Heritage Is Part of Motorsports History
The garish coloring was made famous by the Gulf Livery Racing and featured the colors of the Gulf Oil Company (powder blue with Marigold accents). These bold colors symbolize speed and racing heritage. It’s arguably the most recognizable paint scheme in motorsports history.

But beyond the legendary Ford GT40 where it got its fame, it’s also graced the exterior of the Porsche 917 as well. Ford featured the blue and marigold color scheme for a limited run Heritage Edition on the 2006 Ford GT. 2006 marked the 40th Anniversary of Ford’s four-year winning streak at LeMans. 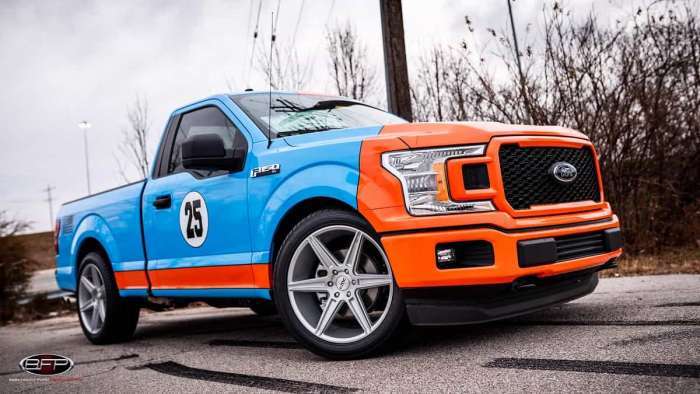 Die-hard enthusiasts might notice a couple of differences between the BFP Heritage F-150 and traditional Gulf Livery designs. “Our colors are little more bold than the originals,” Watson said. “Also we’ve put the number 25 on it to honor our 25th anniversary in business for Beechmont Ford.”

The BFP Heritage F-150 is a great truck to celebrate Ford history and to celebrate this dealership’s 25th year in business.

In addition to the Gulf Livery inspired wrap, the Performance-oriented F-150 has several unique aspects including KMC 22-inch wheels with upgraded AT tires. There’s a Roush performance exhaust that sounds absolutely nasty, as evidenced in this video. The truck is lowered as well with a Belltech Lowering Kit. The STX Sport inspired grille gives the truck an aggressive look.

“We are no stranger to vehicle customization. We have developed several promotions that have went viral, including our BFP Retro F-150, 775 HP Mustang for $42,995 and our 725 horsepower F-150 for $39,995,” Watson said. “We are a Ford dealership filled with people that genuinely love cars. That's what pushes us to create these enthusiast-focused builds.”

Be sure to check out my story on the aforementioned Retro F-150 by Beechmont Ford that shows how cool a 2020 Ford F-150 can look in a retro wrap.