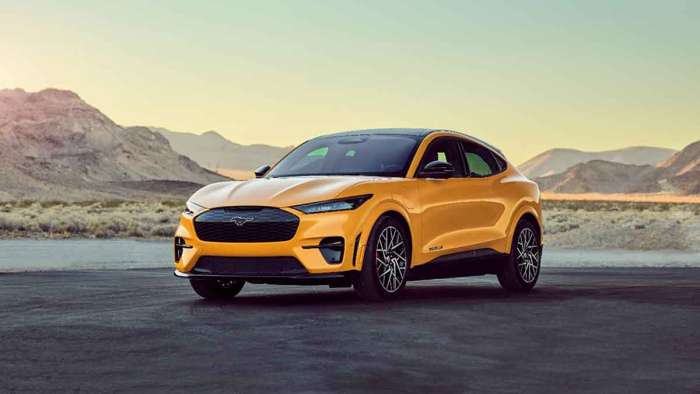 Performance Edition of 2021 Mustang Mach-E GT gets faster, boasts special looks and features. GT Performance Edition will be available add-on to anyone who has ordered the GT version. Ford claims 0-60 time of 3.5 seconds and range of 235 miles.
Advertisement

Look, we can all complain, gripe and post on social media about how the Mustang Mach-E is #notamustang. I’m as guilty of it as anyone. And while, other than a quick jaunt in it earlier this year, I haven’t driven the Mach-E yet, the more I’m seeing the more I see a lot of true Mustang characteristics being checked.

Watch this quick video of the Mach-E GT Performance Edition getting to 60 mph in 3.5 seconds.

Now Ford just announced making all three of those check marks even bigger and bolder by adding a Performance Edition to the Mustang Mach-E GT. Recently, Ford released their EPA estimates for the non-GT Mach-E and it hit a very special 300-mile plateau.

Some readers commented that 300 miles wasn’t that impressive, but they simply don’t understand the electric vehicle landscape if they dismiss the importance of 300 miles. More and more news continues to leak out regarding the Mach-E as we inch close to it being available to purchase.

And while we truly don’t know the pre-sale numbers, one rumor had them being high and one rumor has them very disappointing. Ford won’t tell us, so we will wait and see. But the more I learn about the Mustang Mach-E the more it’s winning me over.

Go ahead and let me have it in the comments below. I understand the Mach-E is polarizing. It’s hard, and wrong, to see the Mustang logo on a crossover. Crossovers represent everything a pony car isn’t. The Mustang is an icon, the Mach-E doesn’t warrant starting at iconic level. I get it, believe me.

As a Mustang historian and the guy who started the #NotAMustang petition, I hear you and am not trying to change anyone’s mind. It still doesn’t flow well when I even write Mustang Mach-E. To me it’s just the Mach-E.

Look beyond the name and you might see something that could be worthy of the fast, wild, and reckless running Mustang emblem. Let’s take a look at the Performance Edition of the Mustang Mach-E GT. 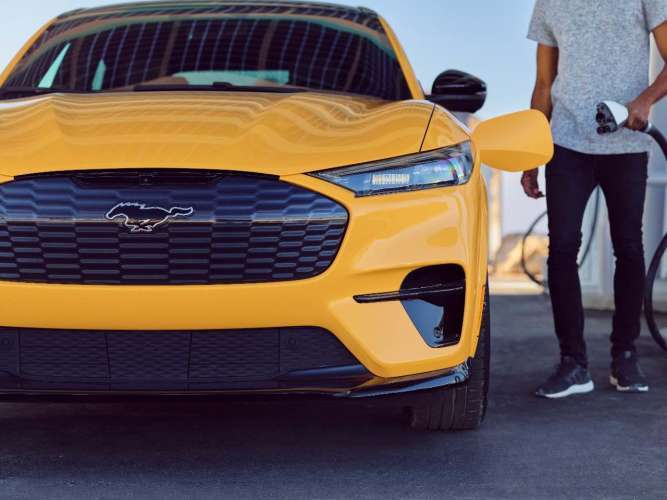 Ford says the Mach-E GT Performance Edition is targeting a 0-60 MPH time of 3.5 seconds and will create 480 horsepower (358 kilowatts) and a mind-blowing 634 lb.-ft. of torque (860 newton-meters). Mustang Mach-E GT Performance Edition delivers more torque, grip and better handling by drawing more power from its battery pack and targets an EPA-estimated range of 235 miles.

The 235-mile range is a decent drop down in range from the standard Mach-E (non GT), but there’s a price to pay for the extra oomph and all that torque. The Mustang Mach-E GT (without the Performance Edition) has an estimated range of 250 miles so there’s really only a 15 mile drop down for more performance.

The Mach-E GT (without Performance) has a 0-60 MPH tested time of 3.8 seconds, meaning it’s not that much slower than the Performance version. And the GT has a horsepower rating of 480 and torque numbers of 600 lb.-ft.

“We already pushed the envelope by creating an electric vehicle with the pony badge, so it’s only natural that we push it even further,” said Darren Palmer, global director, battery electric vehicles, Ford Motor Company. “Mustang Mach-E GT Performance Edition not only gives you the added performance you expect from the GT name, but accentuates the thrill with the responsiveness of an all-electric powertrain.” 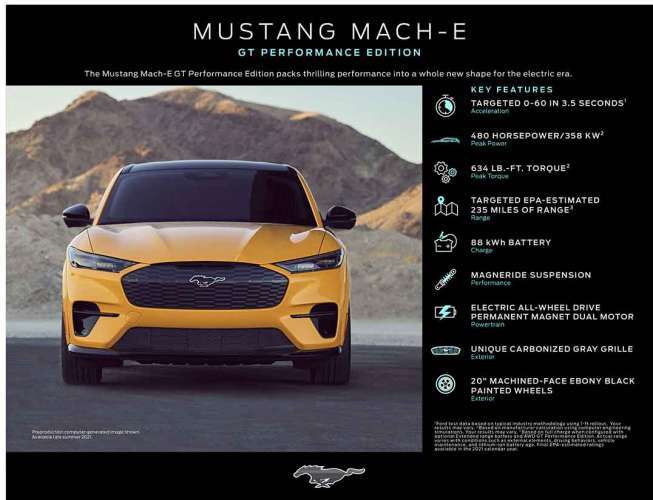 With the driver in mind, the front seats are Ford Performance-sculpted with Performance Gray ActiveX material featuring metallic stitching and unique Miko perforated reflective inserts. The instrument panel is enhanced by a unique aluminum appliqué, while the rear of the vehicle sports a Performance Edition GT badge. 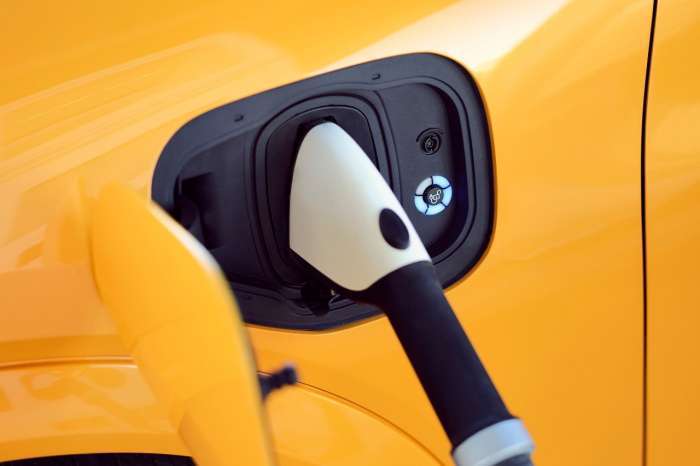 How much does the Mustang Mach-E GT cost?
The Mach-E GT has a starting price, according to Ford, of $60,500. Adding the Performance Edition to the GT comes at a higher price.

I asked Ford what that cost was and they would not comment further. I also reached out to a dealer to ask and my dealer contact did not know at this time how much extra the Performance Edition would add to the bottom line.

Customers who have already reserved the Mustang Mach-E GT will have the opportunity to add the Performance Edition package at time of ordering in spring 2021.

Mustang Mach-E GT and GT Performance Edition will be available late next summer.

Alright, this is where you get your chance to sound off. Every time I write about the Mustang Mach-E it brings the same comments. It’s not a Mustang. I hate electric cars. I like noisy V8s. As always, you’re entitled to your opinion and I want to hear them. Leave me your comment below.