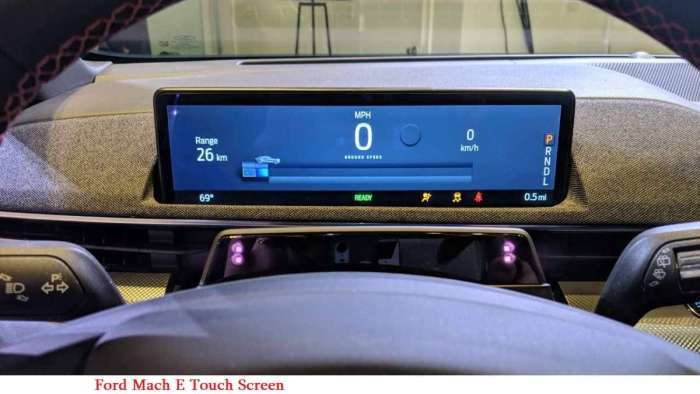 Ford refers to its as “Car 2.0,” as in, it is a complete rewrite of the way cars work in people’s lives.

Not least among the changes is to the interior, with an all-digital dashboard with a 15-inch center touch screen and single-panel digital instrument cluster. But it wasn’t all smooth sailing, and some of the mistakes Ford had to correct along the way could

Midway through the development of the all-electric Mustang Mach E SUV, Ford engineers had to go back to the drawing boards for a new center screen, a key component of any modern car, and especially an electric one that the company plans to compete with the upcoming Tesla Model Y SUV.

Why the last minute change? To switch the screen from horizontal to vertical—a technology that Tesla abandoned in 2018 with the Model 3. Automakers across the board (with one other notable exception) are switching from vertical or square screens to tablet-like horizontal screens. At first blush, the expensive late-stage substitution on the Mach E might look like a backward step, reverting to Tesla technology circa 2012, rather than adopt the latest interface.

Ford Explains The Switch in an Exclusive Interview with Torque News

In an exclusive interview with Torque News, Darren Palmer, the company’s Global Product Director for Battery Electric Vehicles, gave a compelling explanation for the switch, which also provides some larger insight into what’s important in today’s connected cars as well as tomorrow’s.

It helps to understand that the interior of the Mach E was designed by a separate team than the “Team Edison” responsible for developing Ford’s larger electric-car strategy that gave birth to the Mach E.
Known as “Menlo” inside the company, the Detroit-based team was given carte blanche and its full budget request to develop an all new infotainment and car-control system, Palmer says.

What they came up with is Sync Next Gen, a whole new infotainment system with machine learning that incorporates car controls as well as audio and navigation functions.

Although Team Menlo used all the latest Silicon Valley protocols—move fast and break things—to develop the system, integrating vehicle controls brought different demands than designing computers. The vehicle controls are key to the team’s demands for a vertical screen to replace the more tablet-like horizontal design.

To minimize distraction the team found they needed to leave certain controls, mainly for the climate system, such as temperature, defrost, recirculate, and seat heater operation always visible, so drivers don’t have to switch back and forth between radio or navigation controls every time they get cold, for example. (Having to switch functions frequently multiplies distraction when driving.) And for the climate controls to remain visible, they have to remain out of the way at the bottom of the screen to allow drivers to see more demanding functions higher up, including navigation maps and audio tracks. Palmer emphasizes that the Mach E followed human-centric design throughout its development.

It’s the same strategy that Tesla used in the Model S and Model X, then flipped sideways for the Model 3 to add all the car’s instrumentation, such as the speedometer, to the screen and bring it closer to the driver—the opposite of Ford's new approach. Ford’s 15.5-inch screen is also a little smaller than Tesla’s 17-inchers.

The screen uses Ford’s Sync Next Gen, which includes machine learning to ensure it always displays the functions the driver uses most frequently and in the sequence they most often use them. The only choices in the top menu are “The Car,” and “Me.” “The Car,” includes settings such as seat adjustments, drive modes (Whisper, Engage, and Stampede), how the power door locks work, and other vehicle settings. Everything else comes from the user’s phone, which the car recognizes when the driver steps in. That means the car can learn the preferences of any individual driver if it gets put into service in car sharing. The Sync Next Gen system also includes a large multi-function knob at the bottom that can be used for volume, tuning, temperature, or any of several other settings. Android Auto and Apple CarPlay come standard, but cannot operate wirelessly.

The other factor that enables the better design is a separate, horizontal instrument screen behind the steering wheel (in addition to an available head-up-display), to show drivers their speed, and other critical information. In all, it’s a more expensive, and more effective design than The single screen in the Tesla Model 3. Tesla turned the Model 3 screen sideways at least in part to move the speedometer closer to the driver, since the Model 3 has no other display. Using a single screen saved the company money on its most affordable car.

Going forward, however, automakers who want to bring back repeat customers in one piece will likely feature car-like vertical screens, rather than tablet-like horizontal ones.

Also see Torque News reporter Jimmy Dinsmore's "What’s in a name? If it’s the Mustang Mach E, there’s a lot in the name."

Eric Evarts has been bringing topical insight to readers on energy, the environment, technology, transportation, business, and consumer affairs for 25 years. He has spent most of that time in bustling newsrooms at The Christian Science Monitor and Consumer Reports, but his articles have appeared widely at outlets such as the journal Nature Outlook, Cars.com, US News & World Report, AAA, and TheWirecutter.com and Alternet. He can tell readers how to get the best deal and avoid buying a lemon, whether it’s a used car or a bad mortgage. Along the way, he has driven more than 1,500 new cars of all types, but the most interesting ones are those that promise to reduce national dependence on oil, and those that improve the environment. At least compared to some old jalopy they might replace. Please, follow Evarts on Twitter, Facebook and Linkedin. Find more of Eric's stories at Torque News Ford coverage. Check back again and search for Torque News Ford news for more Ford Mustang news coverage.

Tesla-Funded Research Reveals One of The Biggest Mysteries of EV Battery
Tesla Tesla Buyer Nets a Whopping $12,000 Discount After Asking for Reduction
END_OF_DOCUMENT_TOKEN_TO_BE_REPLACED