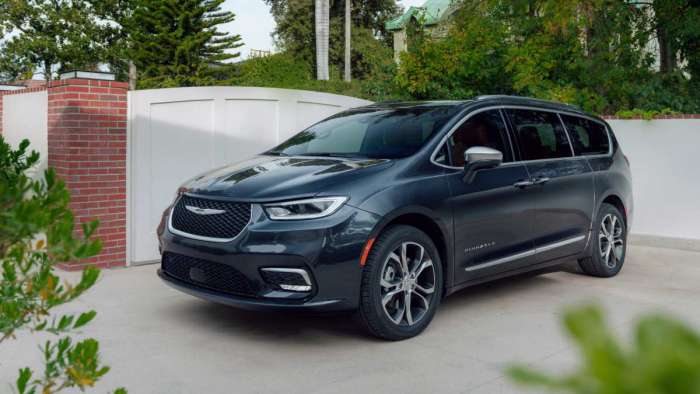 Fiat Chrysler resisted the temptation to control its own system and instead built on the best tools of others for the new UConnect 5 system in the 2021 Chrysler Pacifica minivan.
Advertisement

Even before the Covid-19 era, cars were changing from becoming mobility devices into mere mobile living rooms.

In a move to embrace the trend, Fiat Chrysler has introduced a new center infotainment screen on its new 2021 Chrysler Pacifica minivan. Its improvements show exactly what consumers are looking for as their cars become mere mobile electronics, and provide an example of why so many previous systems from many manufacturers proved so aggravating for buyers.

According to statistics provided by Fiat Chrysler, 51 percent of new-car buyers cite in-car technology as one of their deciding factors. Considering customers who have experienced different technologies, the number is even higher: 64 percent of repeat buyers say the in-car technology brought them back. 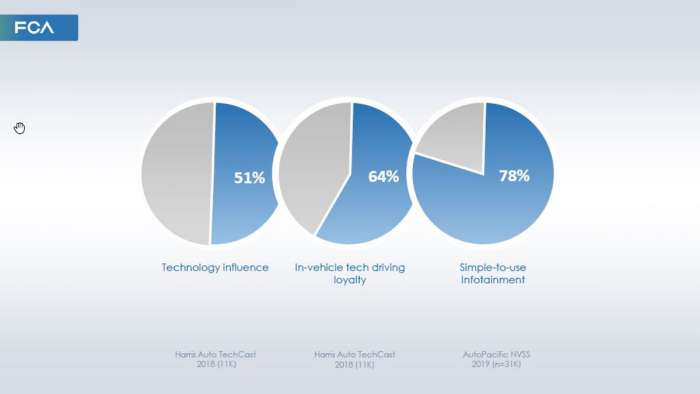 Critics and some automakers often assume that what car buyers want in in-car technology is lots of flashy features that make the car’s center screen resemble the kind of tablet computer they use in their living rooms, with games and hidden Easter Eggs.

What consumers actually tell automakers is their top priority is having a system that’s easy to use - not while sitting in their living rooms, but at 70 mph on the highway.

That’s why, in reviews of automakers’ native infotainment systems, Chryslers’ high-end UConnect system has always been among the top-rated: It’s simple to use.

The latest UConnect 5, debuting in the 2021 Pacifica minivan, doubles down on all the good points of previous UConnect systems, while adding capability and improving some bugs.

We got an early preview of the system, and here’s are some of the lessons, improvements and improvements we saw, as well as a few items still on the wishlist.

As TorqueNews writer John Goreham noted, UConnect 5 is up to five times faster than UConnect 4. That alone should make a huge difference in usability. Some of the biggest problems with many earlier infotainment systems is that they wouldn’t react for a second or two after the driver pressed a button. This left drivers looking back at the screen for long moments waiting to see if it did anything, and to pressing buttons a second—and sometimes third and fourth times, with more attendant long glares—to see if the command worked. All this proved a huge distraction on the road and led to many dangerous driving conditions. It also finally delivers wireless connectivity to Apple CarPlay and Android Auto. 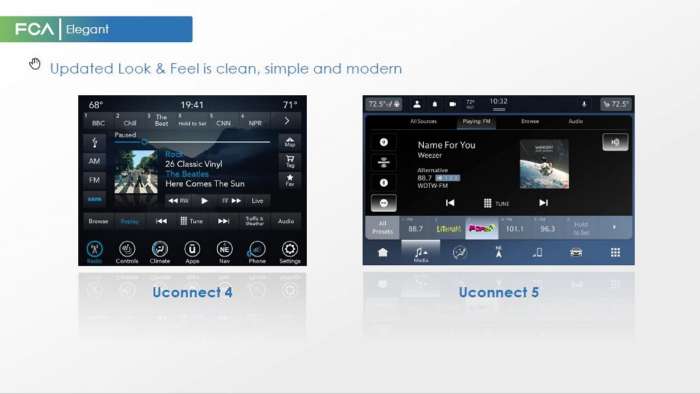 Another frequent source of frustration addressed in UConnect 5 is the size of fonts and buttons. As system designers work to add new features to their systems, it’s all too common to start jamming more and more buttons on the screen. This only compounds problems with drivers hitting things they don’t mean to or not hitting things they do. Instead, Fiat Chrysler’s chief designer for user experience and advanced design Vince Galante went to great lengths to make font sizes and “landing spaces” (buttons) Bigger, so drivers can spot them more quickly in short glances and improve their chances of hitting what they want even after they look away.

This can be a huge boon to highway safety, since a 2006 study by the Virginia Tech Transportation Institute showed that the likelihood of crashing increases dramatically when drivers take their eyes off the road for a mere two seconds.

UConnect 5 employs some familiar strategies to increase the number of features and reduce the number of buttons on a screen, by having multiple screens that drivers can swipe between to the left and right and up or down from the top or bottom. One is a “home” screen where drivers can put their own most-used functions. (And multiple drivers in a household can set their own.) Galante noted that drivers can swipe without looking at the screen or away from the road.

One of the biggest complaints Galante acknowledged the company has received about UConnect 4 was the need to switch to a different screen to turn the seat or steering wheel heaters on or off. The new system puts those functions on a drop-down overlay in the upper-left corner that doesn’t interrupt whatever is already showing on the screen. 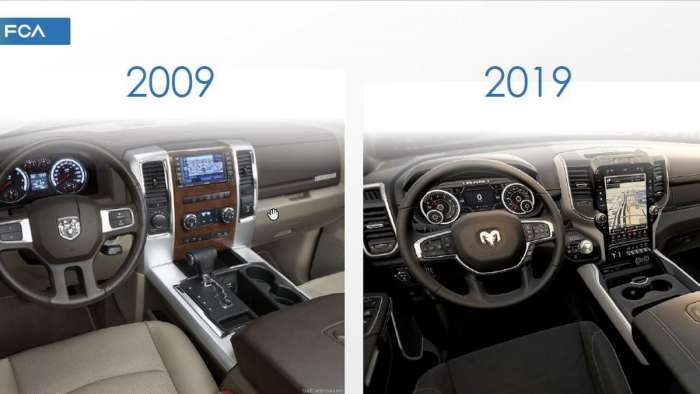 In a nod to functionality, UConnect 5 can also work on screens of various shapes and sizes, but Galante noted that the best screens for driving are vertical, because they allow drivers to stack and prioritize different information, giving, for example, a navigation map more prominent at the top. This echoes sentiments we’ve heard from other top user-interface designers, such as those who worked on the Mach E electric SUV at Ford. The vertical orientation can also give a farther view ahead in navigation directions, and leave a dedicated space at the bottom for buttons such as climate controls that drivers don’t need to look at as often, but need to know where they are. Many sedans and coupes, however, have dashboards too short to accommodate vertical screens. The 2021 Pacifica gets a new, larger 10.1-inch, horizontal center screen. 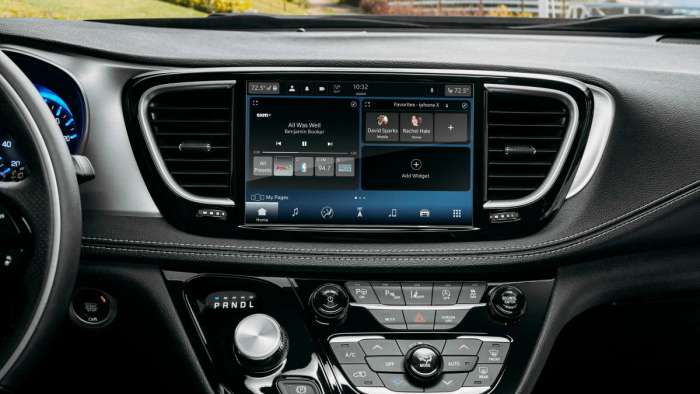 For the first time, the system allows the car to communicate with Smarthome features in your house, such as a smart thermostat or your garage door opener to automatically open the garage or turn up the heat when you get home.

Perhaps the biggest news is that UConnect 5 is now based on Android, giving owners potential access to the largest market for third-party apps in the world.

This flexibility marks a significant departure for Fiat Chrysler since most automakers have expressed a desire to maintain control of their own dashboard systems, even when they couldn’t keep up with those from big Silicon Valley software companies.

One thing we wish the system offered was the ability to let owners add more cameras that could be displayed on the center screen. Millions of drivers already rely on dashcams, although it’s arguable that drivers don’t need or shouldn’t have access to their video feeds while driving. It will be more important to provide for extra camera feeds when UConnect 5 migrates to the Ram pickup (which already offers a giant, 12-inch vertical touch screen). For pickup (and even SUV) drivers who use their vehicles to tow, trailer and RV-equipment makers are offering a variety of rear cameras to mount on the back of trailers. And those who tow gooseneck trailers (a kind of modified 5th-wheel design) often benefit from an additional camera mounted at the side of the pickup bed to help line up their trailers. So far these users have to rely on a separately-mounted screen or their cell-phones to see the views from those cameras.

As automakers like Fiat Chrysler open up their systems to allow more customization by drivers, perhaps some additional video imports can come next. We can always hope.