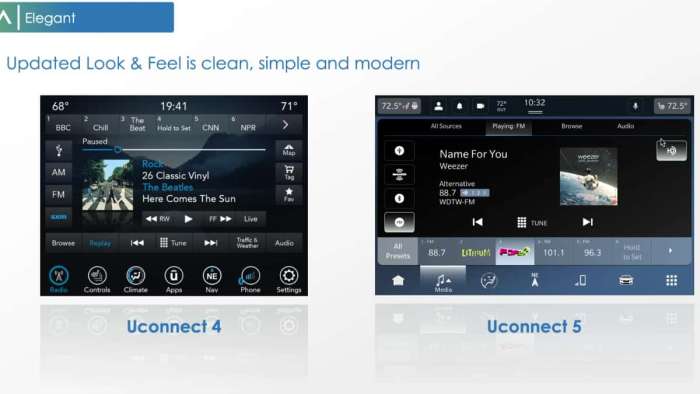 Three Reasons You'll Love The New Infotainment In Your Next Ram, Jeep, Dodge, Chrysler, or Fiat

We've had a sneak peek at the new FCA brands' Uconnect 5 infotainment system. Here are three reasons you will love them.
Advertisement

The Fiat Chrysler Automobiles America brands, Ram, Chrysler, Dodge, Jeep, Alfa Romeo, Maserati and Fiat, are getting new infotainment systems. We loved the outgoing system, called Uconnect 4. However, after seeing the new Uconnect 5 system, we think new car shoppers are going to be thrilled. Here are the most important new changes to this already excellent system we picked out after a virtual tour sponsored by FCA. 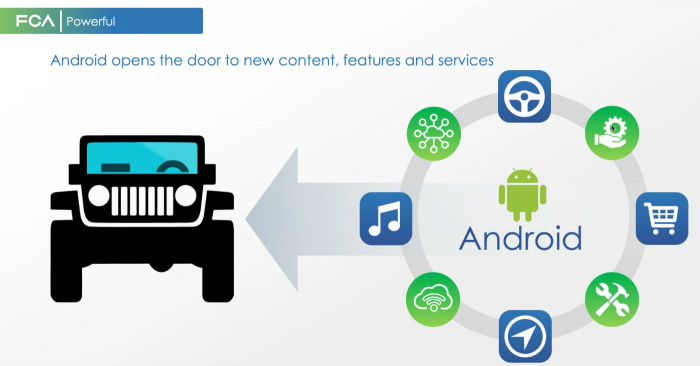 Faster Response - Richer Features - Better Screen Resolution
The new Uconnect system is powered by Android. Jin Palmer, Head of Infotainment & Feature Planning at FCA, says that this platform is among the most advanced in the world today. The upshot to you as a user/owner is that your system will have many more features, a richer screen resolution, and be faster in its response times. How much better is it? The resolution is 3X crisper. The speed of the responses is 5X faster.

Just one example of the user-friendliness of the new Uconnect 5 system is that it will allow you to create a simple homepage of useful shortcuts that you commonly use. Dragging and repositioning icons will work just like your phone. You will also be able to use two phones via Bluetooth at the same time and toggle back and forth between them quickly. No more fighting with your spouse over whose music you will listen to. You can switch back and forth seamlessly.

Vince Galante, Chief Designer - User Experience and Advanced Design at FCA , says that his goal was to allow a person to get to anything they want to do within two presses of the screen. That is assuming that person opts not to use the steering wheel controls, audible instructions, or Alexa.

Alexa On Board
The third thing to know about Uconnect 5 is that Alexa will be along for the ride. She can do things like open and close your garage door. Or you can say "Alexa start the car" if you are outside of the vehicle. Can you say, "Alexa stop the car" while driving? No. Alexa will not be in control of the operation of the vehicle. That is to ensure your passenger does not accidentally say "Alexa, crash the car." You know the benefits of Alexa. Now you can use it in the vehicle if you opt to.

Nick Cappa with FCA Communications told Torque News that the first Uconnect 5 system will appear in the new Chrysler Pacifica. What new aspects of the FCA Uconnect 5 system do you find of most interest? Tell us in the comments below.

John Goreham is a life-long car nut and recovering engineer. John's focus areas are technology, safety, and green vehicles. In the 1990s, he was part of a team that built a solar-electric vehicle from scratch. His was the role of battery thermal control designer. For 20 years he applied his engineering and sales talents in the high tech world and published numerous articles in technical journals such as Chemical Processing Magazine. In 2008 he retired from that career to chase his dream of being an auto writer. In addition to Torque News, John's work has appeared in print in dozens of American newspapers and he provides reviews to many vehicle shopping sites. You can follow John on Twitter, and view his credentials at Linkedin
Images courtesy of FCA media support.

Rick Schoen wrote on May 29, 2020 - 6:26am Permalink
My 2016 system quit in under 4 years. Just past warranty. I will definitely not be purchasing one of these failed systems ever again.
Ken Huffman Jr wrote on February 19, 2021 - 12:03pm Permalink
My favorite thing about the new system will be that it won't need two head units to run the 12" inch screen any longer. I'm hoping for a full size 12" Android Auto experience. Without this, I'll be severely disappointed.