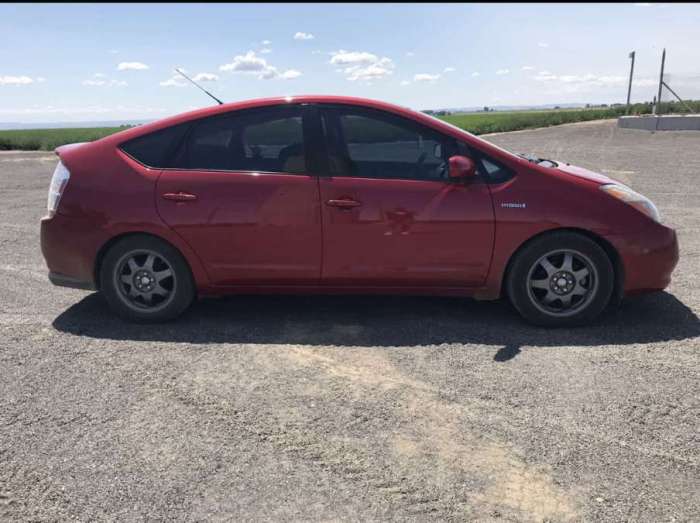 What The Inside Of A $600 Toyota Prius Looks Like

Ever wondered what the inside of a used 600 dollar Toyota Prius could look like? Check this one out.
Advertisement

If you are not aware of what I do on the side, I buy and sell hybrids, specifically the Toyota Prius. I recently picked up a silver 2005 that would not drive.

I am usually pretty willing to gamble 600 bucks on just about any hybrid. Since the Prius is well built, most of the time any issues the car has are really easy repairs. This 05' was no exception. Once I replaced the MAF (mass air flow) sensor, the car fired right up and drove great. The bad news was now it needed more than a quick rinse. 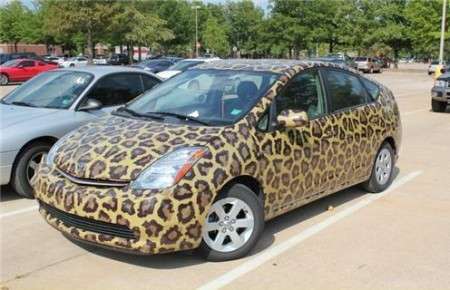 Here is what the inside of a 600 dollar Toyota Prius can look like and what to do about it.

The 600 dollar Toyota Prius Showdown
So, everyone is thinking about it so I will say it. This car honestly looked like an abandon homeless camp. Between the broken window that would not roll up and the insane amount of filth, I knew I had my work cut out for me.

The first part here is the driver's front area. This shows the floor which was packed with dirt, coffee that had spilled, and some other foreign material that was beyond recognition. The sad part was the floor mat was cleaner than the actual floor it was supposed to be protecting. 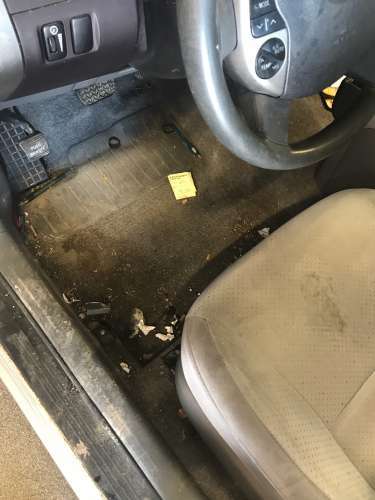 Next, here you can see the passenger compartment. This was after I partially cleaned it out. The spills on the floor were not as bad, but the seats were knarly. I ended up pulling the rear seat out and cleaning it on my workbench. I also pulled the only two good floor mats in the car out and cleaned them as well. They had done their job for sure taking care of the back carpet. 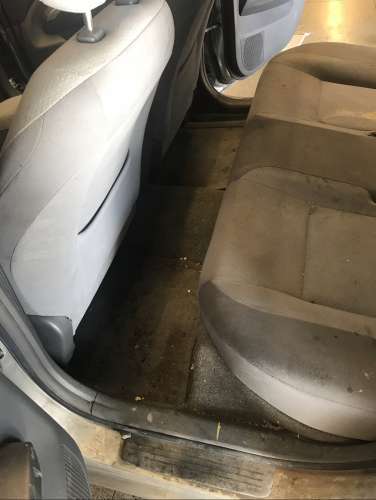 The trunk area was dismantled, and in the spare area, there was a large mouse nest. I was nervous to see what may have been under the high voltage battery. I did not need to take it out though. I also did not take pictures of this one and the one that I found under the wiper assembly. I think it would have grossed people out too much.

The Cleaning Results, So Far
This is where I am at after replacing the door and fixing about 100 little things that were broken. I had to recover the center armrest, which was about $30 and an afternoon at my friend's shop. I also replaced the cabin air filter and engine air filter both of which were terrible.

Here is the after shot of the driver's carpet and part of the seat. I had to use the carpet extractor, resolve carpet cleaner, degreaser, and quite a bit of elbow grease, but the results were pretty great.

I still have a long way to go, but at least there is hope now. By the way, anyone wants to buy a used now clean Toyota Prius, I have one for sale.

Have a great rest of your weekend and should the mood strike you, clean that Prius of yours so you do not end up like the owner that had this one.

Be sure to check out my other story, 4 things to check when buying a used Toyota Prius.