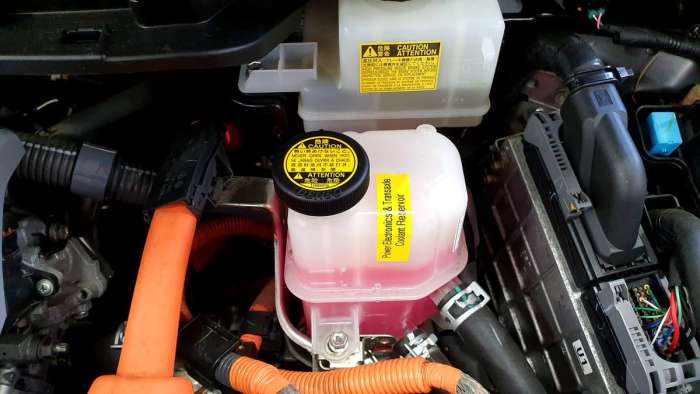 2 Best Options For Coolant On Your Toyota Prius

When it comes to maintenance on your Toyota Prius, there will be many people online giving out wrong information. I however have correct information that will not only help you choose the correct coolant for your car, but also save you a grip of cash. Here is why I know what the right coolant for your vehicle is.
Advertisement

It may come as a surprise that all engine coolants are not the same. Most people would waltz into a store thinking nothing of the sort and probably pick up a jug of their favorite green stuff and then proceed to fill their cooling system with it. Doing this 40 years ago would have perfectly fine. Today, however, it is not especially when it comes to hybrids and your gem of a car, the Toyota Prius.

I want to walk you through what coolant you are supposed to use for your Prius (any hybrid for that matter) and why you must pay attention to what goes in it. We will talk about the HOATS and the OATS and the Green stuff as well. Buckle up, your Prius just hit boost.

The Green Machine, The Coolant That Came Before

The traditional type of anti-freeze most commonly used in North America is known as "green" coolant mainly because of the color it is. It has silicate and phosphate additives that provides protection for aluminum and bare iron surfaces. These chemicals are also very toxic to the environment. Also, once the additives are depleted the coolant can be conductive and cause electrolysis that electrically eats away at aluminum and iron surfaces. This causes leaks and can lead to very costly repairs. This is another reason to do your homework on all your fluids for your vehicle.

Due to the nature of this coolant, most manufacturers (including Toyota) recommended a 30,000 mile service interval, which about 90% of consumers more than likely avoided. If it was not causing them problems, why change it. This mentality along with the need to make vehicles have longer service life, eventually led to one of the reasons car makers stopped using this coolant. This type of coolant has never been or never will be in Toyota Prius, we will get to that in a minute why.

Know that green coolant is proposed of ethylene glycol which aids in the freezing point of the substance and it was widely used for a very long time. Toyota (and others) stopped using this for several reasons. One, it was toxic and people used to just dump it in the ground. Two, it had a short service life so when people did not change it, problems with cooling systems happened a lot more. Mandates for cleaner cars we also starting to become a major player in the automotive industry. So during the 90's companies began testing on new coolants that would help them earn credits for cleaner cars.

This type of coolant cannot go into Toyota Prius. We have not explored why just yet, but for heavens sake, do not flush and fill with this.

In order to make coolant last longer, different formulations had to be created. With new emissions mandates from California and the United States government , car makers had to make vehicles that had less tail pipe emissions and got better fuel economy, hello Toyota Prius. With these changes also came new engine configurations and makeup. Car makers went away from using all cast iron engines and went to lighter aluminum engines. This was great for fuel economy but we still had another problem to solve. Green coolant in an all aluminum engine did not have the chemical properties that could properly maintain the aluminum.

This is where OAT came in. OAT stands for Organic Acid Technology. OAT anti-freeze contain ingredients such as 2-EHA, sebacate and other various organic acids. Unlike green anti-freeze, they generally do not contain silicates or phosphates. This helps them have a less environmental impact. Usually, OAT-based coolants will be dyed a different color.

Then came HOAT which stands for Hybrid Organic Acid Technology. This antifreeze uses organic acids but not 2-EHA and usually include silicates to provide protection for aluminum surfaces, very important for cars such as Prius. The differences are minor but play a big role in how the engine is protected.

Only One Coolant is Right For Toyota Prius

Loss of isolation is something no tech or hybrid owner wants to hear. Hybrid vehicles such as the Toyota Prius have two systems that integrate and work with each other. They are a standard gasoline engine and a high voltage system. The High Voltage or HV system requires complete isolation from the other systems. This means that everything about it is special and must be treated as such. The cooling system is no exception.

In order to maintain complete system integrity, the fluids that are used, in our case coolant, must have zero conductivity. Meaning that they cannot conduct electrical current, if this were so, we would see HV loss of isolation, or HV problems in the hybrid system on our Prius. Pretty crazy, but it is 100% true.

I have written other articles that talk about maintaining your Prius and somethings too look out for. In this article, you have to be very cautious about what coolant you use. There really only are two acceptable coolants that can go in your Prius.

This is what you can get from the dealer and it has been mixed with deionized water in order to keep it from having conductivity. It is also about $25-$30 dollars a gallon, and if you are doing maintenance on your Prius, like many DIYers, they tend to just find the cheapest stuff they can, and end up putting in the wrong coolant. Not good. So if you are unsure what to put in, just go to the dealer.

Option 2 Zerex, the other pink stuff.

This coolant when it was formulated by Valvoline, based the formulation off of the Toyota SLLC. This means that it is the exact formulation with the exact same stuff as you would get from your local dealer, only it is half the cost.

I recently was at a training where I learned about the deionization and found out that Zerex Asian coolants are the same formulation. Most people just do not know that.

Keep in mind there is a correct coolant for your Toyota Prius. For whatever reason if you wanted to choose a different color of coolant you could, as long as it meets the correct standards for the car. I would highly suggest that anyone looking for cheaper maintenance on the car or wanting to do a little DIY on their Prius highly consider using Zerex as a cheaper and effective alternative to the Toyota SLLC.

Naresh Doshi wrote on July 28, 2019 - 11:26am Permalink
Hello I own 2017 prius prime adv and it is close to 7thousand miles I notice when I charge the battery in summer it goes up 32 or 33 and in winter it goes to 22 to 25 at the most and when I drive and if I see upward hill then I out in charge mode and when I on plane road I put echo/hv and when I am on high way I put on standers so what is your recommendations to get out more miles out of that and please recommend the charging process also
Jesse wrote on August 5, 2019 - 4:21pm Permalink
Lets keep this simple. Look in your owner's manual and it will tell you the type of coolant and frequency to change it. My '09 Corolla takes Super Long Life Coolant (SLLC). I buy Toyota SLLC. Period.
Tom Smith wrote on October 1, 2021 - 8:05pm Permalink
That's 1 point of this article: How NOT to spend OEM Dealership price and go with the Zerex Asian Formula that is the same composition for 1/2 the cost of SLLC. I believe Super Tech (Walmart) has an asian formula coolant as well..
syed akber ali wrote on February 8, 2020 - 3:02am Permalink
prius 2011 modal coolant wtaer requaried hoe much price
DC wrote on January 8, 2021 - 1:10pm Permalink
I'm a little confused. New 2020 Prius L Eco, never had any service yet. I hit a curb on the front driver side a foot or so from the front of the car. A radiator support became bent and Both a Pink and a Green colored coolant (I'd assume) started leaking out of the car. Why is there green coolant in there? What is the second coolant for? Do you think its more serious than just needing to replace the radiator and fix the support and add more coolant? You mention Zerex brand coolant which I looked up but there are a lot of different formulations. Are you recommending the "Asian Vehicle" one that says Toyota and has a Red colored label?
Daniel K Johnson wrote on April 23, 2021 - 6:23pm Permalink
Are you sure the oth fluid was coolant? You likely hit the windshield washer fluid tank
clarece wrote on May 4, 2021 - 4:30am Permalink
hi own prius c 2012...what are the possibilities that may cause the break warning light..vsc and abs sometimes appeared...tq