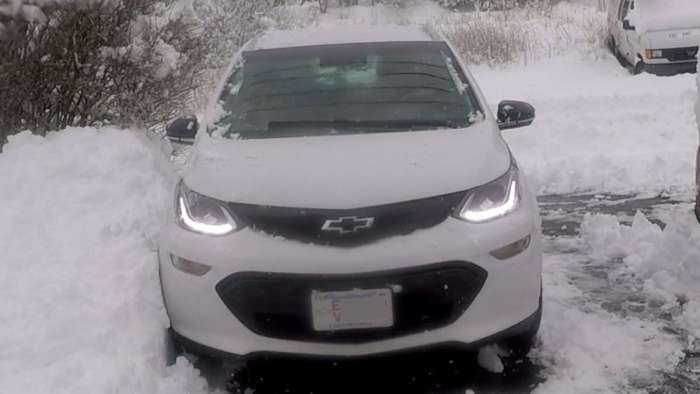 Winter is often held up as the Achilles heel of electric vehicles but the latest model updates from Hyundai and GM aim to significantly improve performance in cold climates.
Advertisement

It's amusing how quickly the phrase "Winter is Coming" entered the common lexicon, but it's not so surprising when you hear those words uttered by EV drivers.

The colder months are kryptonite to electric vehicles like the Chevy Bolt and Hyundai Kona Electric in areas of the country that freeze over during the winter months, reducing range and limiting the ability of our cars to fast charge at their usual rate.

Thankfully, automakers are taking steps to mitigate the annual assault of Jack Frost and improving the way their all-electric models perform in cold climates.

Both the 2020 Chevy Bolt EV and Hyundai Kona Electric will see upgrades designed to improve winter range and fast charging capabilities. Shortly before that, Tesla pushed an OTA update that helped the battery pack prepare for a cold weather Supercharger session.

Let's take a look at these updates and how they will help owners in the forthcoming winter months.

Tesla Sets the Standard
Even Tesla owners can't escape the impact of a cold battery, as their cars spend more of the battery's stored energy on managing the pack's temperature, heating the cabin, and potentially overcoming more challenging driving conditions with snow and ice on the road.

Similarly, stops at the Supercharger can be drawn out in winter as the car works harder to warm up the battery in an effort to help it accept a greater charge rate. After a snowy overnight stop in upstate New York last year, for example, my Tesla Model 3-owning father-in-law sent us a disappointed text from his morning charge session: "Supercharging not so super today."

That was a reference to seeing charge rates in the double digits, rather than the 120-130kW he was used to at the time. While those lower rates are about as good as it gets for the Chevy Bolt EV, A cold-soaked battery is anathema to any EV driver, even those who put their faith in Fremont.

Fast forward a few months, however, and Tesla does what Tesla does: fix things over-the-air.

Within a software update this past spring, the company included a feature called "On Route Battery Warm Up" to prepare the vehicle for colder temperatures. This should help a great deal this winter, as Tesla drivers can engage the feature when heading to a Supercharger so the car knows it needs to divert more power to battery conditioning. Upon arrival, the car should be ready to accept an improved rate of charge and limit the effect of freezing temperatures on Supercharger sessions.

That's great for Tesla owners, but what about the rest of us in the seat of EVs from legacy manufacturers like GM and Kia-Hyundai? As usual, the news is a bit less exciting but some of us will see some incremental improvements.

The 2020 Hyundai Kona Electric will see improved range in winter thanks to a battery heater on the upper trim levels. The car also includes a “Winter Mode,” which is designed to optimize battery temperature for the frigid months.

This is all good news for those of us driving electric in Canada and northern parts of the U.S. like New England, where this thermal management of a battery is essential. Such features offer peace of mind when the car has to be out in the open without the protection of a garage or carport. 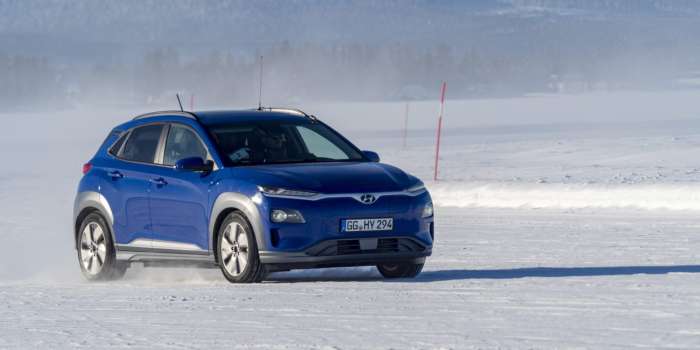 Although the Hyundai Kona Electric is barely a year old, buyers in Canadian could already get the battery heater, so Hyundai clearly understands how important it can be to some customers. The decision to omit the feature from the 2019 model is perplexing but it is nonetheless heartening to see a manufacturer listening to buyers and making the change for the next model year.

Although GM could stand to learn a thing or two on that front for some of the Chevy Bolt EV's other features, it seems as though they are listening to our seasonal concerns, as we'll see in the next section.

2020 Chevy Bolt EV Promises Improved Winter Performance
With the media drives complete and the first cars tested on a slightly chilly morning in the Pacific Northwest last week, it's encouraging to hear that GM is taking cold weather into account for 2020's mild refresh.

Reports indicate that a significant focus of introducing the 2020 Chevy Bolt EV last week was the model's improved winter performance. The headlines include the following:

This should make our seasonal range predictions for the 2020 Chevy Bolt EV even more achievable, while long trips during the colder months will also be more predictable thanks to the improved fast charging profile.

The Bolt EV already has a relatively slow charging rate compared to the likes of the Hyundai Kona Electric and Kia Niro EV. Any additional deterioration of the Bolt's fast charging rate is simply unacceptable and it appears the engineers understood this. If GM's claims materialize, driving a 2020 Chevy Bolt EV through the winter months will be a more comfortable experience than the previous three model years have been able to deliver.

What It Means for Future Models
If automakers had any lingering doubts about the importance of preparing their new all-electric models for extreme temperatures, the steps taken by Tesla, GM, and Hyundai should quickly dispell those notions.

Nissan has already paid the price for failing to address excessive heat in its approach to battery management and may struggle to regain the affordable EV crown it once held. Meanwhile, although a lawsuit against GM for cold weather range loss on the 2017 Chevy Bolt EV is unlikely to succeed, the company clearly understands the need to mitigate such winter performance issues.

When winter arrives, mainstream buyers will expect their electric car to work in much the same way it does the rest of the year. There are losses on combustion engine vehicles in colder weather as well, but those tend to be less visible than the specific number of miles lost on the dash of an electric vehicle.

EVs have the ability and technology to manage the battery pack for all but the most extreme temperatures. New models released in 2020 and beyond must leave the winter blues behind, by ensuring both the driving range and fast charging experience in cold weather are not significantly different from what owners can expect in the warmer months.

What features do you think are essential to optimize the cold weather performance of electric vehicles? Let us know in the comments.

John Goreham wrote on October 16, 2019 - 10:10pm Permalink
Great story. Having tested both affordable and also expensive BEVs in winter, it disappoints me that the other reviewers don't highlight the double-digit percentage battery range drop in their test reviews. Getting ahead of this issue is smart business. Eventually, the worm will turn and it will become popular among the press to report the actual miles driven vs, range miles.
Steve Birkett wrote on October 17, 2019 - 8:56am Permalink
Thanks John. One of the issues is that many BEVs also gain some significant range in the summer months, so the EPA average is probably the best way to not under- or overpromise on mileage. We'll typically get 20-25% less in winter and then see a similar gain in summer, so it all evens out unless you're much further north or in some parts of Canada. That said, it definitely falls upon reviewers to report where they're testing, conditions, and what their range looks like compared to estimates. I'm glad to see the likes of GM and Hyundai taking the challenge of extreme weather seriously.
Jean-Philippe A... wrote on October 17, 2019 - 9:43am Permalink
I'm in Canada so those aspects are really importants for me. I own a Bolt 2019. Do you think, for a technological point of view, that the new charging profile could be applyied to older Bolt via a software update? I mean, if the Spark can charge at 2.5C in almost any situation or temperature, could the Bolt charge closer to 1C in colder temperature and past 50% ?
Steve Birkett wrote on October 17, 2019 - 11:57am Permalink
It really just comes down to the battery heater being engaged for the required amount of time and how efficiently it does its job. Even in our 2017 Bolt, if we drive for several hours on a winter road trip, enough heat has been generated in the battery for the car to accept the normal rate of charge. The main issue is that we have no direct control over engaging the battery heater or how aggressively it works to bring the pack temperature up. In terms of will GM apply any changes retroactively to older models, I'd say almost certainly not. Nothing in their approach has suggested a willingness to improve older models. Even basic features like setting a target charge %, which your 2019 has, haven't been pushed back to older models like mine, so I don't see them changing something larger like the charging profile either.