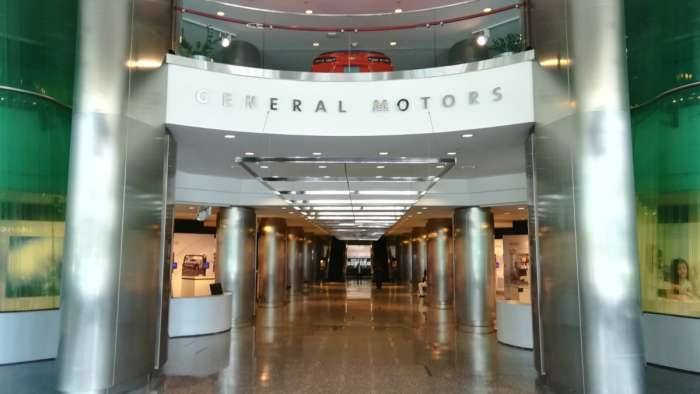 General Motors HQ Acknowledges the Future, But Puts the Past Up Front

A visit to the Renaissance Center in Detroit reveals a desire to drive electrification and new technology, but the most prominent displays show an inescapable dilemma for General Motors.
Advertisement

From location to layout, a company’s headquarters can reveal a lot about its values and priorities.

Apple has a space-age campus dedicated to new technology and research in Cupertino, CA. Nike has a sprawling Oregon HQ that is as much an athletics center as it is office space.

The Renaissance Center is, as the name suggests, an aspirational crown jewel in the heart of downtown Detroit. Comprising seven interconnected towers with other major tenants such as hotel chain Marriott and health insurance provider Blue Cross Blue Shield, the complex is primarily the home of General Motors, and locally known as the GM RenCen.

It also reflects the General’s corporate direction and priorities, sometimes directly, but also in more subtle ways that show where the company’s focus still lies.

A Nod to the Future and Advancing Automotive Technology
Let’s first focus on a positive: The Renaissance Center clearly signals that General Motors is committed to new technology and research.

Some of the exhibitions look back, like GM’s collaboration with NASA on Robonaut2, a project to develop humanoid robots for space travel. Many of them also focus on the future, such as the Cruise Automation project, dedicated to the development of self-driving vehicles, and displays tracking GM’s progress towards electrification and sustainable manufacturing.

Taken together, the various elements on display at the Renaissance Center do point to an automaker committed to staying on top of technology and even trying to push ahead of competitors in some categories.

However, not every item points to a brave new automotive world.

Here's what current owners want to see from the rumored Chevy Bolt EUV.

On the contrary, the most prominent displays are an obvious nod to where GM makes its money right now and, perhaps, why the brand’s plans for electric vehicles have yet to accelerate beyond the Chevy Bolt EV.

GM's Past is Still Present (and Prominent)
As much as General Motors would like visitors to stay focused on the future, the Renaissance Center still puts the company’s present up front and prominently displayed. The vehicles you’ll see upon entry to the gleaming, futuristic center are two gas-guzzling pickup trucks, a GMC Denali and a Chevrolet Silverado. 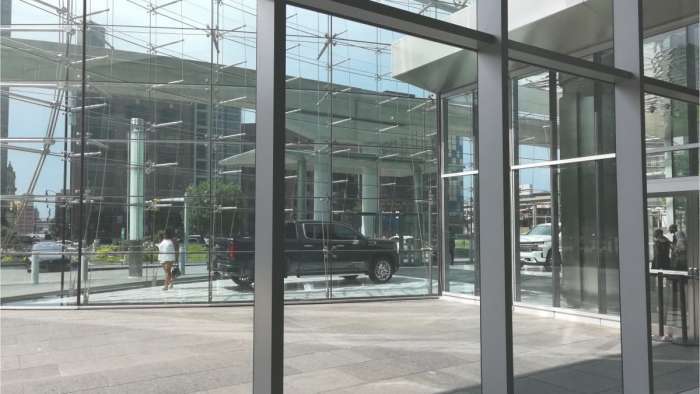 In a limited attempt to escape my EV bubble, let me acknowledge that General Motors is in a very different position to the likes of Tesla, Rivian, or indeed any new automaker working only on all-electric vehicles.

The majority of GM’s customer base, like most established car brands, is made up of people who want to buy combustion engine vehicles. More importantly, the most profitable of those vehicles are in the large SUV and pickup truck categories.

Despite the promise of many options to come in those categories, no automaker has made a car or truck to compete in those segments. The Tesla Model X and its $81,000 base price notwithstanding, at this point there are simply no EV options for the most popular vehicle segments in North America.

On the topic of electric pickups, here’s why the Rivian R1T isn’t the truck to convert mainstream buyers.

For context, while General Motors sold 8,283 Chevy Bolt EVs in the first half of 2019, it also moved 256,777 Chevy Silverado trucks in that same period. The number of Bolts that Chevrolet dealerships put on the road in that period is only 3% of the Silverado trucks they added.

The Transition Continues
In summary, while giving a 2019 Chevy Bolt EV pride of place up front at the Renaissance Center would certainly help EV drivers feel warm and fuzzy, it wouldn’t represent an accurate picture of where General Motors is today. 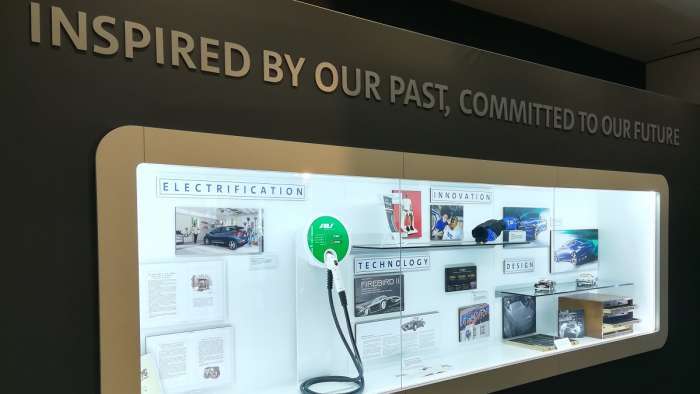 With its current models and vehicle range, it would be tough to see GM surviving if even half of its buyers suddenly shifted to electric vehicles.

Perhaps inevitably, some corners of the EV world lay a lot of the blame at GM’s door. “They killed the EV1!” and “The Bolt EV is a compliance car!” are common refrains from the more puritanical elements of our community.

The reality is more nuanced.

Any analysis needs to be rooted in the context of legacy automakers trying to stay profitable while still investing heavily in an initially expensive future, while all-electric startups fight tooth and nail to kick start a revolution on which the very life of their company depends.

While Tesla deservedly takes many of the headlines for accelerating our electric future and newcomers like Rivian inspire the next wave of electrification, established brands also have a role to play. Car buyers can be very loyal to their preferred automakers, so a range of all-electric options across models, manufacturers and vehicle categories is going to be critical to accelerate EV adoption.

Whether or not companies like GM are positioning to get ahead of the game or simply paying lip service to electric vehicles for branding purposes remains to be seen.

What we can say with certainty is that General Motors unveiled what would become the best-selling plug-in hybrid back in 2010, was first to market with an affordable long-range battery electric vehicle in 2016, and has promised to deliver 20 new EV models by 2023.

With those achievements alone, GM has positioned itself for an all-electric future, even if it does choose to greet its visitors with gas-guzzlers.

What do you think about GM's commitment to new technology and electric vehicles? Let us know in the comments.

See you in the next story for more EV news and analysis.

DeanMcManis wrote on July 8, 2019 - 1:55am Permalink
Yeah, it's just the reality of the current automotive market. Even though EVs in general are getting a lot of buzz on the internet, they still only comprise under 3% of new car sales. Which is why GM and all other major automakers reserve the bulk of their advertising budget and resources to their models that have the highest sales volume and profit. The Chevy Volt and Bolt were no more compliance cars than the Nissan Leaf and Toyota Prius. These were all cars that were built to openly compete against gasoline cars, as opposed to regular compliance cars like the Fiat 500e, Honda Fit EV, Golf EV and Ford Focus EV. But GM's early commitment to EVs has dropped off recently with them killing off the Volt, leaving only the Bolt to satisfy EV buyer's demand. We know that the demand is there because of the high Tesla sales, and also companies like VW creating their dedicated EV platform (MEB) to sell a whole line of BEVs, plus they are serious as seen by VW creating their Electrify America's chain of EV charging stations across the country. We have read rumors about the upcoming Bolt EUV, as well as promises of several Cadillac BEVs coming out. But if GM put out a fraction of the buzz of the 2020 Silverado and C8 Corvette on their upcoming BEV products it would be a dramatic change. Predictably, they are following the easy money, as usual. And their Renaissance Center reflects that mindset.