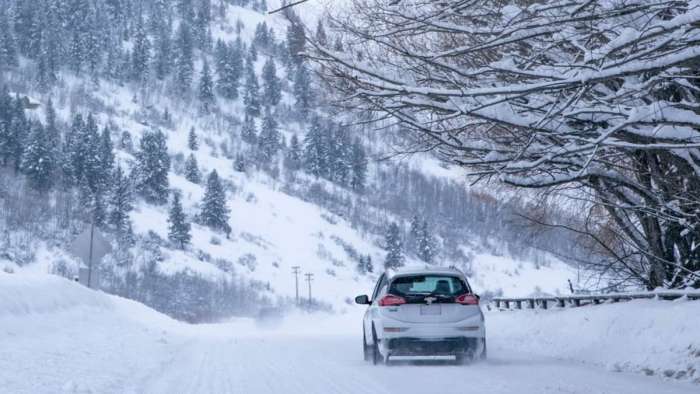 Chevy Bolt EV vs. Alaskan Winter: There's Only One Winner According to this Owner

A Chevy Bolt EV owner in Alaska took to the car's Facebook forum to share his experiences at temperatures of -33°F/-36°C. The outcome provides a counterpoint to the popular criticism of electric vehicles in winter conditions.
Advertisement

Mass media outlets don't lend a great deal of coverage to electric vehicles, but when they do it typically trends towards the negative. Range and charging times tend to be the lead topics for criticism, especially when the winter rolls around and lithium-ion batteries lose some of their mojo.

Thankfully, there are plenty of dedicated owners out there willing to share their real-world experiences with highly capable electric cars like the Chevy Bolt EV. Kirk Martakis is one such owner, but he has a distinction that few others can claim: he drives his electric vehicle in the challenging conditions of the Alaskan Range. 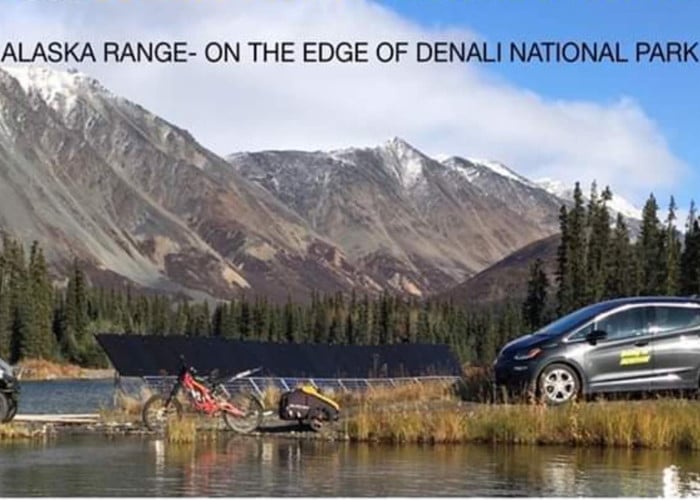 Owning a Chevy Bolt EV in Alaska
The very fact that a Bolt EV is navigating the far-flung, frigid and snowy roadways of Alaska is a credit to the manufacturer in itself. While other affordable non-Tesla models like the Kia Niro EV and Hyundai Kona Electric are being slowly trickled into ZEV states, GM has been open to selling the car in all fifty states for almost three years now.

That doesn't mean the Bolt EV is a common sight in every region - or that all Chevy dealers are doing their part to sell it properly - but someone who wants the car should be able to find it, regardless of location. Even so, Martakis admits he didn't know what to expect from his 2017 Chevy Bolt EV given the extreme conditions of his region.

Of the initial purchase decision, he says this:
"I had no idea what to expect or how it would perform, especially in winter." That uncertainty extended to pondering his local grocery run, which demands a 68-mile round trip to a "nearby" town.

He need not have worried. Even on the coldest days that Alaska can throw at him - and at an elevation 2,200' above sea level - Martakis gets the range he needs from his Bolt EV and frequently chooses it over the combustion engine alternatives he has at his disposal. In fact, sometimes it's his only option.

Chevy Bolt EV vs. Winter in Alaska: Who Wins?

Although Martakis reports range in the low one hundred miles on the harshest days of an Alaskan winter, he similarly confirms seeing 300 miles or more when the summer months arrive. While those extremes reflect some of the concerns raised by potential EV owners before they make the jump to electric, they also show that a well-engineered electric car will far exceed expectations in optimal conditions.

Back to winter, though, and the Chevy Bolt EV is a clear winner when it comes to the vehicles available to this Alaskan household.

During a recent cold snap, when temperatures plummeted to a spine-tingling -33°F in his area, Martakis found that his Bolt EV was the only vehicle able to start at such low temperatures. Even more impressive, though not the best approach for battery health, is that the car wasn't plugged in overnight. That means the battery pack was effectively going from a standing start, as the Bolt EV's battery heater does not typically go to work until the car is turned on. 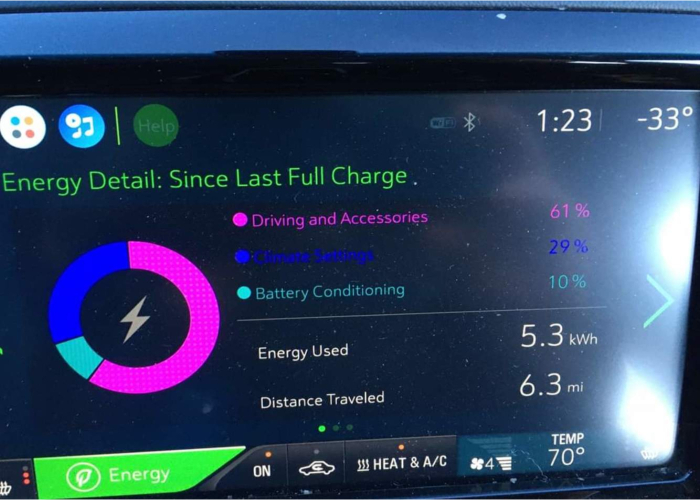 With a cold-soaked battery, any electric vehicle will initially experience limited performance and take time to achieve a regular DC fast charge rate until the battery is warmed up. Martakis does report a warning message from his Bolt EV, advising him to plug in before the car could be started due to the aforementioned cold battery. After taking the time to pull some juice from the wall (see the image above detailing energy usage), however, and to warm his cabin as any driver would do in cold weather, the Chevy Bolt EV was the only car he could get to start in such low temperatures.

"Electric is a Much Better Way"
Contrary to the popular myth that electric cars must simply be stowed away in cold weather, patiently waiting for the mercury to rise before creeping out of their warm winter bed, this owner finds EVs the best way to navigate an extremely cold climate.

"Electric is a much better way to get around in winter's bitter cold," he reports in his post, "and I say this from three years of [driving] both electric and gas engine rigs around the Alaskan Range."

Given the obsessive focus on range and charging speeds, it's understandable that headlines from many outlets tend to paint winter EV driving in a negative light. The simple fact that we're always so focused on range means that any significant drop is shouted from the rooftops, while outperforming those EPA estimates in better conditions is dismissed as a rare case of good fortune.

Having also driven a 2017 Chevy Bolt EV through three winters now, albeit in New England and not nearly as harsh as those in Alaska or Canada, I can confirm that we rarely see anything lower than 180 miles on a full charge. By contrast, when the temperatures here rise into the mid-40s Fahrenheit and above, from roughly March through to early November, we're back to easily beating the 238-mile EPA range and pushing on to the 300-mile club during summer.

Watch how our Chevy Bolt EV handles the New England winter in the video below.

With the 2020 Chevy Bolt EV raising that average range by 10% and the seasonal range predictions for the latest model looking even better, it's fair to say that things are only heading in one direction.

If an aging Bolt EV can handle the harsh Alaskan winter, we can't wait to see what owners of the 2020 model year experience when they get one up to the Great White North!

Have you driven a Chevy Bolt EV or another electric vehicle in harsh winter conditions? How do you find the experience of driving an electric car in cold weather? Let us know what you think in the comments.

Steve Birkett is an electric vehicle advocate at Plug & Play EV. You can connect with him on Twitter at @Plugandplayev, Instagram to send EV news and suggestions. You can also subscribe on Youtube to the Plug & Play EV Channel. Read most of Steve's stories at Torque News Chevy Bolt coverage. Search Torque News Chevrolet Bolt for Bolt EV news from our automotive-expert reporters.

Craig Alberhasky wrote on January 25, 2020 - 9:10am Permalink
Nice to know that there are positives about EV's in frigid climates. We own a plug-in Prius Prime and it is by far the best car we have ever owned. Wish it could go further on a charge but for the most part as a daily commuter for my wife, the gas engine is rarely engaged. One of the turn offs of the Bolt for us was the large black sensor box on the windshield behind the mirror. It really needs to be scaled down a bit because it is larger than the one on our Prius Prime Advanced and needn't be. I have a question though, has there been any rust problems with the Bolt? I haven't heard one way or the other. Anytime a family is laying out over $30,000 for any vehicle, there should never be rust for any reason. And you should never have to pay extra for under-coating and rust proofing. Anyway, very happy to see you are enjoying your EV in the great white north.
Steve Miles wrote on January 23, 2022 - 8:47pm Permalink
My 2020 Bolt in Minneapolis is a terrific city car. Range is about 100-110 miles when temps are in the -10 to 10 degrees range. The battery is subject to the recall so charging is m limited to 80%. The range of course is lower than 110 under actual driving conditions because of the power demands of electric seat heaters. An EV is the easiest way I know to drop a carbon footprint by 2 tons.
Craig Alberhasky wrote on January 24, 2022 - 8:52am Permalink
Glad you are enjoying your Chevy Bolt. Maybe a hassle now but after you get your new battery it will be like having a new Bolt again ... hopefully. We have never been to Alaska but it always has seemed like it must be a beautiful place to live. I personally have been very interested in the Aptera that is being developed and hopefully available by the end of 2022. My wife isn't so enamored with it though. Our next car, one way or the other will be an all out EV though.