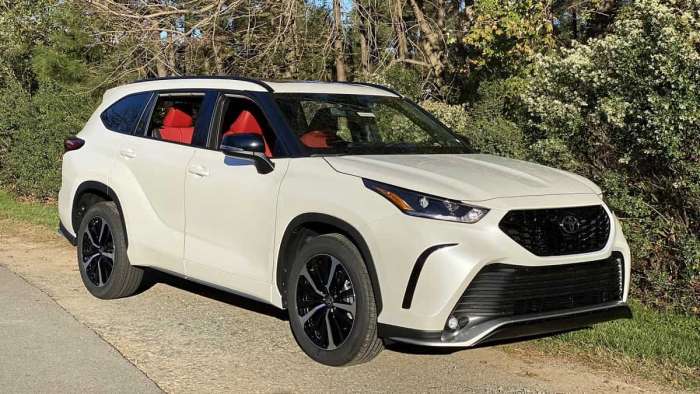 Toyota will build not one, but two, new SUVs with three rows. Electrified. What does this mean, though?
Advertisement

Toyota announced Wednesday the addition of two more vehicles to their United States lineup. One will be badged a Toyota, while the other will be a Lexus.

Both will be manufactured at Toyota’s growing Princeton, Indiana production facility. They will join Toyota Highlander, Highlander Hybrid, Sienna Hybrid and Sequoia.

And both are teased to be “electrified” in some way.

Both new Indiana SUVs are scheduled to be built “with the active Gen Y American Family in mind,” to quote the Toyota press release Wednesday.

Look for both the Toyota and the Lexus SUV to be all-new and with three rows of seating (up to eight passengers). To me, this is interesting because there may be a need for a vehicle somewhere between the size of a Highlander and the larger Sequoia.

And what about this “targeting the active Gen Y family” reference?

YOU MAY ENJOY: Key reasons to consider a 2021 RAV4 XSE Hybrid

Toyota plans for both vehicles to contain some degree of hands-free driving in certain situations. Also plan to see a state-of-the-art remote driving system where people can park and unpark their vehicles when outside their cars – all from their smartphones.

This is crazy stuff folks.

Oh, and this new Toyota SUV will feature a digital key where people can transform their smartphone into this same digital key. They can even transfer this key digitally to family members and friends as needed.

Sounds like an evolution of current Toyota Remote Connect to me. Sort of like how Toyota Safety Sense keeps evolving and is at TSS 2.5+ now.

This new SUV sounds good so far. But we still do not know what it is. Or what it will even be called. Or do we?

I wrote a Torque News story a few months ago revealing that Toyota applied for the trademark name “Grand Highlander.”

What may have been mere speculation, and what may still be just that, could eventually come to fruition.

Is there a chance this announcement by Toyota of a new three-row, eight-passenger SUV could also involve the name “Grand Highlander?”

There certainly is the need for a vehicle like this. One that is smooth and quiet and comfortable just like 2021 Toyota Highlander. But one that also has the space for more third-row passenger room and greater cargo capacity.

And a hybrid at that. Or a plug-in hybrid. Or possibly an all-electric.

Time for your Toyota comments

Here is the official Toyota press release for more specifics.

It is fascinating to me that Toyota now plans on manufacturing 70% of all its cars, trucks and SUVs with some form of electrified power plant.

This could mean traditional Toyota hybrids, hydrogen fuel-cells, battery electric, or other form of electrification like plug-in hybrid electric vehicles.

What type of vehicle do you think would best fit into the Toyota lineup at this point?

Maybe like a Highlander Prime. Now THAT would be cool.

Michael Brennan wrote on April 29, 2021 - 5:16pm Permalink
Hi Jeff, Great article. Very nice to see Toyota continuing to supply customers with very reliable vehicles to all demographics. I'll have me eyes peeled like a boiled potatoes for these new vehicles on the road. Be well.
Pascal Mutabazi wrote on April 30, 2021 - 3:41pm Permalink
Hi Jeff, Your Youtube channel is one of my top favorites whenever looking for new updates on Toyota brand. Jeff, I am wondering, when Toyota will release a Tacoma Hybrid? Is that really something they cannot do? I am planning to purchase a Tacoma but it has to be a hybrid or an electrified one in order to save on fuel cost. Please, let me know your feedbacks.
LeoC wrote on April 30, 2021 - 11:14pm Permalink
“Active” gen Y family... I hope it’s a 4Runner prime!! Imagine a 4Runner with 30 MPG and a battery big enough to support microwave and video games while car camping!
Ed B wrote on May 7, 2021 - 10:46am Permalink
Hey Jeff, good article. You read my mind on the Highlander Prime - I think that would be an excellent evolution of the Highlander.