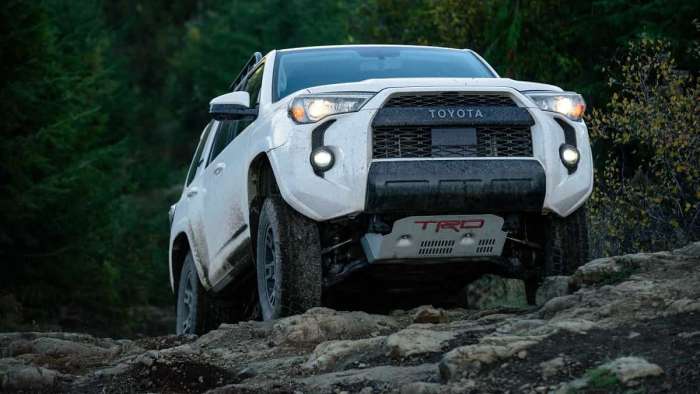 Toyota 4Runner and multimedia fans should be thrilled, as the 2020 Toyota 4Runner will be updated with the latest applications like Android Auto and Apple CarPlay. What else is next for the immensely popular SUV?
Advertisement

The Toyota 4Runner is the one Toyota model I call a sure thing. Although it is one of the least-advertised Toyota models on the market, car shoppers just seem to know where to find it and remain fiercely loyal to this body-on-frame SUV. One of the last true SUV’s on the planet. I call it a cult-like following.

Perhaps this 4Runner phenomenon is due to its long-term reputation for quality, reliability and dependability. This is one reason 2019 4Runner ranked #5 on KBB’s list of 2019 Top Resale Value vehicles (#1 on the list is 2019 Toyota Tacoma and #3 is 2019 Tundra). Pretty strong resume.

This fall Toyota will update the 2020 Toyota 4Runner with important multimedia and safety changes. While remaining largely unchanged for the last many years, what else could be in store for the next 4Runner?

Watch 6 Changes Coming To 2020 Toyota 4Runner and Subscribe to Torque News Youtube for Daily News on Toyota and Automotive Industry.

The 2020 Toyota 4Runner updates we know so far

Although wildly popular with SUV owners, the one main critique for the 2019 Toyota 4Runner is the need for upgraded safety and technology. You asked for it and you are getting it.

Toyota is adding both Apple CarPlay and Android Auto to its 2020 4Runner model year. These applications make in-vehicle multimedia use both safer and more convenient. Also, look for Amazon Alexa compatibility as well.

I would expect this multimedia improvement to also increase the size of 4Runner’s touch screens. I would be surprised if Toyota carries over any of its 6.1” screens found on all levels of the 2019 4Runner. Expect to see 7-inch and 8-inch screens across the board. The 2020 4Runner TRD Pro has already been announced with an 8-inch screen.

For people concerned with safety, Toyota Safety Sense-P (Pedestrian) will be added to all trim levels of the 2020 Toyota 4Runner. This will include pre-collision system with pedestrian daytime detection, automatic high beams, dynamic radar cruise control and lane departure alert with sway warning (do not expect it to have steering assist which nudges your vehicle back into its lane).

TSS-P features a camera located just inside the windshield and a sophisticated radar located within the grille. These systems work together to drastically reduce the potential for front and side collisions, as well as nighttime driving accidents. For example, you will find the radar just below the “TOYOTA” logo on the grille of 2020 4Runner TRD Pro.

Expect to see Toyota and JBL continue their partnership with Premium JBL Audio. The 2019 4Runner is optionally equipped with 15 JBL speakers with subwoofer and amplifier. Your car’s sound quality dramatically improves when you “JBL upgrade,” as it features concert-like quality right in your vehicle. I suggest car shoppers test it out while at your local dealership to see what you think.

SiriusXM will be featured in all grade levels of 2020 Toyota 4Runner. Toyota is gradually phasing in standard SiriusXM across all trims for every one of its models, beginning in August of this year. This movement should be completed by May of 2020.

Did someone say Army Green?

Toyota has already announced a plan for symmetry within its truck and SUV TRD Pro lineup. The 2020 Toyota Tacoma will feature Army Green as its exclusive color this upcoming model year. With the all-new 2020 Sequoia TRD Pro speculated to feature Army Green as well, will 2020 4Runner TRD Pro and Tundra TRD Pro also be seeing (Army) Green in their futures? I think an Army Green 4Runner would look fantastic.

All trim levels should see a new grille but not completely different from this current 2019. They will be tweaked to incorporate the radar for Toyota Safety Sense.

What about the powertrain?

As the 2020 model is not a full re-design year, Toyota 4Runner will continue with its 4.0-liter DOHC 24-valve V6 engine with dual independent variable valve timing with intelligence. This delivers 270 horsepower and 278 lb.-ft. torque. This engine works with a 5-speed electronically controlled transmission.

All this talk about refreshed and re-designed new 4Runner models has gotten me to thinking. When the time comes for a full Toyota 4Runner re-design, what do you think will be the way to go? Should Toyota keep the current 4.0-liter engine and 5-speed transmission, or should they bring in a completely new powertrain?

What has your experience been with Toyota 4Runner? Do you plan on buying one within the next year? What do you think of the updates for 2020 and what would you like to see happen with a re-designed 4Runner?

Thanks for reading everyone. Please bookmark Torque News Toyota News and Reviews, as I will continue bringing you each new update for all Toyota models as they are announced. See you next story...”and a Bababooey to you all…”