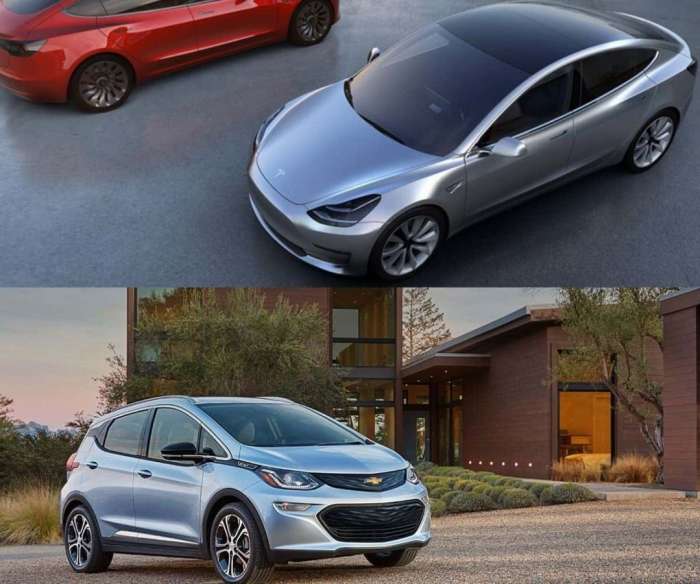 Tesla Model 3 Vs. GM’s Chevy Bolt: Who is the King of Fast Charging

In the last few days, articles were published that mentioned a new charging standard being developed by GM. These “extreme fast EV chargers” shall enable electric cars to refuel at speeds of “180 miles in 10 minutes”. While the proposed technology is certainly interesting, this seems to be yet another “too little, too late” effort by a company that has fallen far behind.

Basically all current electric vehicles use some form of lithium-ion battery to store their energy. When we talk about charging speeds, we are usually interested in miles added per hour. This quantity does not only depend on the charger itself but also on the efficiency of the car. For example: the all new Jaguar I-PACE has an energy capacity of 90-kWh - that means its battery can provide 1,000 watts of power for 90 hours. With this amount of energy the I-PACE can travel 220 miles (on the EPA test cycle). Hence it uses 41-kWh per 100 miles. A six year old first generation Tesla Model S 85 on the other hand has an energy capacity of 85-kWh. This allows for 265 miles of driving. Hence it only uses 32-kWh per 100 miles. The Chevy Bolt does really good with 25-kWh per 100 miles, and the Tesla Model 3 Long Range is the king in this comparison with an efficiency of 24-kWh per 100 miles.

If you would charge all these cars with the same constant 30-kW charger, these cars would perform very differently while charging. Assuming no losses, we find charge speeds that range from only 73 miles per hour for the Jaguar to as fast as 125 miles per hour for the Tesla Model 3. In order to charge electric cars quicker, you need a higher power charger. At 60-kW, all cars would charge twice as fast. And the announced development of 400-kW chargers by GM would be a revolution in charge times. Right? Wrong.

The limits of EV fast charging

Charging lithium-ion batteries rapidly can be quite challenging for manufacturers. The faster the charging, the higher the temperature of all systems involved. As a result, two factors play a major role in a car’s ability to fast charge.

1, cooling. Heat accelerates the chemical degradation within the batteries which can lead to a reduction of capacity or even to a complete failure of the battery pack. Based on the detailed composition there is an ideal temperature range for the batteries to operate in. If you charge batteries fast, they heat up. To counteract the effect, many manufacturers install a liquid cooling system so that the battery pack does not overheat during fast charging (Nissan does not). The presence and effectiveness of this cooling system will limit the charging speed of the electric car.

2, cables. The more power you send through a cable, the more stress it puts on the cable itself. A lot of energy in a short time will cause the cable to heat up or even melt. That is how a fuse works: if too much power is drawn by a system, the fuse just melts (or evaporates) and the electric circuit shuts down. Obviously, you have to design the cable of your charger in a way that it is capable of handling all that power without overheating. But the car manufacturer also has to design the cables from the charge port to the battery so it can withstand the power transfer. Thinner cabling inside the car can increase the charging time significantly.

Taking these factors into account, a battery electric car “asks” a charger for a certain maximum power so that it does not damage any internal systems. The charger than delivers that power if possible. This is why the Chevy Bolt will not benefit from the newly proposed 400-kW charging infrastructure. An extensive test showed that the maximum charge power ever requested by a Chevy Bolt was 46-kW (or 30 miles in 10 minutes). On top of that, if the battery is at a charge level of over 50%, the maximum requested power is gradually lowered. At 70% state of charge only 24-kW are requested; above 80% the power drops below 20-kW. So it seems that even under ideal conditions, the Chevy Bolt may never be able to charge faster than 50-kW which equates to 33 miles in 10 minutes. This limitation remains in effect even when connected to a future 400-kW DC extreme fast charger. And keep in mind that this DC fast-charging port is a $750 option. If you don’t have this option, or you connect the Bolt to a normal charger at your workplace, a grocery store or at home, it uses the 7.2-kW on-board charger. This fundamentally limits the charging speed to 30 miles per hour (or 5 miles in 10 minutes) and will usually be even slower than that. 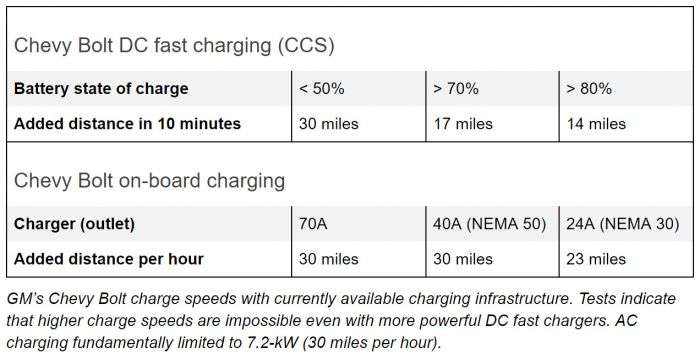 How does Chevy Bolt fast charnging compare to the competition?

The Tesla Model 3 comes standard with DC fast-charging. Charging speeds on the current generation Supercharger network are capped at 83 miles in 10 minutes (120-kW) if the battery is below 50%. Similar to the Chevy Bolt, the power is reduced for higher charge levels. A random test showed a power drop to to 85-kW above 70% state of charge; above 80% not more than 70-kW were accepted. For your normal everyday “slow” charging, the Tesla Model 3 Long Range uses a 16.5-kW on-board charger. This allows for a theoretical charge speed of 70 miles per hour. However, this does require a 70A / 240V charger - something that is not very common. For a more standard 40A charge current, the Model 3 will add 40 miles per hour. If you compare all these numbers to the Bolt, you see that the Model 3 charges way quicker than the Chevy Bolt in every situation. 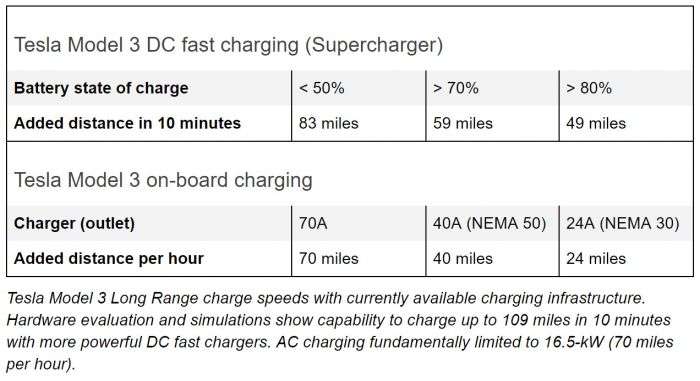 But the current charge speeds of the Model 3 might actually not be limited by the car but by restrictions in the power output of the current Superchargers. A recent tear-down revealed that the power lines within the Model 3 are capable of handling up to 157-kW continuous power. On top of that independent simulations show that the Model 3 battery pack can transfer twice as much heat as the batteries of the Model S. The study estimates that the cooling system would be able maintain design temperatures at charging of 157-kW. All this indicates that the Model 3 is already prepared for the 3rd generation Superchargers that will be deployed at the end of this year. With all pieces in place, charge rates would be as high as 109 miles in 10 minutes. This is not that far away from the mythical 180 miles in 10 minutes promised by GM three years from now. But again, while a more powerful charger may very well shorten the already excellent charging times of the Tesla Model 3 even further, current Chevy Bolts will almost certainly forever be stuck at the slow charge speeds of below 30 miles in 10 minutes.

The real story behind the new GM chargers

If you read the news about GM’s new 400-kW chargers, you may be under the impression that GM is spending 7 million dollars to innovate the future of 400-kW chargers. Nothing could be further from the truth. 3.5 million dollars of the program are paid for by taxpayers (U.S. Department of Energy). Delta Americas leads the program with GM just being one of many minor partners. Furthermore, the proposed technology is not really about the high power output - after all, 400-kW is only marginally more compared already existing 350-kW chargers in the U.S. and Europe. The key aspects of the new development effort are high “grid-to-vehicle” efficiency, small size and low weight while still providing a high voltage DC output. The proposal is based on solid-state transformers and these systems may very well play a major role in the future of battery electric vehicle charging. The Delta Americas press release also talks about how the three year project will “provide insight into how renewable generation can be integrated to avoid infrastructure strain on the power grid”. These are challenges that Tesla has already solved with the combination of solar cells and battery energy storage at Supercharger locations. Most of their new 3rd generation stations will be completely off-grid and provide 100% renewable energy. First and foremost the new project is a taxpayer sponsored attempt of GM to catch up with the already deployed super high power chargers by Electrify America and evaluate already proven regenerative and grid-protecting solutions by Tesla. The added research on new transformers that could make chargers smaller and lighter is a nice bonus, but it will not be a game changer of any kind.

And what about this compelling 180-miles-in-10-minutes figure? The press release states that the 400-kW chargers will enable “tomorrow’s long-range EVs” to charge 50 percent in just under 10 minutes. The 180-mile figure stems from an imaginary 360-mile EV. However, a battery which requires 400-kW to charge 50% in 10 minutes would have a total capacity of 133-kWh. This results in a a vehicle with a terrible efficiency. A Model 3 would require only 225-kW to charge 50% in 10 minutes adding 155 miles in the process. Working prototypes like the 200-kWh capacity 620-mile range new Tesla Roadster would theoretically be able to add 207 miles of range in 10 minutes on a 400-kW charger - while increasing the state of charge by only 33%. It becomes clear that the arbitrary “180 miles in 10 minutes” is a fictional number based on imaginary future vehicles. It’s main purpose: good headlines. Mission accomplished.

GM has fallen far behind

22 years ago, GM was a leader in battery electric vehicles. Forced by the california government it sold sold its first electric car - the EV1 - in 1996. However, just 3 years later and after relentless lobbying against the California Air Resources Board (CARB) the car was taken off the marked and all remaining vehicles were recalled and destroyed.

Although GM kept on working on hydrogen fuel cell and hybrid electric vehicles, it took them until 2013 to release their second full electric car, the Spark EV, which was limited to markets that forced zero emission vehicle mandates and production was artificially kept below 2000 cars per year. (Tesla released its Model S in 2012 and continued to sell more electric vehicles per month than GM per year.) GM's first more serious electric car effort was the Chevy Bolt which was released in 2017. But is the Bolt worthy of 21 years of development? The answer is no.

Tesla, a startup company with little resources and limited funding released their first electric car - a modified Lotus - in 2008. Just 9 years later, Tesla released a car that beats the Chevy Bolt in every aspect. The Model 3 goes 50 mph faster, is 2 seconds quicker, and charges 3 times faster. On top of that, the Bolt is more expensive to manufacture and almost none of the Bolt’s technology was actually developed by GM. 90% of the power train is supplied by LG, a Korean company. Compare that to Tesla which produces the entire powertrain including the battery modules and charging electronics in house, with just the naked cells being produced by Panasonic. It is more than obvious that GM did basically nothing at all in the 21 years they pretended to innovate.

With the Tesla Model 3 outselling the Chevy Bolt 12:1, it is encouraging to see that GM tries to join projects like the 400-kW solid-state transformer chargers, albeit as a minor partner. But only time will tell if this is lukewarm effort is enough to stay relevant in the future of transportation.

Correction: A previous version of the article incorrectly stated that the Chevy Bolt was the first electric car after the EV1. In fact, GM did release the Chevy Spark EV in 2013, 4 years before the Bolt. However, this car was limited to states that forced manufacturers to sell zero emission vehicles (CARB compliance car) and hence never intended as a serious product offering.