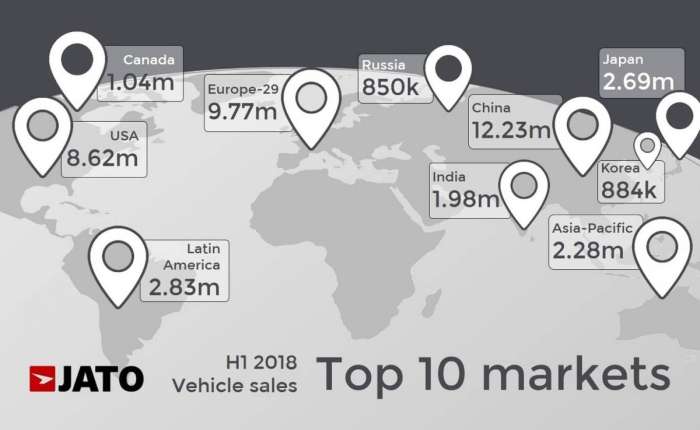 Ford F-Series ranks first again as the best worldwide selling car in the 1st half of 2018, showing an increase of 3% in comparison to the last year’s result. U.S. market is the third largest global car market.
Advertisement

A detailed market analysis report by automotive market intelligence specialists at JATO has been published, summarizing data for 57 markets around the world.

Ford has sold 534’827 of it’s F-Series trucks and it’s ahead of its main competitor Toyota Corolla by over 10% cars sold globally, followed by VW Golf with 431’834 cars sold. More models from the largest mainstream Japanese car manufacturers made it to TOP 10: Toyota RAV4, Honda CR-V and HR-V, Nissan X-Trail. Chevrolet Silverado completes the TOP 10 with 326’427 vehicles sold (+10%).

Almost 36% of the passenger cars sold globally during 1st half of 2018 around the globe were SUVs (14.95m cars), segment continued to grow by 14%. SUVs are established choices in the markets of Russia, USA and China, where over 40% of passenger cars sold are SUVs. SUV market grew in almost all of its key regions.

Compact car segment is the second largest (16%), however demonstrated shrinking in comparison to the year 2017 results. Third largest car segment is sub-compact (12%), which grew by 2%. MPV segment suffered double digit sales reduction (-13%) with 7.1% of the cars sold being an MPV. Most passionate sports-car segment continues trend of become niche for the car manufacturers, as only 0.6% of the car sales account to sports cars. Unsurprisingly so, Ford is the best selling make and Mustang is the best worldwide selling sports car model.

U.S. market among the largest

Recently we see quite a few auto manufacturers admitting negative influence of the uncertainty over potential trade war between largest economies to their sales. Despite the uncertainty coming from global factors, global car sales grew by 3.6% to total of 44.03 m cars sold worldwide. All world’s top 3 car markets China (12.23 m cars sold, +3.9%), Europe (9.77m cars, +3%) and U.S. (8.62m cars, +2%) have shown growth. So did the now 4th largest car market in the world India.

Analysts at JATO comment on the factors U.S. influencing car market: “Growth in the USA has been more moderate, despite the economy performing above expectations. The strong economy combined with low unemployment and tax cuts boosted the car market, which posted the second highest first half of its history this year”.

Provided current political uncertainty does not escalate and general world economy growth trend remains, we might see some record market sales numbers by the end of 2018.