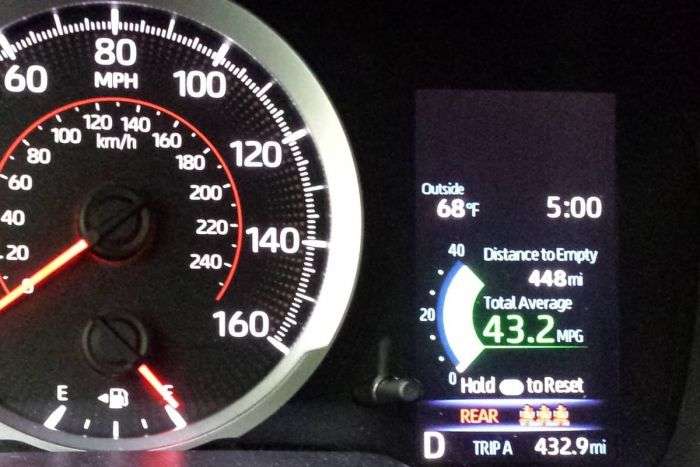 We test the new 2019 Corolla Hatchback SE and come away amazed at its real-world fuel economy.
Advertisement

Toyota's new 2019 Corolla Hatchback SE is just about to go on sale in America. This is an all-new car with an all-new drivetrain that will replace the outgoing Corolla iM. Torque News' Senior Editor, Patrick Rall, attended the press launch of the new Corolla Hatchback and titled his summary of the new car, "The Most Exciting Corolla Ever" after driving the top XSE trim. We have now conducted a full week of testing and the biggest surprise aside from its amazing ride is the 43 MPG we recorded in real-world driving.

Our tester was the base SE trim with the optional Dynamic-Shift CVT transmission and SE Preferred Package. That added up to a price with destination and delivery included of $23,410.

This isn't our first rodeo, so we never trust the average MPG displayed in any car. The value displayed can vary quite a bit from actual MPG and are always "optimistic." During our testing, we covered 399 miles and consumed 9.27 gallons of regular unleaded fuel. That equates to 43.04 MPG. To Toyota's credit, the display was very close in this case.

During our test we used the AC almost constantly and covered both suburban and highway routes. We also did some in-town driving, but nothing one would call "city driving." Frankly, we avoid driving in the city. Although our driving would be called "legal", it was "spirited." We certainly did not hypermile, nor did we try to conserve fuel in any unusual way. We did use the adaptive cruise control at times, but our estimate is that we used it on only a small fraction of the highway miles. We enjoyed the Corolla, and had many quick getaways from stoplights and floored it on a few on-ramps when the situation warranted it.

43 MPG in a non-hybrid vehicle in real-world driving is very unusual. In 2012 we tested a Lexus CT200h hybrid the same approximate size as this Corolla and measured only 42 MPG.

Not only did the new Corolla beat the Lexus Hybrid, it tops our real-world combined MPG in a 2015 Golf TDI diesel. In that vehicle, which uses more expensive fuel ($3.20 compared to $2.86 in our area this week) we measured 41.9 MPG in the same real-world area and loops. That was, of course, before we all found out VW was cheating on emissions with those diesels.

The 2019 Toyota Corolla Hatchback SE with the CVT transmission will have an EPA-estimated rating of 32 City, 42 Highway, and 36 MPG combined according to Toyota.

Patrick wrote on June 6, 2018 - 9:11pm Permalink
Did your 2019 Corolla Hatchback SE test car come with the CVT or 6-speed manual? Regardless of transmission that is EXTREMELY impressive gas mileage. Perfect car for today's higher fuel prices!
John Goreham wrote on June 7, 2018 - 7:01am Permalink
CVT
Patrick wrote on June 6, 2018 - 9:18pm Permalink
What size (capacity) is the fuel tank on the 2019 Corolla Hatchback SE?
John Goreham wrote on June 7, 2018 - 7:02am Permalink
13.2 Gallons is the official number. The range seems to be about 500 miles. I traveled 400 and had a quarter tank left when I refilled.
Brad wrote on June 10, 2018 - 7:49pm Permalink
Buying this car the instant it is released. And this just makes it all the better.
Patrick wrote on June 12, 2018 - 2:21pm Permalink
John - during the week that you spent with the 2019 Corolla Hatchback SE did you ever at any point feel that it was excessively noisy or that too much road noise made its way into the cabin? I ask because I've heard/read that the XSE gets more sound deadening material over the SE. Thank you.
John Goreham wrote on June 12, 2018 - 3:01pm Permalink
Good question. No, the car I drove was very quiet for any vehicle, and particularly for the price point. I have not driven the XSE yet. It may be more quiet, but it also has larger wheels and low profile tires. Which concerns me. Some reports I have read, including from Consumer Reports, mention a stiff ride.
Patrick wrote on June 13, 2018 - 1:41pm Permalink
John - How would you describe the ride quality of the 2019 Corolla Hatchback SE? Is it smooth and refined even over rough pavement? I had a 2017 Civic hatchback EX and the ride quality was poor and it was loud and unrefined. I ended up getting rid of it because I was experiencing too many problems with it in addition to the issues I mentioned previously. Thank you.
John Goreham wrote on June 13, 2018 - 3:25pm Permalink
Outstanding. I credit the "normal" profile tires with part of the reason.
Leah C. wrote on June 19, 2018 - 12:38pm Permalink
Hi John, Sounds like a very enjoyable ride. Do you know if any of the Trims will offer an option for a moonroof? I believe the European version has a panoramic sunroof option. I am hearing that here in the states there will be no option for a sunroof. Not sure if thats true. Thank You!
Patrick wrote on July 19, 2018 - 6:35pm Permalink
John - I've now test driven 4 different 2019 Corolla Hatchback SE's with CVT and came away EXTREMELY impressed!!! Toyota really did a superb job with the design, ride and handling, comfort and performance. The seats are the most comfortable I've ever had the pleasure of sitting in! The entire car oozes quality everywhere you look and touch. The ride is very, very smooth and it corners very flat. I also test drove the XSE (with 18" tires/rims) and the ride quality deteriorated (stiffer/harder) somewhat. The SE is the one I would get for sure! It comes with most everything the XSE has except the 18" tires and a few smaller details.
Brad wrote on July 23, 2018 - 1:37pm Permalink
Test drove the SE today as the dealership didn't have the XSE in stock. Walked away impressed enough to purchase the XSE as it has features I want like blind spot detection (available as an option on SE but good luck finding the one you want), dual climate control, leather, etc. The things that I wanted the most though in a car in general was the technology like adaptive cruise control and assisted braking. First time I've driven with this technology and wow, so happy to be getting it.