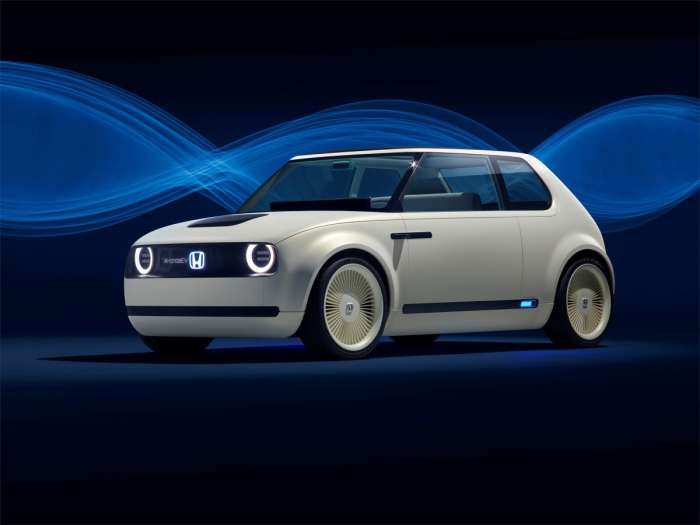 Despite Tesla being busy sorting out their Model 3 production issues, electrified vehicle sales figures, especially driven by plug-in market, keep setting consecutive records in U.S. This month Honda Motors announced Honda Urban EV Concept was named ‘The Best Concept Car’ in the 2018 Car Design Award honors, as part of the Turin Motor Show. Honda might have a trick up its sleeve - Urban EV Concept is stylish and may become an EV people would actually want to buy.
Advertisement

This doesn’t come as a surprise for us. If you were in the marked for your next EV today, chances are you’d be looking at already mentioned Tesla Model 3, Chevrolet Bolt, Nissan Leaf, BMW i3, maybe Fiat 500e. Without adding plug-in hybrid electric vehicles (PHEVs) to the list, statistically, this completes U.S. TOP 5 EV sales chart for the current months of 2018. How many of those listed options you’d actually want to buy?

As we previously covered, Honda Urban EV concept debuted at 2017 Frankfurt Motor Show. We happened to see in the flesh at Geneva International Motor show earlier this year. Crowds wowed and we could not help ourselves falling in love with it too. Now International panel of automobile experts awards it’s design again, this time as ‘The Best Concept Car’ in the 2018 Car Design Award honors and this happens at the pinnacle of automotive design industry - Turin, Italy. This is another sign Honda is going the right direction with implementing it’s ‘Electric Vision’ strategy. This strategy includes the development of a dedicated electric vehicle platform, featuring fully-electric Honda powertrain technology. By saying the right direction, we mean direction heading straight to people’s hearts.

Urban EV is still a concept, understandably some of the design features will be lost when switching to production design. In the concept form, its low and wide proportions present a sporty stance, while the contemporary styling incorporates slim A-pillars and a wide windscreen that appears to sweep around the entire front end of the cabin. Entry and exit from the vehicle is via rear-hinged coach doors. At the front of the Urban EV Concept, interactive multilingual messages can be displayed between the headlights, including greetings, advice for other drivers on the road, or charging status updates. We would not expect much of this make its life into production.

“The Honda Urban EV Concept is a wonderfully judged piece of design which brings a much-needed sense of personality to the EV space,” concludes the joint statement from the Car Design Award jury. “Its clever blending of both retro and futuristic aesthetics gives it an undeniable desirability that few can compete with” statement concludes.

Chances of seeing the Urban EV on U.S. roads

Honda Motor confirms Urban EV Concept will be the first pure electric car to go into series production in Europe. This is logical as Europe electrifies rapidly. There are is official confirmation from the manufacturer if its ‘Electric Vision’ strategy includes offering production model of Urban EV to U.S. market, so currently it’s only speculations. On one hand, car has a really small footprint which make the car more positioned to Japanese local or European markets. On the other hand, EV marked in U.S. expands, Honda export from Japan to USA figures correlate with that trend showing consecutive increase (+157.9% year-to-date Jan-May vs. 2017) and Fiat already sells its similarly sized 500e here.

Range of EV is usually an aspect to consider too, however Honda gets your expectations adequate, as it markets the car as an urban vehicle.

This might be a brave statement, but this little cute Urban EV in its concept form seems to have everything needed to become cult hit. If only Honda manages to find the way for the key design features of Urban EV Concept to survive transformation into production version, chances are it will find enough environment conscious loving hearts here in U.S. Credit goes to you, Honda.

DeanMcManis wrote on August 4, 2018 - 4:04am Permalink
So much of this car's viability will depend on it's electric range and price. And neither of these items are mentioned in various reports on this car. It looks as if the car will be built, but the only confirmation for delivery is to Europe so far. The styling is interesting, but of course it is concept styling, meaning no rear view mirrors and lowered. The interior looks spartan, but clean. It would be great to see this car come here as an entry level BEV, priced under the Clarity. The Clarity BEV's range is 89 miles, which is OK for a city grocery getter. But unless the price is low it will be hard to compete against cars like the Leaf (150mi) and Bolt (238mi).