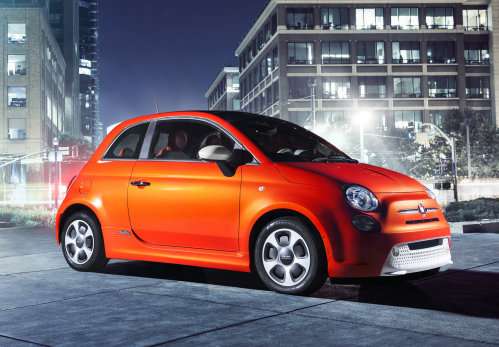 The first images of the 2013 Fiat 500 Electric surface

The folks at the Chrysler Group released the first two official images of the upcoming 2013 Fiat 500e – the all electric subcompact set for an LA Auto Show debut that will allow Chrysler to keep up with the likes of the Chevrolet Spark EV and the Ford Focus Electric.
Advertisement

We brought you the news late last month that the LA Auto Show organizers had announced that the 2013 Fiat 500e would debut at the upcoming 2012 show set to begin late this month but these first two images of the electric Fiat come straight from the company itself. While these two pictures of the 500e don’t show us everything – they leave little to the imagination ahead of the big auto show debut. Interestingly, the production 500e appears to take a very different design route from the 500 Electric Concept that we saw in Detroit in 2010.

Overall, the 2013 Fiat 500e looks a great deal like the rest of the Fiat 500 lineup but unlike the 500 Electric Concept that sported an Abarth style front fascia, the production 500e wears a unique lower front fascia sporting a larger perforated area painted a contrasting white hue. We surmise that this unique lower opening allows for better cooling and better aerodynamics while also giving the 500e some attitude of its own. Further enhancing the aero properties is a front underbody lip, lower side skirts and a low profile rear spoiler along with unique wheels that we can assume are both lightweight and aerodynamic. Aside from the white mirror caps, rear spoiler and lower front fascia, the Fiat 500e is finished in a stunning metallic orange exterior paint that we would love to see become a production reality (although no color like this is currently offered by the American Fiat brand.

On the inside, the 2013 Fiat 500e looks to be pretty much identical to the normal production 500 with identical dash controls, seats, steering wheel and stereo system all of which are clad in orange and white while there is a flare of the uniqueness expected of an electric vehicle in the form of the push button shifter and gauge cluster. The push button shifter gives the driver his or her choice of Park, Reverse, Neutral and Drive each on different buttons on the unique panel mounted in place of the tradition gear shifter from non-electric Fiat 500s.

The large, dial-style speedometer and tachometer of the standard Fiat 500 are gone as is the central driver information center – all of which are replaced by what looks to be a digital screen (perhaps another thin film transistor (TFT) display like the one found in the new Dodge Dart) with battery power shown on the left side in green and the vehicle speed displayed at the top middle. This gauge cluster appears to offer more information but beyond the date, time, gear indicator and outside temperature – it is tough to tell what else will be included here. The lower box that is cut off will likely include things like trip mileage and range estimates but we will have to wait for LA to know that for sure. The gallery on the right (click any thumbnail for a closer look) includes a close-up image of the gauge cluster, as well as the full interior.

The 2013 Fiat 500e will make its grand debut at the American Music Awards on Sunday November 18th with the first public debut set for the Los Angeles Auto Show beginning later this month. Considering the nature of the formal debut at the American Music Awards, it will be interesting to see if Fiat offers any detailed information or if they will keep the good stuff for the LA Auto Show.

Tesla's Record Month in China: Doubled Registrations in March 2021
Does a Tesla on Autopilot Follow The Speed Limit?
END_OF_DOCUMENT_TOKEN_TO_BE_REPLACED