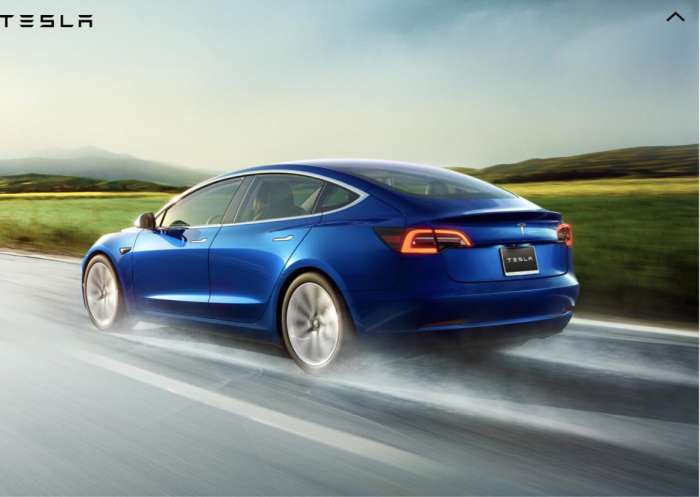 Wall Street’s UBS Says Model 3 Great Car but $35,000 Base Version Will be a Money Loser

UBS takes a look at Tesla Model 3 to make a tear down assessment of its latest product to find lots of things to be impressed about the car except for the profit margin of the proposed $35,000 Single Battery Pack/Motor RWD Base Model 3 Sedan.
Advertisement

Wall Street investment bank analysts did a careful tear down of the Model 3 to be impressed by many of its features and design. But by their calculations, if Tesla goes through with their plans to sell the car in the cheapest variant, they’ll lose several thousand dollars off the profit margin of the car:

The investment banking house of UBS’ financial fact finding arm, the Evidence Lab, did a little snooping around a Tesla Model 3 unit they had, to see how the car ticked under the battery pack (since there’s no hood), by breaking it down. The engineers assigned to the task used as comparison a BMW i3 and a Chevrolet Bolt, for a base line. They were quite pleased overall. With the results presented in a report the UBS engineers gave a glowing review to the technology inside the Tesla product, describing it as “years ahead of its peers,” with the UBS engineering team ”crazy about the powertrain, highlighting next gen, military grade tech,” that’s “years ahead of peers.”

“All in, Tesla delivered the best powertrain at the lowest cost,” Lead UBS Analyst Colin Lagan said in a company presentation. “Model 3 appears to have been built with a goal of simplifying the engineering, removing components, and building things as modularly as possible. The inverter was embedded into the e-motor and gearbox. More impressively, the battery management and charging electronics merged the AC/DC converter, on board charger, and power distribution module into one simple unit.”

"Through the teardown of the battery and drivetrain, we saw numerous advancements and innovations within the Model 3," the firm said.
"The technology in the battery pack appears to be ahead of all current production EVs and the BMS operates within tolerances not seen in others. The focus on modularity and compact design also suggests potential for automated production…. More importantly, the overall performance is superior with much better power, torque, and acceleration."

According to the UBS Evidence Lab, compared to the BMW i3 with MSRP USD $44.450, and the Chevy Volt with MSRP USD $36,000, both with no incentives, the decisive winner was the Tesla Model 3 in the present most inexpensive variant, which is the current one on the website in RWD at USD $49,000.

Concern: Base 3 No Money Maker

What had the research team most concerned, however, was the proposed $35,000 Single Battery Pack and RWD Motor variant that Tesla is looking to sell as soon as January, according to CEO Elon Musk’s tweet several days ago. Although it would be an addition to their luxury car model range, the car started with the premise of being Tesla’s first mass produced affordable car with tax credit or incentives for the working class and those who can barely afford a car, let alone an electric. Although the federal incentives are diminishing, Musk has not given up hope that this car and its upcoming CUV variant Model Y will have an affordable version sometime ready for production.

But the problem is that Tesla needs the Model 3 to solve its severe cash burn at about $4 billion USD per year with the many production mistakes they made with the car the past year, that may possibly find themselves in bankruptcy. Instead of selling the cheapest car first which apparently was the idea or plan, because of the debt crisis they now need to sell their most expensive variants first, and as many as they can through the second quarter 2019. On March 3, 2019 Tesla has debt interest payment due at nearly $1 billion USD. Tesla’s total debt is about $11 billion USD, a big chunk of that in junk bonds. And this is all a backdrop to apparent problems in Mr. Musk’s personal life capped with a bombshell tweet a few weeks ago about the company going private in a leveraged $24 billion USD buyout without telling Tesla’s board, and an inflammatory emotional interview a few days earlier with the New York Times, both events jolting the markets, and sending Tesla stock into a nearly 9% 30 point nosedive currently at $305 USD/share, the lowest in two years.

Since this report was presented to UBS investors a few days before this writing there have been several developments to both the car and the company which could be the basis to change the UBS evaluation. Several days prior to this UBS news, Tesla announced that the had developed new battery technology that makes a battery cell and thus a pack smaller, lighter, and more efficient. The lighter weight means longer charger ranges and more importantly, a lower price. Mr. Musk was looking to put these new packs into their cars as soon as the first quarter of the new year. And if Musk’s assessment is close to accurate, this would make the possibility of assembling the Cheap 3 even more likely.

Also, there has been several Model 3 tear downs in the past few months, none have been as stoical in assessment in the success of the base car. The July Munro and Associates tear down yielded a prediction of 30% profitability. The May tear down by a group working for the German car industry assessed Tesla profit margin beginning at an assessed price starting at $28,000 USD for a variant at the break even point for a production output at 10,000 vehicles. Our friends over at Electrek had this to say about UBS Analyst Colin Lagan: “Colin Langan is one of the highest-ranking analysts on TipRanks: #580 out of 4,847 analysts with a success rate of 61% of and an average return of 11.2%. That said, he has historically made poor recommendations on Tesla’s stock.”

So some are already saying that the data that UBS is using to make their assessments about the Model 3 are already outdated, and the prudent course is to wait until Tesla is ready to actually produce a low cost variant with the materials gathered and costs assessed then. Also, it is expected that Tesla at the least would be making less profit per unit on a base Model. That is one of the reasons Tesla needs to increase output to 10,000 vehicles per week, to mitigate any profit loss on a base model. And waiting to assess an actual cost per unit of the newly announced battery pack, which is one of the major costs of the vehicle itself, will then give Tesla a bigger picture of where their true production costs are to sell a base model.

Stay tuned to Torque News’ continuing coverage of the unfolding drama of the Tesla Corporation. To get a comprehensive report from the beginning of Tweet-gate and the buyout, click here . For coverage on the New York Times interview and the 30 point stock nosedive, click here.

Let us know how you feel about all of this down below!

LG's New EV Battery Plant Is a Welcome News for Tesla
Tesla Giga Berlin's New Hurdle: It's Not Only the Gov't, but Now Tesla Itself
END_OF_DOCUMENT_TOKEN_TO_BE_REPLACED