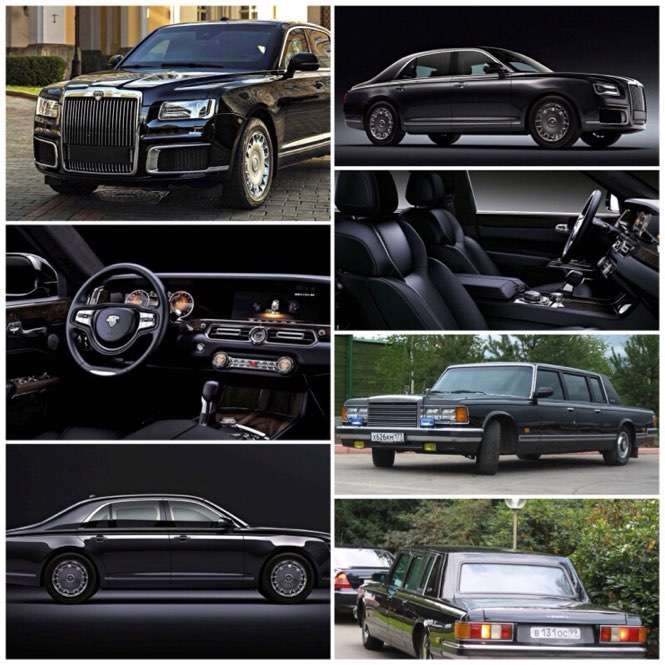 After abandoning plans for Zil, the storied Russo-Soviet official state car builder that was supposed to make Vladimir Putin’s next set of wheels back in 2012, the Russian Federation tapped and funded a government entity to develop a LWB car. Here’s the thing: instead of relying on unreliable Russo-Soviet engineering, they German engineered and are now ready to market this SWB car with Europe in mind. Both cars have Porsche developed engines. I get it now. A Zil this is not. Not bad at all.
Advertisement

There’s a difference between making an armored limousine for Russo-Soviet politicians and then marketing the car for the high end European bespoke luxury car buyer looking to own an “exotic,” and say, making an armored limousine for regional governors, members of the Duma, or back in the day, for the high ranking members of the Central Party Committee of the Supreme Soviet (I always loved how that rolled off my tongue). For years, the Soviets then the Russians tried it the latter way, with only the Soviet world taking to the iconic Zil limousine that few of us westerners ever saw. With economic sanctions on their tail, and little chance of His Excellency the President of the Russian Federation getting a new ballistic Mercedes or Maybach Pullman Guard to replace his present one, the Russian Plutocracy decided to make their own and see if they can market it outside the land of the old guard.

I shall never forget the day I was introduced to the world of Soviet and Eastern Bloc automotive. It was in the Red October of 1986, a 21 year old I was, when President Reagan went to Reykjavik for the Iceland Summit with Soviet Party Chairman Mikhail Gorbachev or “Gorby.” The Cold War was coming to an edge, Frankie Goes to Hollywood had a hit single “When Two Tribes Go to War,” the world held its breath, even the pope prayed for peace in a Mass before the summit, as the world stood still for just a few moments to see what would become of world peace. President Reagan’s 1983 Cadillac Fleetwood Special US Presidential State Car (now in the Reagan Library) with its high roof and obvious ultra thick ballistic glass pulled up proudly to the former French Consulate. He got out, went in, took off his coat, came out, and waited, as this ultra long, ultra flat, ultra sleek black limousine not ever seen before by the West, pulled up, and with his hat and coat on, Gorby gets out of a car that would’ve wowed them on the red carpet on Sunset Boulevard, smiles at the president, takes his hat off, shakes his hand, and the world becomes distracted by Gorby’s car. “What the hell is that? Cool!” I asked and proclaimed about the car. So did my friends. Peter Jennings, now rest his soul, had a lot of explaining to do about the car I was amazed he knew.

Zil was a Soviet armored truck maker, and since Stalin was the only crime spree Russia has ever known outside the Nazi’s in the 20th century, there was never really a need for anyone in the Bolshevik world to own an armored car back in the day, unless you pissed Stalin off somehow. So the progression made sense that Zil would do it, that they did up to 2002. Their last chance of doing it, which meant their last chance of survival, came back in 2012 when designs or the next state car were unveiled. But nothing ever came of it. When President Putin was seen riding in his new state car to his inauguration a few months ago, not in a new Zil, but in an entirely new brand, it became obvious to all us Soviet auto aficionados what exactly happened. In the Russo-Soviet world silence is both devastating and deadly.

It is symbolic that as the 2018 Moscow Motor Salon that unveiled the new short wheel based version of this new car was being presented, the old historic Zil factory where the old armored cars were made, 50 pieces per year, was painfully being razed. Now 100 years later since these now defunct Soviet born companies that made limos for Communist Party leaders, their successors are now trying a different approach: build those same kind of cars for the same privileged now wealthy Russian government plutocracy, but make the cars more marketable for the West in the hopes of making the money back from the development. Call it Supreme Soviet Capitalism?

Lessons from the Chinese About Rolls Royce

Whatever it is, damn, they did a pretty good job of putting the car together, at least from the photos, and from what I saw in the videos of Putin riding in his state car. You can tell they listened to the Germans who helped them about how to build a successfully executed well thought well planned high performance luxury saloon. By taking styling cues both inside and out from all the bespoke brands and combining them, not only you avoid copy cat syndrome, but you create a car that has a better chance of surviving in the market it was created for. Keep in mind the original Lexus LS400 and Hyundai’s G90 (Equus). They were accused of the same thing. See where they are now.

Unlike what the Chinese did a few years ago and after the Rolls Royce Phantom 7 was well into production by making a look-a-like with the original versions of the Hongqi L5 Saloon during pre-production when they introduced a prototype at a Chinese auto show, the Russians are trying a different approach. In the Chinese case, BMW threatened patent and trademark infringement suits in both international and Chinese courts if Hongqi ever marketed the car. They didn’t, instead what they did was actually went retro to tastefully take styling cues from older Hongqi models through the decades to create a legacy heritage brand. Clever twist. Unfortunately creativity is suppressed in China, and I think this is where the Americans realized the Chinese needed help with design and GM set up a design studio there. Incidentally to show you how quickly the Chinese have come, that’s where the design of the next batch of American electric cars most likely will be coming from, Buicks, Caddys, and Chevys, at GM Design Shanghai.

About the Car Exterior

Keeping in mind the Chinese copying just one brand, what the Russians did here was tastefully take styling cues from all the top shelf bespoke brands and incorporated them into their style. If I was a totally secure auto maker designer at an Auto show looking over at the Aurus display knowing some of my cues were used on this car, I’d go over to offer my name and hand, I’d tip my hat to Aurus, wish them well with the car, get them talking about it as they’ve got reason to be proud of it, and tell them I’ll see them at the next Auto Show to offer a coffee and bagel and leave it at that. You see, if copy cat were the case, it was done so many ways if so, that there’s not one automaker that can be pissed off about the style. In this case more than ever, imitation is the sincerest form of flattery and the Aurus Senat is full of it.

I see tasteful conservative British styling of Mulsanne and Spur in the back and roofline, Phantom in the overall fascia, the grille around the headlights, which also reminds me of another German based award winning American designed car hardly touched this last decade and still in production, the legendary and storied Chrysler 300, as if the Senat is tipping its hat to its American full sized colleague as well. We live in a world with too many people to hate one another. We need to start finding things in common to start loving one another. Obviously I wouldn’t use this car as a start. But you know, man, we have to start somewhere, don’t we?

You all know me about GM and plasticky interiors. I wish I could grab a GM interior designer to point to these pictures to tell them this is what the inside of a Cadillac should be looking like. Enough said.

Controversy Over Production and Budget

To develop a car like this in any part of the world to those who can afford it in those parts of the world, without marketing, costs around $1 billion USD. Instead of spending way less money to have a company like Mercedes, or Bentley, or Rolls Royce, all capable of making a Ballistic Level B7 bullet proof armored car also like GM’s Special Vehicles Unit can (Cadillac One), the Kremlin went on their own, mostly because of the sanctions imposed by the West for their invasion of Crimea and Ukraine. So their solution to defer the costs is to market the car where they can. With the sanctions I don’t see how they can do it in the European Union countries with an already tiny 2% demographic the car was made for.

With the money spent for this car, critics say, the Kremlin could have employed an assembly line to permanently make less expensive cars to sell those to defer the costs of this one. This is similar to what Bentley did with the Flying Spur development right after the VW purchase. VW made a mass produced VW branded mule car for Bentley to defer costs of building a limited production bespoke car. VW marketed the car and while it wasn’t a hit in North America it sold fairly well in Europe. That mule was the Volkswagen Phaeton. The spur turned out to be one of Bentley’s most popular models. Both probably saved a lot of jobs too.

So like Kalashnakov’s electric car they’re trying to market toward the West, I too see this car unfortunately becoming familiar to the third word, in this case, the official third world dictator car like the old Mercedes 600 Pullman was decades ago. But you never know.

My advice to Aurus is regardless who buys it, to make this car like it’s the best one in the world. It already has the potential. It’s German engineered. But unlike Soviet engineering make it reliable, make it rare, and make it special. Just be careful calling yourselves or allow yourselves to be called, “the Rolls Royce of” anything. You are doomed to comparisons and then to failure if you do. The only ones who can get away with that is Bentley, and only because they were once a Rolls!

Western car collectors at a mere $160K will want an example, from the East, the oil sheiks being another group. Regardless of world diplomacy, they’ll always be a demand for it when the market gates flood open should that day ever come. My hopes are with peace resolved and sanctions lifted this car will sell.

Here’s a Little Bit of Zil:

End Glossary of Russia Auto History Behind and Around Aurus

What do you think of Aurus, the Cortege Line, and the Senat car? Let us know below!