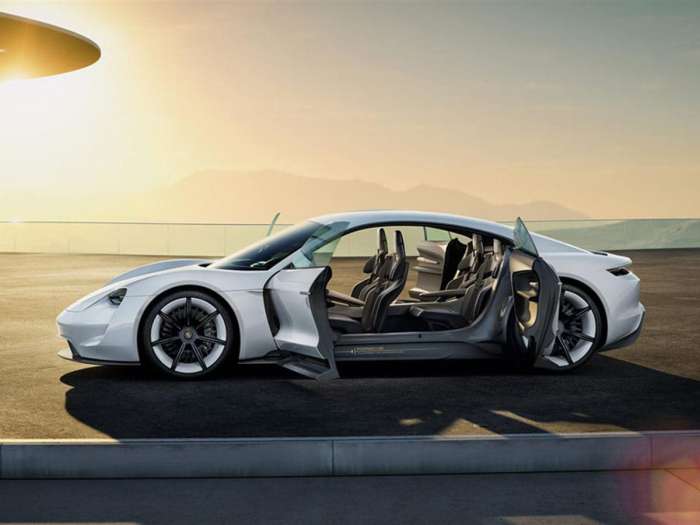 EV customers and fans are holding their breaths almost as if EV fatigue is overwhelming us, while Autocar is reporting that Porsche AG is receiving interest from customers about the new production coded BEV Mission-E, now named the 2020 all electric Porsche Taycan utility sports saloon, that will compete with the Tesla flagship sports saloon, the Model S. But of course we’re all looking over our shoulder at, shall I write it? The debacle surrounding the Model 3.
Advertisement

Porsche customers appear to be lining up to get ready to stake their claim to a new 2020 Porsche Taycan BEV on sale probably a year from now as a 2020 model. Porsche will obviously will try to avoid the mistakes of Tesla, and that includes the problems of waitlisting. Here are some of the advantages of Porsche Taycan vs Tesla Model S.

You can tell some people are beginning to suffer from EV fatigue when you tell them about how Porsche is getting ready to market and take orders for their new all BEV Taycan sports sedan, the eyes rolling and teeth sucking, and acerbic remarks begin to flow. Whatever it is that Tesla is going through with their present model range, Porsche and in fact VW would be smart for themselves to avoid any of that. But with the price point and features of this car, and how it came to be developed and eventually be marketed, it’s a no brainer that most likely that won’t happen.

Why So Long to Market: It’s About the Batteries

We do know this: Porsche took their sweet time developing this car and with damn good reason. Everyone was looking carefully at what Tesla was doing across the pond. I’ve recently dedicated myself lately to research car battery thermal cooling management to soon address this issue in an upcoming article about the problems Nissan is having with the Leaf, to only begin to imagine what Porsche had to develop to avoid that problem from occurring in their cars. Let me briefly explain because I didn’t know this that many of you I’m sure don’t either.

I get it now. I do. I was one of the many yelling what the hell is taking so long, 10 years damn it! I’m doing this research to see why. One of the reasons why car makers had such a difficult time developing battery technology the last 10 years, and why they were so apprehensive about producing them, and many still are, is because of the stress batteries are subjected to under ideal conditions to operate a motor vehicle with our present habits, the way we presently drive. Think about your cell phone. There are two times when our cell phones get very hot: when we talk on them for a prolonged period, and when we’re charging them.

The same case is with cars.

The two hottest times an electric car battery gets extremely hot is when they’re driven on the highway on long distance trips, and during recharging, especially fastcharging. When we’re driving on the interstate on a long distance trip the car batteries get extremely hot, and when they run low and we want to get to our destination, they need not only to be recharged, but the most efficient way to do that is by fast charging. There’s also the fire risk aspect, so these car companies need to get it right without fail. It’s one thing to get rapt in the back in a Pinto, Crown Victoria, Jeep Cherokee, or roll over in an Explorer or Samurai. Folks, I once seen people get burnt to death in front of me and I don’t ever want anyone to see such a thing ever again.

Nissan Leaf and the Fail Safe Drip Crisis in UK

Although Nissan won’t admit this that eventually they have to, a Nissan Leaf was not made to drive on a highway for a long period of time, that car is a local commuter car meant to get you via through a downtown loop of combined driving to get you to work or school, and once there to cool down and preferably recharge there, and then take you back home later. But the car is experiencing growing pains by their customers, and with them adding range Nissan is intensifying the problem. The issue is that Nissan air cools the batteries instead of using liquid cooling or both, to keep the batteries cool. This is part of the reason for the UK Nissan Leaf drip charge battery crisis. Customers are stressing their Leafs on the highway that when they pull into fastcharging station the car is going into fail safe mode, drip charging slowly so the car can cool down, stranding the customers as they wait an eternity.

Mindful of this, and Porsche too, let’s look at the performance sports car end of the BEV world: Porsche took their time developing Taycan because they want their BEV to act in every way no differently than a gasoline car subjected to the same highway stresses of not only an American interstate, but the German autobahn itself. That was the reason we saw Taycan and/or her CUV sister on the racetrack at Nurburgring a few times more than most cars earlier this past spring.

So Porsche wants the Taycan to act like your present gas 911 or Panamera except instead of filling with gas, you plug in to charge. Cooling the car during the most intense hottest times should be a non-issue. And that’s why the car is available for sale around a year from now, and not now. They aren’t cutting corners to go through what Nissan and Tesla are going through with their electric cars. Besides, this will give them time to put up that 500 fast charging stations network nationwide supposedly to rival Tesla’s through next year. It’s about a luxury performance brand no doubt, but it’s also about a human learning curve: there but by the grace of God go I through Tesla, Nissan, and yeah still, the VW scandal. Nobody wants to go through all that again no matter who’s fault that was.

With this in mind while the Taycan is getting tooled for production, great expectations, hope, anticipation, and yes excitement builds, when a car like this is about to make its debut. And who can blame anyone? And with the above stats promising to meet or beat Tesla, especially that 600 horsepower and God knows what kind of torque, even I can’t wait (wink). And Business Insider says that Stefan Weckbach, Porsche’s EV head, is promising a AutoPilot kind of driver assist feature controlled with gestures, an instrumentation system that only doubles down on the traditional pilot’s old school way of measuring car operations and performance, instead of a flat panel screen tablet.

Electric Ferdinand is Watching from Beyond

Now remember, this company recently found out that their founder’s first car, the P1, which they also recently inadvertently found, was an all electric. Ferdinand was an electrical engineer, not a mechanical one. SO they gotta make this count, the eyes of the world are upon them, more so in many more ways than they could ever be on Elon and his company. The Taycan is the legacy car companies’ official response to the Tesla Model S, regardless if another legacy beats them to market. It’s all about Porsche. And Porsche is sending messages that it will do things its way and that’s it. I love it: I wonder if there’s a cop directing message traffic in the media relations room - the message the last few months is clear, it’s enough we have to go electric under these circumstances and we’ll do it our way, but God be willing, we will be the last car company on Earth if need be, to put steering wheels and pedals and dial instruments in our cars. Amen.

Autocar says Porsche is tight lipped on how many customers are inquiring, how many are on a list, if the list exists, and a specific date of sale. Let’s give them space. I’m still routing for Tesla. But I’ve always been on Porsche’s side too. I hope they ace this. I’ll keep you guys posted.

What’s your take on the Taycan roll-out? Let us know in the comments section below.

DeanMcManis wrote on July 19, 2018 - 12:39pm Permalink
I think that the Taycan is a beautiful and exciting design. It promises to be a dream car with all of the technology and performance that you could ask for. And it's a Porsche, bringing with the name decades of racing and engineering experience. My only question is if they will be able to keep the price reasonable. Knowing the high cost of German options, it will be a huge triumph if you can get a Taycan out the door for under $85K. For now though it is looking great!
David Colgrove wrote on October 28, 2018 - 7:10pm Permalink
I’m #27 on a deposit list at my local dealer so the wait has begun
Al Castro wrote on November 5, 2018 - 5:12am Permalink
David thanks for this. Please let us know here and email me with your progress. You might be our guinea pig if you wish for a future story on your Taycan experience. Safe journeys and good health and experience with the list and your upcoming new car.