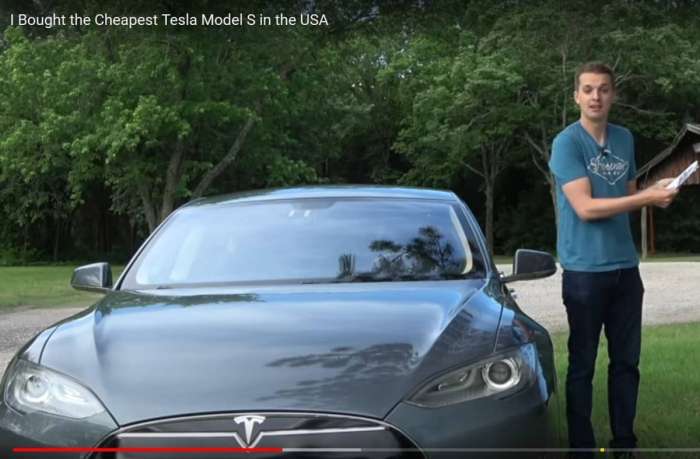 With the introduction of the new executive car, the Tesla Model 3, combined with the dynamic of the aging of the first generation of the current flagship sports saloon, the Tesla Model S, Tyler Hoover of YouTube’s Hoovie’s Garage capitalizes on this dynamic to find an excellent example of a 2012 Model S for a small fraction of the price of a Model 3. Deals are to be had!
Advertisement

Imagine driving away with a Tesla Model S in great shape for the fraction of the price of a Model 3! Tyler Hoover finds a 2012 Model S in Auto Trader with an offer he can’t refuse:

Although she will always be our Electric Queen of the Roads, the Tesla flagship Model S in its first generation is beginning to show her age even though she ages gracefully in her sixth year. But with the debut of her little sister the Model 3, and her newly crowned title as Queen of the Executive Car, best seller in the segment, that long waitlist leading up to her is enabling plenty of other options. Hoovie’s Garage’s Tyler Hoover found an example on Auto Trader in great shape for $33,500 and walked away with a great deal!

What’s in the car

Tyler was able to buy one of the first few thousand production models of the S when it debuted in 2012. The seller of the car is the father of the chief engineer at Tesla, so he was probably able to get VIP service for the car before he sold it, which included drive train, door handle ($1000/handle), touchscreen ($4,000), and other parts the car needed.

When new the car was equipped with the $3,750 Technology Package, the $1,500 Active Air Suspension Package, and the $20,000 85 kW motor option. Because of all this the car is equipped with supercharging for free, which is available on Most Model S’, for now, and was part of Tyler’s car. The car is in a beautiful steel gray exterior, and what looks like either a charcoal grey or black interior. When new the car was $85,000.

Why This Model S Is Inexpensive

Now there’s reasons why the car was so inexpensive: although it’s the optional 85 kW model it doesn’t have a dual motor and doesn’t come with “Ludicrous” mode. It does have a larger capacity battery over of the standard Model 3 battery 265 v. 220 miles of range.

And when you think about it as he shows you on the video, you really don’t need the dual motor, the single upgraded motor model has sufficient torque to accelerate, and Tyler shows you with his head snapping back at acceleration. For those unfamiliar with EVs or Tesla products torque is immediately available on demand with electric cars as opposed to gasoline where you have to increase rpm.

For a six year old battery, it’s operating at 90% capacity, which is where most of our cell phone batteries operate after using them over a period of time as they age. Like an automatic transmission on a gas car, the batteries in an EV are the most expensive replacement cost. So keep in mind that Tyler was lucky to find such a car at such a good price, as there are many good Model S’ out there, as there are also well worn ones as well.

We are entering a “sweet spot” if you will, of capitalizing on the debut of a second brand new model in a new company’s small lineup. While the waitlist is long and people who may already have a Model S but are on the waitlist for a Model 3, they are looking to trade in or sell their Model S and are looking for a deal.

That means they are willing to part ways for a price you’re reasonably willing to pay, MORE THAN for a price they’re reasonably willing to offer you. I word that carefully. This is more of a buyer’s market, but this is a Tesla we’re dealing with. Don’t be stingy as a buyer, as there are plenty of other buyers behind you willing to pay a little more to get what they want. Tyler was aware of that with his $1000 offer; keep that in mind during your negotiation. It was a wise move I think, for Tyler to offer the additional $1,000 to seal a deal. Besides the fact he wouldn’t have had a great story to tell on YouTube, someone behind him definitely would have offered a better deal.

What do you think about buying an older Model S instead of a new Model 3? Did Tyler score a great deal? Do you have an experience to share? Let us know in the comments section below!

kent beuchert wrote on July 7, 2018 - 8:44am Permalink
Better not get a fender bender - the repair costs will bankrupt you.And those $1000 door handles always break in a few years. Maintenance costs are ridiculous for an electric car. You have mostly bought a vehice that cannot travel as far as a Chevy Bolt nor is anywhere near as practical.