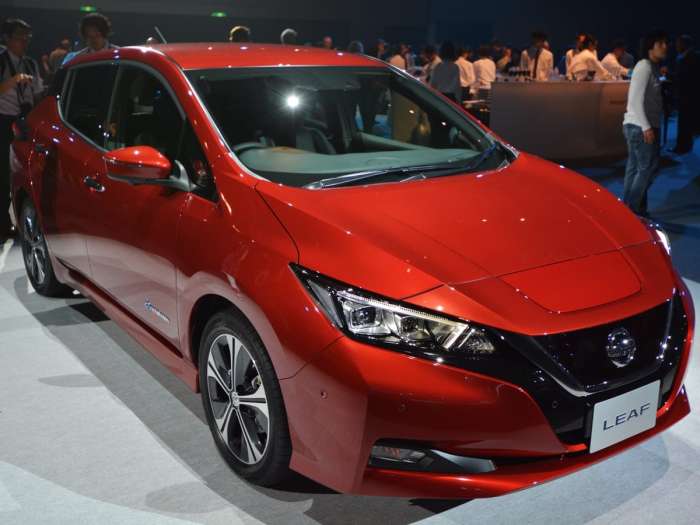 Changes are Coming Around the Corner for Nissan Leaf

The Nissan Leaf made changes to its second generation model this year, as they’re obviously trying to expand its market for more customers, particularly younger ones with the electric vehicle/clean energy dynamic. By making the Leaf less ugly and producing different variants for specific purposes, not only makes it more competitive against others like Bolt and Model 3, but it may also create a larger customer base, especially a younger one.
Advertisement

There is a new long range variant and possibly a performance one that are coming to the Nissan Leaf starting at the end of the year.

It didn’t have the hype or the fanfare or a waitlist of another now famous electric car, but when it arrived in 2010, the Nissan Leaf staked its claim and stays with an impression. Since 2010 Nissan sold 300,000 Leafs globally, half of them here in the states, and maybe half of that half of those customers Nissan frustrates in the process, because they didn’t listen to them with the first generation that it seems, they may be finally listening now. One of the first complaints people had about the first car right off the top, was that it was ugly, why did Nissan have to make the car that way?

Obviously because the car when introduced was unique, a trailblazer (not in a Chevy sense), and different, Nissan tried to style something to stand out and boy did they. Nissan also got carried away in trying to keep Leaf within their new corporate design architecture, which is in itself, well, you either can love it or leave it, but they toned it down for the BEV’s next generation model, the present one. It finally looks like a Nissan, and ah, a hatchback. I think. I certainly wouldn’t be embarrassed to drive it. Finally.

The next issue and this gets a lot of Leaf owners animated, was the battery range and all the controversies that came with it over the years. Leaf’s stated signature range from roll-out give or take was 100 miles and they kept it that way, maybe ticking it up a bit over the years. But the EPA first rated it at about 78 miles, and the tug of war is still going on over that to this day. With the new car, the controversy boiled over into Great Britain with their Leafs with the drip charge crisis.

After all Nissan went through, customers wanted to know why the hell did they bump the range to only 150 miles? Would it have made more sense and a substantial difference to put more battery in the tray to round off the range to say, 200 miles, and put the car within strike distance range of Bolt and lower tier Model 3? Because of this, there are customers who feel that Nissan didn’t really address any of the feedback that were issues with the last car, and went ahead put this new one into production anyway.

Well regardless of Nissan’s intentions, that may now change with these variants coming down the road. Nissan recently announced there are making a long range Leaf E-Plus to add to what apparently will become a Leaf line-up. With special side badging denoting its designation, E-Plus will have a larger battery to supply the 40 kW motor. A larger battery supply not only means longer range for up to 225 miles, it also gives the motor more power to draw from, so horsepower increases to 200, up from the 143 the base car has. And with more power, and this is my favorite part, comes more torque! But I’m afraid I don’t have power data from NIssan, sorry to tease you. I don’t expect to do any serious drifting in a Leaf anytime soon, but I do hope this means when you step on it, whatever “it” is because we can’t call it gas, the car will take to the interstate, not in a Mercedes or Tesla way, but for a respectable electric car with now a decent amount of horsepower for its size. This reminds me that this car will have the energy saving one-step braking.

Range and Power Comes Closer to Bolt and Base 3

“When you have a bigger battery, with more capacity, it just opens up the door to be able to have more output,” Nissan director of EV marketing Brian Maragno told Autoguide at a recent event. With that, E-Plus makes the Leaf a game changer to potential purchasers of Base Model 3 (the elusive 1 motor single battery pack $35,000 variant that who knows if Tesla will ever make), and more especially Bolt, since the two cars are closer to each other in the utility hatch segment than the little Tesla executive car. With all three with ranges in the same ball park it kinda levels the playing field as to strictly the spec sheet data in comparing the three cars for purchase. Range is a big ticket item, and a deal maker or deal breaker for some. I’m mindful of the comments section. So I worded this all carefully. Easy now.

It’s been almost 10 years now, and for many customers that 100-150 mile range was starting to look like a mile marker you passed on the highway long long ago. Battery technology is probably still not where we’d like it to be, but my goodness, a hell of a lot better than 10 years ago, so there’s really no excuse not to start piling on range to these electric cars. So I see what Nissan is trying to do here, by keeping their loyal present customer base happy in the Leaf they already have that they’re used to, and those who want more range can step up into the more muscular one as NIssan looks to expand the customer base of the new one.

Base Leaf continues to be a great commuter car, without all that ridiculous eventual when they get old money spending hybrid repair bill nonsense, with its 150 mile range, and with the Leaf E-Plus at 225 you can start thinking about going further away in what’s becoming a regular electric car. I’m assuming that 80% charge in 30 minutes for the base transfers to Plus.

Another issue Nissan Leaf customers feel still hasn’t been addressed is the car’s boring factor. I’m afraid the customers have them on this one too, and there’s no reason for this either, cmon Nissan! This is the same company that makes Maxima and GT-R, there’s no excuse for this too!. It would be nice if a sporty mini-electric Maxima-like variant of the car was made, and the NISMO version Nissan is contemplating, may fit the bill.

The car has a cool 2 color livery design with a third color trim accent that frankly looks expensive but worth it, Leaf NISMO looks like its standing stouter, wider, and more aggressive and muscular. The interior finally looks like one should in a proper car. Nissan has given few details about power plant enhancement, but the car is certainly aimed at a younger market to get them turned on not just to electric cars, but to cars, period.

An official Nissan press release states that the Leaf Nismo would have improved aerodynamics, a sport-tuned suspension and performance tires. Additionally, it would have a “custom-tuned computer that delivers instant acceleration at all speeds.” So in this case, that also means more torque!

Nissan has no word on dates, prices, or specific features for either variant, other than the ones I’ve just given you here. Furthermore, we do not know if Plus will come in the same three trim levels as Base does, S, SV, and SL. The Plus is surely going to production, probably by the end of this or by early next year. I’d say NISMO Leaf probably will go to production, maybe in a year or two. I hope, but Nissan is cryptic, which makes me believe they will.

Ok, Nissan Leaf owners, let’s hear the gospel from you! Tell me what’s on your mind about Leaf, E-Plus, and NISMO in the comments section below!