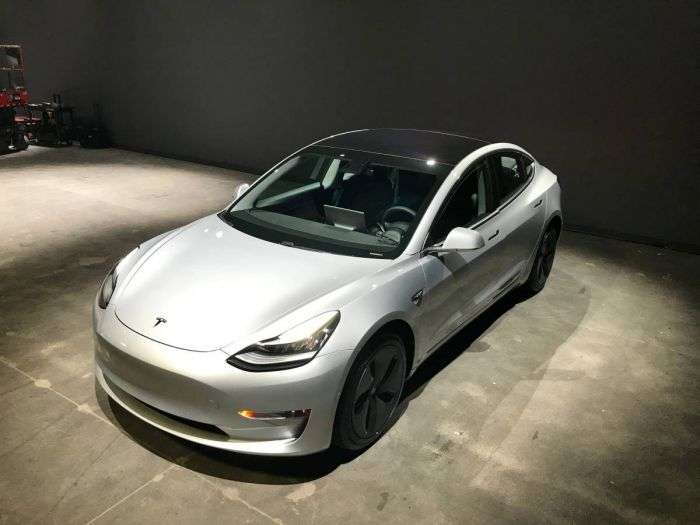 Consumer Reports has finally tested the Tesla Model 3. According to engineers at the magazine the Model 3 suffers on a number of fronts. Much of the report revisits the usual problems with Tesla cars. They again bring up construction quality issues with the car. The usual squeaks and rattles with the dash and gaps in the body panels. The main issue with the car that garnered a "not recommended", rating was it's braking performance.
Advertisement

After testing the Tesla Model 3 Consumer reports has decided it cannot recommend the car to consumers. When the Model S P85D first came on the scene Consumer Reports bestowed it's highest rating on the car. In fact the P85D scored the highest rating ever for an automobile in 2015 and it broke their rating system. The car scored 103 out of 100. Since then the publication has had a love hate relationship with Tesla.

There have been a number of ups and downs with Consumer Reports and it's ratings of Tesla automobiles. The Model S has had some issues that have caused the car to be down graded by the magazine. In 2017 the magazine lowered the Model S score because Tesla did not activate the automatic braking system that was supposed to be standard equipment feature. Tesla promised to work through electrical problems but that left owners without the feature for a number of months. The automatic braking feature adds points to the cars rating. Because of this the Model S fell to third place behind the Lexus LS and the BMW 7 Series. Once Tesla updated the software it received the top score of 100 for it's performance characteristics. It's final score was an 87 due to reliability issues.

Consumer Reports finally got around to doing a full road test on the Model 3 for it's latest issue. The result was that the car could not be recommended. This was based mainly on it's braking performance. In the first test the 0-60 stopping result was 130 feet. That figure went up to 157 feet on subsequent tests. A Car and Driver magazine test resulted in a stop from 70 mph that took 196 feet. Elon Musk is working on the issue and a software problem involving an ABS calibration algorithm. Musk has assured owners the problem will be fixed and the vehicle will have amazing breaking ability, something every owner should have without question.

Other issues with the car are uncomfortable back seats, too much wind noise at highway speed and a ride that is too harsh. The engineers were not fans of the 3's display and control screen. The center screen requires you to take your eyes off the road too often to make routine adjustments. Adjusting the mirrors and changing airflow for the heating and cooling requires multiple steps using the screens controls. Will any of this matter to buyers? With Tesla's fan base I tend to think not.

The knock against Consumer Reports.

If you spend any time on social media you will see a range of opinions regarding the publications results. They have an incredible database of testing information assembled over many many years. Car owners who get the survey answer questions based on the first 12 months of ownership.

Any problems experienced are rated for severity based on cost, failure, safety and time lost without the vehicle. Many people myself included, are of the opinion that the publication favors European automobiles and Toyota and Lexus specifically. Now Toyota and Lexus are certainly fine automobiles but their reporting methods are inconsistent. One minute a model is the belle of the ball and the next it is the red headed stepchild.

The Chevrolet Volt is an example of this.

The first generation got high marks. Second only to the Tesla Model S actually. The second generation doesn't even make the cut. Look at many Facebook pages devoted the Volt and you will find a vast majority of owners satisfied generation 2 Volts. Granted these owners love their cars and there may be a bias but the information I have gained is honest and helpful. Owners on the Face Book pages I frequent on the internet report problems with their cars They report what they are and how they got fixed. This information is very helpful and by all accounts owners are very satisfied with their Volts.

In 2015 Consumer Reports shocked everyone by picking the Chevrolet Impala as the best large car earning a score of 91. In 2017 the Chevrolet Cruz was chosen as the best small car by Consumer Reports. The Cruz is a fine car but in comparison tests other publications have awarded the Honda Civic the top spot. The Tesla suffers from issues with quality that would not fly with buyers of a BMW, Mercedes or any manufacturer for that matter. Tesla owners are a different breed. They love their cars and will accept some of the compromises the car has.

Owners know that Tesla goes all out to fix issues when they come up. When all the bugs are worked out of the Model 3 I am sure that Consumer Reports will change its feelings on the car. With all the competition coming in the next 6-8 months from other manufacturers, Elon needs to move fast because time is running out and his money will be next.

kent beuchert wrote on May 24, 2018 - 5:58pm Permalink
Consumer Reports accurately fingered the center user control touchscreen as the major safety blunder - think of it as text driving gone wild. These technologically out-of-place PC screens will have to be recalled. Edmunds has produces a more negative report of a long term Model 3 test - the car is literally falling apart.. It's horrifying that Tesla is so clueless about so many defects in their vehicles. Nowthey are apparently blaming oil companies (!!!!) for thir deserved bad publicity. Musk is now certifiably insane.