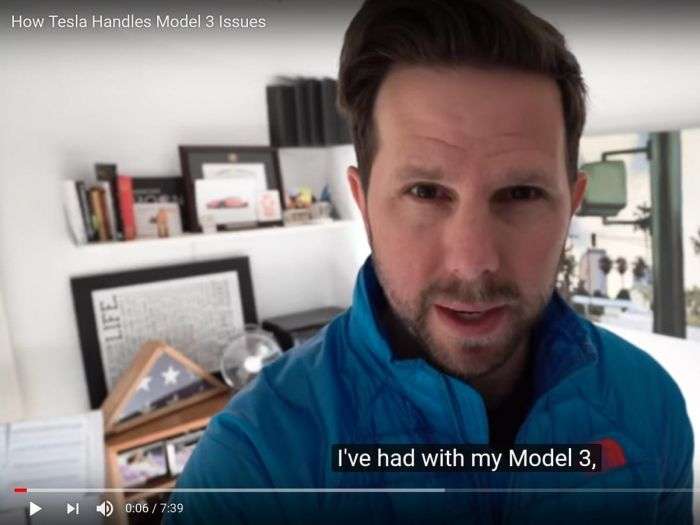 Important Issues About Model 3 and How Tesla Handles Them

Ben Sullins from Teslanomics had to deal with 3 issues about his Tesla Model 3. First, it was the Model 3's screen phantom touche. Tesla replaced the screen. Second, was the clicking near the phone charger. Tesla replaced the console. Third, was the replacement of the steering gear. Tesla was proactive in fixing this and called him multiple times to fix this. He's happy with how Tesla has handled things but not happy with the issues.
Advertisement

The Model 3, which went into production only several months ago is “designed to attain the highest safety ratings in every category, Model 3 achieves 220 miles of range while starting at only $35,000 before incentives," according to Tesla. Model 3 is smaller than Tesla's flagship Model S, simpler, more affordable electric car. Production of the Model 3 began in 2017, and some custom deliveries were made. Now, one can order a Model 3, and according to the Tesla website, can receive it by late 2018. It features seating for 5 adults, it takes 5.1 to 5.6 seconds to reach 60 miles per hour from zero, has a range of 220 to 310 miles, and one digital display.

As it is with most of the new cars, issues come up with Model 3 as more owners report them on Youtube or on Facebook. Tesla is clearly paying close attention to the feedback they are getting on Model 3. In fact, today I read about a Tesla owner who went with two friends on separate occasions to their Model 3 delivery. The DS repeatedly asked them to let them know what they thought about the car.

Customers’ Issues With the Model 3 and How Tesla Responded

However, as with many new vehicles, the new model does not come without its problems. YouTuber Ben Sullins has spoken on his channel about problems he has faced with his Model 3 and Tesla’s response to his complaints.

There were 3 main issues that he had to deal with in his car. The first one was screen phantom touches in the digital display. When he complained to Tesla, the company replaced the screen. He also heard some clicking noises on the flap of the phone charging port. Tesla responded by replacing the whole unit altogether. Finally, there were issues with the steering gear of the vehicle, and Tesla had called him several times promptly in order to fix this issue.

Sullins states that, unlike other car companies which have terrible customer service, Tesla is completely different, and any issue he has had with any Tesla vehicle was resolved within a matter of days. If there are issues with software, for example, the car owner does not necessarily even need to go to the shop and have it serviced; the technician will come out to wherever the owner is, which ultimately saves money.

Tesla has reported that “customer satisfaction scores for Model 3 “quality and condition” after delivery are at an all-time high of 94%. These are the best customer scores we’ve received for quality and condition ever, across all of our vehicles. Customers provide this feedback a minimum of five days after they take delivery, giving them time to thoroughly scrutinize their car and get the opinion of friends and family.”

Have you had any issues with your Model 3? If so, are you satisfied how Tesla handled them? What are your thoughts on the car company, their customer service, and their vehicles? Please let us know in the comments section below for discussion.

1stglend wrote on February 22, 2018 - 9:28am Permalink
I can’t compare Model 3's handling with Model S or X, but Tesla has been insanely responsive to me. I have received daily emails with reviews of video and pulled logs from Tesla. Solid feedback and tracking, and about 60% resolution already.
Highdet wrote on February 22, 2018 - 9:30am Permalink
Some people say Tesla is being proactive, but this isn't good for as these Model 3s are just the first few thousand vehicles off the line. However, the same observation could be argued in the opposite direction: It's better that this is the first few thousand vehicles since it allows them to work out kinks early on, impacting fewer cars and saving them problems later. Of course, we have no way of knowing how good or bad it is since we don't have the required insider information as to what causes all of their issues. It could be a persistent problem with company culture or it could just be the result of a young company setting up a new line.
kent beuchert wrote on February 22, 2018 - 10:18am Permalink
Wait till the warranty runs out and the owner is faced with fragile parts that cost a fortune (and only Tesla can fix) - check out reports of collision damage - which can only be repaired at "Tesla certified shops" aparently the only ones Tesla will ship parts to : $10,000 for a 3 MPH slight fender bender. Insurance company refused to pay that price. These are just two of the reasons I would never buy anything Tesla sells - that is one greedy company that produces ridiculously complicated EVs, which should always be simpler, easier to repair.
Walt conlogue wrote on April 16, 2019 - 4:52pm Permalink
My three week old Tesla model three constantly drift right to left .Took it back to Raleigh North Carolina Tesla realigned it but it still does the same thing