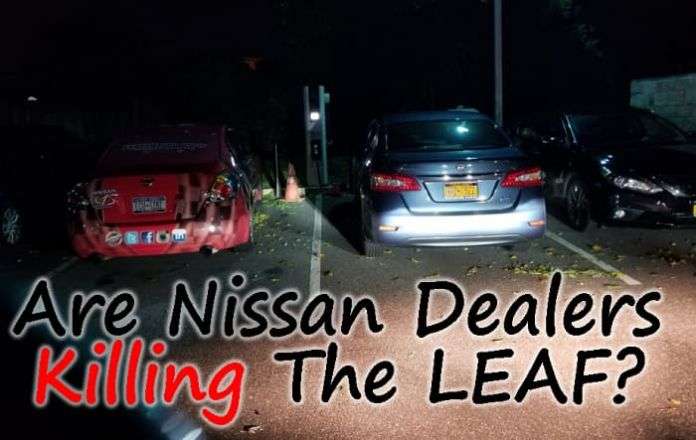 Are Nissan Dealers Killing the LEAF?

Most Nissan LEAF owners are satisfied with the vehicle, and many are excited to share their positive experiences online, but not everybody is pleased with their local dealers.
Advertisement

Being able to charge your Nissan LEAF can make the difference between getting there or getting a tow, and owners report that Nissan dealers are blocking access to chargers, and otherwise not supporting LEAF owners.

Nissan dealers host level 2 and level 3 charging stations all over the country, and some owners, like this one on Twitter, are concerned about making it to their destinations. Dealers often don't keep parking space open to access stations. In large metro areas, an electric vehicle owner can probably find another station, but in many areas, the Nissan dealer's station might be the only one in whatever range the driver has left.

@NissanUSA
It is important for EVs to have access to chargers at dealerships.
They saw me taking pix, so they came out and moved car.. Not enough..had they been closed , it would have been a problem.
Charging stations should be free and clear for charging 24X7 pic.twitter.com/DqiQwvv6JD

Sadly, this is far from an isolated case. A search of the Nissan LEAF Owners Group on Facebook reveals many complaints from its 7,000+ members. They often mention getting "ICEd", or being blocked by a gas vehicle parked in the way of charging. A non-scientific poll of enthusiasts in this group shows that the vast majority have faced this issue at dealers. Some even went out of their way to indicate that the dealers themselves are blocking the stations with gas vehicles for sale, or simply not allowing anybody to use the chargers at all.

No matter how well Nissan Corporate builds the LEAF, few drivers would recommend a vehicle they got stranded in (or almost got stranded in) to friends and family.

Other searches of the LEAF Owners Group revealed other complaints about dealers. Many members say they don't trust their local dealer, can't purchase a LEAF locally, have trouble getting it serviced, or indicate a general feeling that their local Nissan dealer would rather not have to deal with the LEAF at all. Even worse, salesmen have been accused of pushing potential LEAF buyers to purchase a gas-powered vehicle rather than a LEAF they came to test drive. Members speculate that sales of EVs, which are more durable and require less maintenance, could cost dealers future sales and service dollars, so dealers are trying to harm LEAF sales.

While these other complaints are less widespread and aren't very easy to prove, Nissan Corporate would be wise to study these complaints further. Look at any media outlet that deals with the automotive world, and you'll see mentions of the "electric future". With all the glowing reviews of the latest models, with greater and greater range, one could easily forget that plugin vehicles are still only a small fraction of overall car sales.

Long-term success for plugins is still far from a sure bet. Without supportive dealers and a growing network of charging stations, prospects do not look as good as they should for Nissan Corporate's new 2018 LEAF. Please, share your thoughts and opinions in the comments section below for discussion. We would love to hear from you as well.

Jane Cook wrote on November 1, 2017 - 5:03pm Permalink
I absolutely agree. Nissan dealers that I've dealt with ( 3 so far) know nothing about the car or EVs in general, and do all the can to steer me away from the Leaf. They've succeeded- when my lease is up, I'll get a Tesla.
Jennifer Sensiba wrote on November 1, 2017 - 10:02pm Permalink
That's sad to hear.
Nick wrote on November 1, 2017 - 7:12pm Permalink
Our local Nissan dealer is very good. I've loved my 2015 Leaf for two years. But now I see my battery down to 88% SOH (fell from 95% over summer). Not loving that. Even with new "lizard" battery Leaf apparently still cannot survive heat. It's a great car to drive, but don't see how I can have any confidence in it or future Leafs until Nissan has better battery temperature management.
Jennifer Sensiba wrote on November 1, 2017 - 10:03pm Permalink
In what ways has your dealer done the job right? Other dealers could definitely learn from good examples.
Russ wrote on November 1, 2017 - 7:13pm Permalink
Yes and no. 1 dealer refilled my freon at 21k miles for free because my heater quit working without it. A diff dealer tried to charge me $425 for a new seat sensor at 26k miles, but eventually just charged me $125 diagnostic fee and replaced the seat sensor "free". So I am a fan of 1 dealer but i feel the other one shafted me. Either way neither problem should have occurred on a car with under 27k miles on it.
David wrote on November 1, 2017 - 7:41pm Permalink
For the most part my experience in my area has been generally satisfactory, the Dealership does their best to keep their charging stations available. I normally charge at home mostly because we just drive ours locally ,my wife uses it daily to commute to work which is only a few miles down the street so we have not really needed to use an outside charging network per say. The dealer I got mine from was quite knowledgeable on the whole EV subject, even informed of when the next Gen of Leafs would become available so I could upgrade eventually. We are hoping that one will become available to reach 200 to 250 range though, the 150 one coming out soon is not bad but when we can drive comfortably between our home and Charleston with out worring about range anxiety then we will be ok. Charleston is 120 miles from us and believe me it would help tremendously to be able to reach there with a Leaf it would totally revolutionize our way of life with out a need for gasoline. Any how we enjoy the one we have for now.
Colette wrote on November 1, 2017 - 8:29pm Permalink
Nissan Deansgrange in Dublin have been very helpful...no problems at all. Couldn't be happier
Jennifer Sensiba wrote on November 1, 2017 - 10:04pm Permalink
What do you think other dealers could do to get it right like your dealer did?
Robert wrote on November 1, 2017 - 11:10pm Permalink
I've encountered 2 local Nissan dealers ICEing their on site chargers. When I asked the cars be moved I was told they needed to find the keys. it's taken up to 45 minutes, after repeated requests to clear the chargers, before anyone actually moved any cars. Once, after waiting for more than 30 minutes for a car to be moved, I pulled a L-3 fast charger cable over the blocking car. Double parked, blocking the blocker, and plugged-in anyway. I got some dirty looks, but nobody had the guts to say anything to me.
Jennifer Sensiba wrote on November 2, 2017 - 10:21pm Permalink
Sometimes you just have to walk over the meanies :P
Mike wrote on November 27, 2017 - 10:01pm Permalink
My local dealer service department is so bad I refuse to buy another Nissan as long as they are the only dealer in town. I tried to get the main battery in my 2012 Leaf replaced. Took the car in for them to order battery. Waited 2+ months only to find out it was never ordered. Then they installed wrong battery. They refused to order the correct battery for over a month until Nissan agreed to pay for it. Did I mention they wrecked the car while they had it? Yep. Drove it under partially open garage door.
Suzanne wrote on January 29, 2018 - 12:11pm Permalink
I just called my Nissan dealership about a part they ordered for my Leaf in November. The part is still not available and they lost their only certified Leaf tech so even if they had the part they could not service it. Next closest dealer 46 miles away. The local dealer will only allow charging to customers who received service that day. They are definitely not catering to Leaf owners.
‘Vincent wrote on May 4, 2018 - 12:26am Permalink
WOW!!! That’s all. I can say after reading some of these comments. My local dealership must be one of the best in Nissan. I just bought a new leaf. Dealership has 3 charging stations. Although it has not happened yet the Service Manager said to let his people know if any cars were blocking the way and they would move them. Although they lock up the lot at closing, the section where the chargers are is open 24/7. I have never encountered a problem.
Dennis Martini wrote on September 8, 2019 - 12:24am Permalink
Tried to get a test drive of a new Leaf in Detroit area. Only 2 dealers authorized to sell. They had no new Leafs In stock and were not planning to order any. Then, they had a used, beat up and udesireable 2017 model on the lot for a test drive. Sales person said nothing good about the car and was not interested in selling any. Chargers were block with ICE pick up trucks. It was like selling a Yugo. Awful experience.