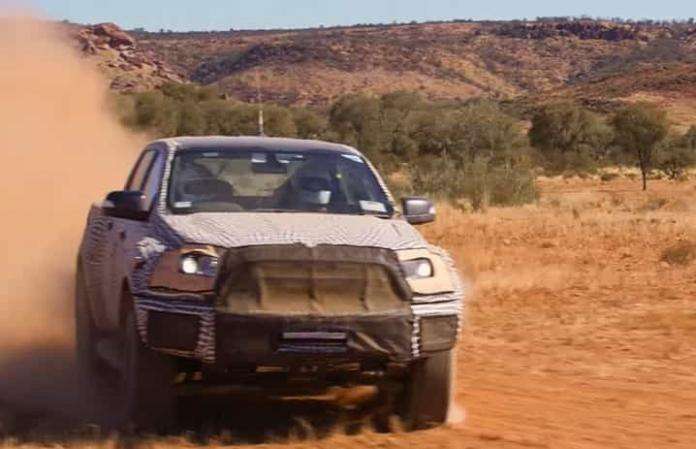 The Ford Ranger Raptor; How The Light Truck has Evolved

The Ford Ranger is slated to return to the US in 2019. This wasn’t a big deal, simply the rebirth of dead Ford truck and another addition to the light truck market. Until yesterday, when Ford blew our minds with a seriously awesome video of a Ranger blasting through the Australian outback dressed in some black and white automotive camo and a few bags. If you haven’t seen the video, stop everything and watch it now.
Advertisement

The video, posted by Ford South Africa, is the automotive version of something seriously hot and heavy. Although it’s purposely hard to make any details out about what the truck truly looks like it is does appear to be similar in size and shape to the Ranger currently sold overseas. It’s unclear if the US will see the same foreign market Ranger or if it will be overhauled specifically for the US market, there is a scheduled redesign of the Ranger taking place for the 2019 model year.

Many of the features and available options rumored lead us to believe the US version will be the same as the Rangers currently sold overseas by ford, including a diesel engine to compete with Chevy’s Colorado Duramax. Toyota has a TRD PRO Tacoma but most will agree that it’s only real differentiating features of the PRO are the PRO grille/emblems and the TRD tuned Bilstein suspension. Chevy however has the Colorado ZR2, a built off-road machine heavily equipped for many different terrains. If Ford is looking to stamp its mark in the light truck performance sector a Raptor Ranger could be the way to do it.

By the way in July 3, 2017 this Ford dealership Tweeted possible spy shots of the 2020 Ford Ranger Raptor. Then TorqueNews reporter Patrick Rall wrote that the Ranger Raptor, inspired by the F150 Raptor, is a great idea.

Here is what we know about the New Ford Ranger Raptor

It arrives in Australia in 2018, check the math, and that a year ahead of the US’s scheduled reintroduction. Hopefully this works out in our favor and gives Ford enough time to produce an American sized allotment of Raptor Rangers when they’re on US lots. And it honestly makes a lot of sense for Ford to offer a Raptor Ranger seeing as how popular the F150 based Raptor currently is and the sales figures it continues to produce.

There reportedly have been sightings of a very similarly clad Ranger testing on US streets, which up until now was only believed to be testing a mild off-road package option.

There are a multitude of engine options for the Ranger Raptor. It could see something as small as a 2.0-liter I4, but it is unlikely that it will see the same 3.5-liter EcoBoost currently in the F150 Raptor. However, Ford also makes a 2.7-liter EcoBoost V6, that has not been put in a performance vehicle, unlike the other two EcoBoost engines.

Past this, Ford has yet to comment on any details about the Ranger Raptor. It’s a solid bet Fox Racing Shox will be involved in the suspension design and tuning but frankly almost everything is speculation currently. We’ll keep a close eye out for details as they come and what to expect from the Raptor Ranger weather it arrives to the US or not. I’m holding out hope that this truck will make it to the US market within 2 years of the Ranger relaunch, Chevy is in the lead with OEM spec light truck performance, I don’t expect Ford to sit idly by when they have a truck that could take that lead away.

LG's New EV Battery Plant Is a Welcome News for Tesla
Tesla Giga Berlin's New Hurdle: It's Not Only the Gov't, but Now Tesla Itself
END_OF_DOCUMENT_TOKEN_TO_BE_REPLACED