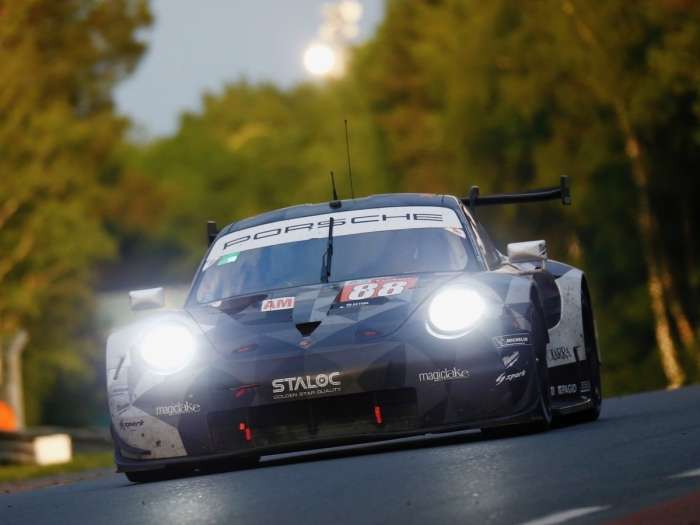 After Dominating at Historic Lemans, Porsche is Poised for Success

It's been 10 days since Porsche took the GTE class at Lemans with a 1-2 finish. With this substantial victory, Porsche is positioned as the points leader going into round 5 of the IMSA WeatherTech SportsCar Championship.
Advertisement

Round 5 will be taking place at Watkins Glen on July 1. Following a major 1-2 victory at the World Endurance Championship's 24 hour race at Le Mans, the team is hoping to keep their momentum to maintain their points lead in the IMSA Weathertech SportsCar Championship. In this series, Porsche has just one point separating the team from the second place manufacturer, Ford.

The lineup of drivers for the two Porsche cars seem confident in the remainder of the season. Among them, Laurens Vanthoor of the #911 (#92 in WEC) Porsche 911 RSR has strong hopes for the remaining 6 rounds, stating that he is "riding the wave" which comes from victories at Mid-Ohio and his pole-position qualifying in the Nurburgring 24. "This year, everything seems to be pretty sorted. We've had good pace for all the races so far."

Porsche's two teams field 911 RSR's, which are similar to the manufacturer racecars which the marque sells to racing customers. The cars are notable for their aggressive diffusers and large rear wings, which give the cars sufficient downforce to maintain grip. Depending on restrictions, the engine, a 4.0 liter flat six mounted midship (as opposed to in rear, as is traditional for 911s), produces 510bhp and produces the signature scream which accompanies Porsche racecars everywhere.

Dr Frank-Steffen Walliser, Vice President Motorsport and GT Cars emphasized that Porsche's team will not be resting on its laurels going into the second half of the 2018 season. "The next big challenge awaits us at the Watkins Glen race...We want to bring home a top result from Watkins Glen, not only to extend our lead in the IMSA SportsCar Championship, but also to defend our chances to bring home the North American Endurance Cup title."

Pascal Zurlinden, Director GT Factory Motorsport spoke of the challenges in preparing for the upcoming 6-hour race at Watkins Glen in New York. "One of the big challenges at this classic is to find a perfect vehicle setup for this demanding track." Every track has its unique set of challenges, and as Vanthoor pointed out, "when you have a motorsports career, you have highs and lows." Porsche's factory team seem to be on a high right now, but Ford follows closely behind, and there is a lot of racing left in the season.