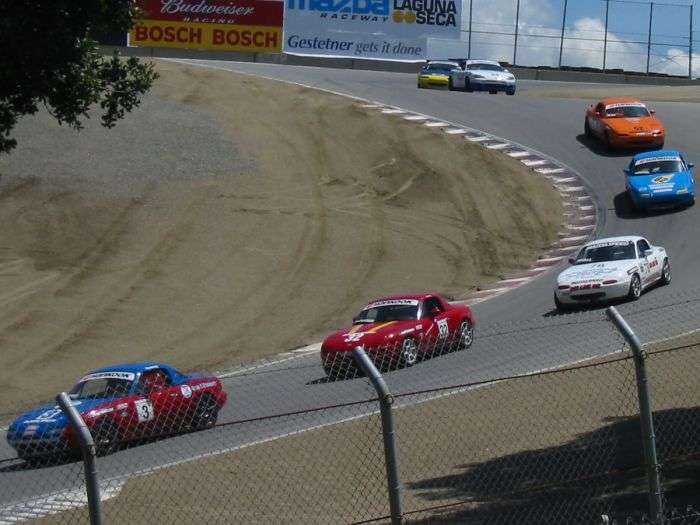 Mazda's typical buyer is not one obsessed with horsepower or cornering G's. The company's bread and butter comes from economical consumers, and to most, Mazda stands for simple, efficient commuters. It may come as some surprise then, to hear that more Mazdas are road-raced on any given weekend than any other manufacturer. Here are the three main reasons why Mazda has such a strong presence in the world of motorsports.
Advertisement

Part of what makes Mazda unique is the number of sporty cars the marque has provided throughout its history, and cars like the Mazdaspeed Miata are still competitive, maybe even better, than a new versions. It's a company which survives on economical cars for ordinary drivers, and yet Mazda seems to have a commitment to maintaining a lineup with at least a few sporty models. The RX-7, RX-8, and of course the Mazda Miata are the most obvious examples, but you will still drivers competing in humble Mazda 2's. The Protege, Mazda 3, and Mazda 6 all have Mazdaspeed variants, all with loyal followings.

Road racing is an expensive hobby. Spares, tires, transportation, entry fees, hotel, etc. Mazda takes some of the pain out of the process. Miatas are plentiful, have tons of aftermarket support, cheap parts, and the Miata community is incredible strong and supportive in Motorsports. Again, the Miata does not stand alone, the story is much the same for the other models which are found in plentiful numbers in all kinds of racing. These cars also make a great platform for racing--Mazda is often underestimated in handling, and the RX-7s and -8s are RWD, as is the Miata. Don't discount the FWD cars though, they are quite competitive.

Mazda, more than any other manufacturer in the consumer segment, provides and incredible level of support to amateur racers. For example, Mazda has a number of contingency programs, in which rewards are given to a variety of racers for representing Mazda Motorsports. Among them is an opportunity to win $30,000 in the Spec Miata series. I know what you're thinking: these awards must be for factory racers, right? Nope. All you have to do is participate in the contingency program. They even give awards to autocross drivers, which anyone with a Mazda can participate in. For more details, check out their contingency Website.

What are you waiting for?

Mazda's motorsports presence isn't going anywhere. They have a handful of strong professional teams, and seem to be committed to maintaining the sportier part of their brand, as shown by the even more powerful 2019 Mazda Miata. In addition, they offer inexpensive options for the new buyer, and the used market is far from starved for choice. Parts are cheap, and you can even have some of the expenses eased by contingency programs. What are you going to do to actualize your racing ambitions?