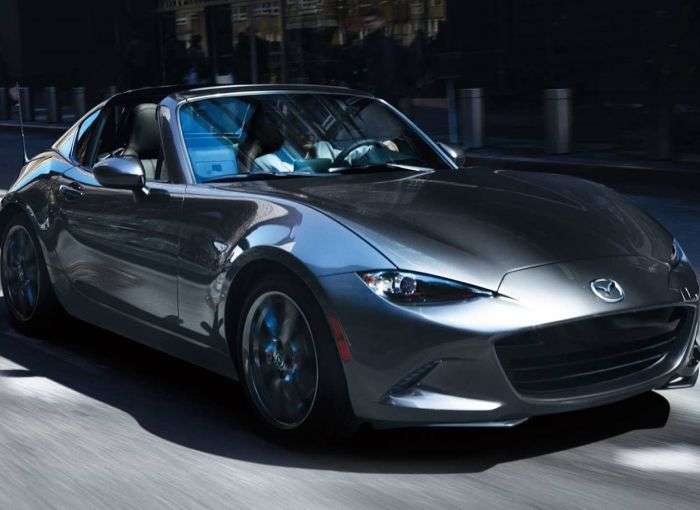 The current “ND” iteration of Mazda’s legendary Miata sports car will benefit from a few changes in the 2019 model year. Perhaps most notably, the 2019 Miata will have the most powerful engine ever put in the model, and will rip up to a new 7500rpm redline.
Advertisement

While the outgoing 2018 Miata had 155hp, around the same as the previous NC Miata, the 2019 Miata will have 181hp, a noticeable increase, and making it the most powerful Miata engine in the model’s 29-year run.

Although sales have dropped over the last year, Mazda may have an ace up its sleeve coming into the 2019 selling season. The 2019 Miata will have the most powerful engine in the little roadster's history. The new car gains a sizeable 26hp over the previous model year, making it more powerful than any engine installed in the previous three generations.

Changes to the Mazda Miata's Engine
The power increase and higher redline come as a result of multiple redesigns in the engine-- higher-tension valve springs, which are more reliable at higher engine RPM, lighter pistons and connecting rods, and a better-balanced crankshaft. In addition, the throttle body will be opened up more, the valves will be redesigned, and even the muffler will see small changes to work with the higher redesign.

Making a Good Car Better
The ND Miata has proven that it can be a hot seller in the past, and many see the car as a return to Mazda’s original engineering philosophy for the Miata--lightness and balance which have made the car legendary, and allow the driver to throw the little roadster around intuitively.

This is what drove sales of the first generation to over 400,000 units from 1989-1997, and the newest generation is a masterful new take on this formula. It’s lighter and smaller than the previous generation, and the new model’s popularity reflect these improvements.

The Power We've Been Wanting for the Miata
However, in a number of reviews of the outgoing model, a common critique was that the Miata’s 2.0 liter powerplant was a bit underpowered. Mazda’s response has typically focused on reducing weight, and so this additional horsepower comes as a surprise to those who expected reductions in curb weight. A 14 percent increase in horsepower is more than a small difference; if the power bump comes with a decrease in the car’s already feather-light chassis, the Miata will be an even more enticing drive--and seriously quick.

Which of these changes do you welcome the most? Please share your thoughts in the comments section below.

Bill wrote on June 12, 2018 - 12:18pm Permalink
It's nice but when it comes down to it, the Mazda Miata is still a two-seater rear wheel drive sports car.
Bill wrote on June 12, 2018 - 12:29pm Permalink
Also: As long as it stays true to the original Miata, which it basically has, more power is always welcome in my eyes.
Ariel wrote on June 12, 2018 - 12:30pm Permalink
I am curious if the internals of the 2019 Mazda Miata will be better or worse for boost applications.
Max Marck wrote on June 13, 2018 - 9:03am Permalink
I was thinking the same thing. New pistons...forged ones please?
Scott wrote on June 12, 2018 - 12:36pm Permalink
Depreciation of MIata! I’ll happily let someone else shoulder that burden. Great car though, can’t deny.
Matthew wrote on June 12, 2018 - 12:37pm Permalink
I am hoping it means an upgraded and compatible transmission, potentially a v5. FM noted a stronger housing I think but they seemed to think it wouldn’t be compatible with the nd1.
James Biersmith wrote on June 14, 2018 - 6:36pm Permalink
I may be old school, but I doubt that anything can top my bone-stock 2004 Mazdaspeed MX-5 with only 17,600 miles on it! One of the finest cars I've ever owned!
LAMike wrote on June 17, 2018 - 1:44am Permalink
Why so little use?. I have a 2016 ND Cl;ub m/t with 10K on it already. The low miles won't appreciably affect the resale value.
Jim biersmith wrote on June 18, 2018 - 10:09am Permalink
Unfortunately, it's my weekend car and I live in southern Florida, which means I can only drive it in the cool months of Winter down here!
John McCown wrote on November 4, 2018 - 11:13am Permalink
I have a 2017 cub got the openflashtablet. So mine can see 7500 more than it should. But it make the throttle body go wide open work with the gas pedal. No fast how a car,boat, or motorcycle went I always wanted fast from when I was 12 now at 72 I have to slow down to just 20 mph over the speed limit in Florida or they take your license away got a ticket for 93 but just before that I was around 125 in 5 gear 6 gear drops off. But my old back likes the new spring seats over the 2005 mazdaspeed miata foam seats. But I had put new coil over shocks,Urethane Bushing, 2.5 Exhaust,etc it was the best handling car I think I ever had. But hard on my back and for the year I had it not a week went buy it didn't see 130 so I had to let it go. For the price and fun it is the best car around. It is a lot more fun than a corvette. But the vet is a lot faster but where can you go 200+ I had one I worked on when I was a kid he would drive much over 140 but I got to 170 in. We had mile marks out the speedometers weren't that good.But I love my 2017 0 to 100 it is quick if you red line at every shift.