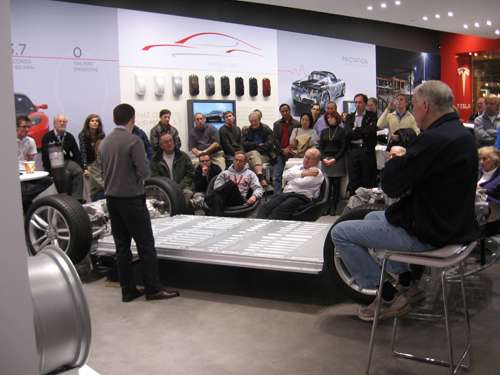 Why Tesla is talking replaceable batteries and why it won't work

Based on a recent Tweet from Elon Musk and a hint dropped in Tesla’s quarterly report, the firm may be working on a replaceable battery scheme to speed up recharging, or is at least promoting the notion it might have such intentions.
Advertisement

"There is a way for the Tesla Model S to be recharged throughout the country faster than you could fill a gas tank," Musk stated via Twitter.

Of course they are working on new technology, but how could the Tesla Model S switch out batteries when the battery pack is housed in the chassis of the vehicle?

The picture at right is from a technical presentation at Tesla's Park Meadows Salon 18 months ago. It shows the chassis of the Model S and the elements of the battery pack therein.

Even the batteries used by hybrid cars weight hundreds of pounds and are usually configured behind or beneath the rear seats.
Just how is such a scheme supposed to work?

Plug and go cartridges might be suitable for CNG or fuel cell vehicles as it would be much easier to convert the fuel intake of such vehicles to a modular refueling system. Gas canisters somewhere between the size of propane torch and a SCUBA tank could be popped in and out of self-sealing ports.

On the other hand, the safest place to carry hydrogen in a vehicle is where the drive train hump is traditionally – this places the explosive gas as far from impacts as possible in the most rigid part of a vehicle.

Tesla has recently gone public with a stock offering, so naturally it does the firm no harm to hint at good things to come. It seems to be working too, as CleanTechnica.com reported that during the first quarter of 2013, The Tesla Model S outsold equivalently priced models from Mercedes, BMW and Audi.

Not exactly a fair fight, but a reasonable comparison for statistical purposes.

In other news, The Christian Science Monitor reports how a Silicon Valley electric car venture’s efforts to promote battery-swapping systems in Israel and Denmark is sputtering. The firm is called Better Place and it is working with Renault’s Fluence ZE vehicles, but the system is failing to win over consumers.

"When you look at the overall trends, we must conclude that replaceable batteries are no longer the main track for electric vehicles," Carlos Ghosn, Renault CEO told the Danish news site Energi Watch.

So chances are Tesla is up to something, but they are playing things close to the vest, while maintaining an upbeat countenance to advance its business planning.

If you were Elon Musk, isn’t that how you would play this new-kid-on-the automotive-block game?