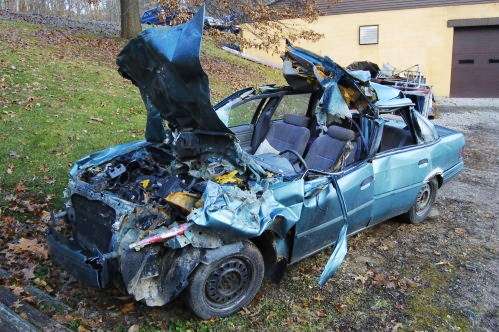 The varied consequences of drunk driving in different countries

Drinking and driving in any form of transportation is a recipe for calamity, so it is little wonder the authorities in many countries look down upon this behavior with grim disdain.
Advertisement

At best, drunk driving can result in damage to property like trees, telephone poles, fences, the occasional domicile, et cetera. At worst it costs innocent lives, bereaving their relatives, while frequently the inebriated perpetrator emerges unscathed. That’s when the law steps in.

In Australia, not only are you arrested, but local newspapers are also notified, and print the names of offenders under a heading reading He’s Drunk and in Jail. We don’t think this is meant to imply they serve cocktails in lockup Down Under.

In Malaysia, if incarcerated for drunk driving, a man’s wife is jailed along with him. In this situation we suspect it is in no way a conjugal arrangement.

In post-apartheid South Africa, motoring after martinis can land you in prison for 10 years along with a fine of $10,000. If that sort of sanction was enacted in the US, we could revive the construction industry having it build drinker’s prisons full time for years

Around the world, in the Asian nation of Turkey, drunk drivers are taken 20 miles outside of town and forced to walk back under police escort (who most likely are riding in a car). From what we know of dedicated drinkers, this might be an effective form of behavior modification – we don’t know many lushes that like hiking at all.

In the Northern nation of Norway, a first offense brings three weeks of hard labor and the loss of your license for a full year. The next violation, if within five years, results in negation of driving privileges for life. There would be a lot more people in taxis, buses and trains if that were true in the US.

In sunny Costa Rica, where the Pura Vida philosophy is embraced, DUI’s were traditionally overlooked. Recently, they have updated the statutes to provide a fine of $455 for a BAC over .075. Remarkably, you can still drink while driving legally in the Central American nation.

In Russia where Stolichnaya is practically a sacramental libation, drunk driving is given zero tolerance. A single violation results in suspension of your license for life. This is probably a wise decision because Russia is known to have some of the worst drivers and accidents in the world, confirmed in an interview with an international businessman last week. On the highways and byways of the former Soviet Union, your life is literally in the hands of the persons driving the vehicle you’re in and the ones nearby.

In the Muslim world, where drunkenness is considered an affront to Allah, drunk drivers in Saudia Arabia are tied to the whipping post and publicly lashed for the offense. About 20 lashes was once a death sentence for most people, before the advent of modern medicine. You have to admit, though, intense pain and public humiliation could be a powerful deterrent. Chances are second offenses are an extremely rare occurrence.

Our neighbors, Canada and Mexico empower their border guards to deny entry to anyone convicted of a DUI. In Canada, an offense will leave you with a criminal record up to the level of a felony, in addition to fines, jail time and loss of license. It’s a definite no-no north of the border.

In Mexico, where drivers can be pulled over for random tests, penalties vary from state to state. Most involve jail time and loss of license for a length of time based on the offense. It increases if you crash the car or damage property or injure others.

One of the places you least want to be guilty of drunk driving is Japan. Here a blood alcohol content of .03 to .079 will land you in jail for three years with a fine of $4,000. With a BAC of .08 you are treated to a five-year stay in the house of detention and a staggering fine of $8,800. Me like Sake too, but no, no, no!

In China, you can be convicted of a DUI with a BAC of only .02 (one drink) resulting in a fine of CNY 500 and a one to three month license suspension. If you have a BAC over .08 you can be sentenced to up to 15 days in jail and lose your license up to six months in addition to a fine of CNY 2,000.

What few people realize is that you can be convicted of drunk driving operating any form of transportation, including bicycles, horses, boats, mopeds and even wheelchairs or Hoverounds. In the video below the suspect is indulging in a drunken joyride on a stolen motorized wheelchair. The law probably applies to skateboards too, but such an offender would probably be looking at charges above and beyond just driving drunk involving the legal age for the intake of liquor.

In conclusion, buses, taxis and trains are much cheaper than a DUI conviction almost anywhere. Keep it safe out there.

Aaron Turpen wrote on August 18, 2012 - 3:12pm Permalink
Seriously... why is it illegal to be drunk while "driving" a wheelchair, skateboard, etc? Who are you going to hurt? In my view, if the only possible serious victim of your stupidity is yourself, then there's no point in having a law against whatever the activity is. Really. If the worst that can happen while you're drunk on a skateboard is you fall into traffic and get killed by a car.. who cares? Having cops enFORCE this kind of stupid lawmaking is ludicrous. It's for this reason that they don't bother investigating real crime. When was the last time a cop investigated a stolen car stereo, parking lot vandalism, or a mugging? Ya, none of those result in revenue for the department, so they aren't interested. Writing tickets and bolstering arrest numbers by going after victimless crimes is where it's at nowdays.
Tre Deuce wrote on August 19, 2012 - 2:14am Permalink
Hurting yourself could cost the public, reason enough for citing you. So far walking isn't classified as 'WUI'
Aaron Turpen wrote on August 19, 2012 - 2:54am Permalink
If we're going to use that justification, "could cost the public," then EVERYTHING becomes a legitimate excuse to throw you in jail. Like drinking soda? Sorry, could cause you to get an ulcer or have a heart attack, so it's illegal now. Enjoy beef jerky? Sorry, contributes to heart disease and can cause other health issues. Illegal. Like to walk to the park on a Sunday afternoon? Woops, you could fall and hurt yourself doing that. No longer legal. Like to cut your own food into bite-sized bits while eating? Uh oh, that knife is dangerous, you could hurt yourself. Sorry, outlawed. Think bungee jumping is fun? DOH! It's dangerous, you could get hurt! Illegal. Working out? Playing baseball? Trampolines for the kiddies? Nope, nope, and nope. All illegal now. Where would it end?