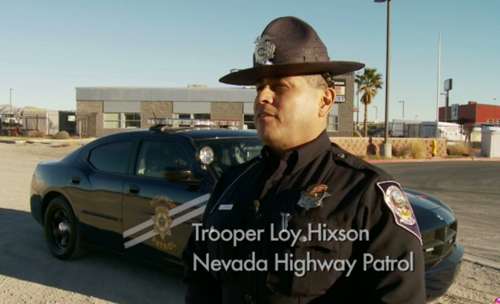 It was 20 years ago that Mother Jones warned us about swoop-and-squat insurance fraud, but now the masterminds targeting the insurance industry have found a mark with much deeper pockets – the over-the-road truckers who, due to the size and potential havoc the big rigs could cause, are required to carry massive amounts of liability insurance.
Advertisement

According to fellow TN contributor Aaron Turpen, a former big rig jockey himself, the liability insurance semi-trailer tractor drivers carry can be up to $5 million or more, depending on the states the load travels through.

So the drivers who swerve in front of 18-wheelers and stop suddenly on purpose, in a treacherous form of freeway roulette, stand to make a lot more money for the fraudulent perpetrators behind them when such accidents are staged.

The rash of current incidents reported by the National Insurance Crime Bureau is occurring in the I-15 corridor of Las Vegas over the past 12-18 months. Out of 100 alleged swoop-and-squat scams, one in four were aimed at big rig trucks.

"The people behind these staged accidents are criminals, preying on trucking companies and endangering our drivers and the public," admonished Paul Enos of the Nevada Trucking Association. “When a driver is behind the wheel of something weighing 80,000 pounds, and someone deliberately slams on the brakes in front of them, it's not going to be a good day for anybody."

The scams still have one element carried over from the staged accidents of two decades ago, noticed thanks to Mother Jones. Many of the perpetrators are day-laborers, either paid to risk life and limb in the despicable deed, or simply duped into riding along to an alleged work site, but really there to increase the potential liability the scam can exploit.

"In some cases, we are coming across the same people at different accident scenes," stated Trooper Loy Hixson of the Nevada Highway Patrol. "They use different cars and different names, but we collect every bit of information and that's a red flag that these are willing participants being paid to participate.”

Authorities are requesting citizen input on these incidents – obviously the potential to wreak havoc borders on terrorism, especially if hazardous materials are involved.

Michael Geeser of the Nevada Insurance Council urges motorists to report anything they suspect of being a staged accident to the Nevada Highway Patrol or by calling 800-TEL-NICB.

Of course, anytime such fraudulent efforts gain too much attention in one region they simply move to another, so residents of the nation should be aware of the potential for swoop-and-squat fraud.

Pictures or video of vehicles and people involved, license plates and additional information on participants can assist in the investigation.

To raise public awareness of the issue, NICB has produced broadcast PSAs in both English and Spanish for local TV and radio stations.

They are working with member companies, such as the Nevada Insurance Council, the Nevada Highway Patrol, and the Nevada Attorney General's Office to identify and track down the organizers behind these schemes.

Personally, we’re not going to hold our breath while we wait and hope you’ll pardon the fact our cynicism is showing.

The folks who brought us the Lehman Shock, Countrywide fiasco and Bernie Madoff are still out there and doing more to bring down our way of life than the Taliban and Al Qaeda combined.

Will enough ever really be enough?