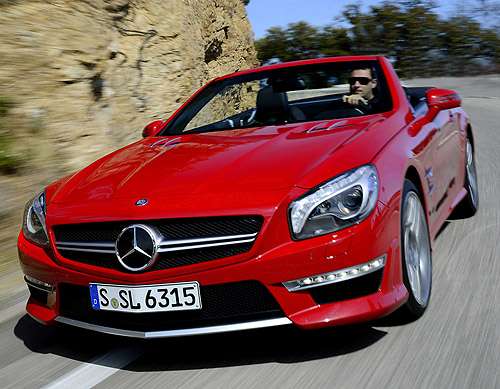 When the Tour d’Elegance convenes at Pebble Beach this week, the 2013 Mercedes SL63 AMG will mingle with six significant variations of the SL-class from the early days of the breed in the 1950’s.
Advertisement

The iconic SL, with its six generations spanning as many decades, is among the few models that truly embody the heart and soul of a classic luxury sports car.

Still highly prized among car collectors, the SL models will be displayed at the Mercedes-Benz Star Lounge, on third fairway of the Lodge at Pebble Beach. The vintage examples of the SL lineage will also be joined by the 2013 SLS AMG Coupe and the C63 AMG Black Series – cars that represent the next level of high performance, style and dynamic driving as core characteristics of the brand

The new 2013 SL63 AMG is the crown of creation for six decades of technical excellence and innovation. It is the crisp, clean, no caffeine Mercedes-Benz Super Light roadster, so called for its aluminum body. This same approach dropped over 200 lbs. off the bulk of the 2013 SL550c, mentioned in Torque News reports on the Rocky Mountain Driving Experience last June.

Another indication of the SL’s importance in the lineage of luxury sports cars is the simple fact the new and legendary models will lead the Tour d’Elegance at Pebble Beach when presented by Rolex August 16.

The event’s array of AMG cars salutes the performance brand’s 45th anniversary and its expanding model range, now consisting of 17 high-performance vehicles producing outputs from 415 hp to 621 hp larger. The more diverse group of AMG vehicles is sure to please the iconoclastic desires of passionate AMG enthusiasts. In the U.S., the MY2013 range will include 17 AMG .

The selection of models available includes the SLS GT AMG super sports car, as well as coupes, sedans, SUVs and roadsters. Opportunities for exclusive test drives of the 2013 SL63 AMG will be provided at the Quail Motorsports Gathering on August 16th and 17th.

In addition to SL models from both the past and present, a future vision of the model line comes in the Mercedes-Benz Concept Style Coupé, a 4-door striking and forceful incarnation. A new four-cylinder turbocharged gas engine developing 211 hp powers the concept coupled to the 4MATIC all-wheel drive system. The Concept Style Coupé is a maverick that stands out from the herd with its sporty phenotype and serious stance that give the coupé its unique appearance. The Concept Style Coupé will be on display at the Mercedes-Benz Star Lounge throughout the even.

Several highly covetable Mercedes-Benz cars will be up for grabs in the popular auctions, such as RM and Gooding & Company. On display at the Star Center, models to be auctioned include a 1936 540K Cabriolet B, in addition to several vintage SL models. These include two 1955 300SL Coupes and a few classics restored by the Mercedes-Benz Classic Center in Irvine, CA: a 1963 190SL, a 1968 280SL and a 1969 280SL.

In addition, a small group of museum pieces from the Mercedes-Benz collection in Stuttgart, Germany will be on hand for the famed Pebble Beach Concours d’Elegance at the 18th Fairway on August 19. Among these will be an exquisitely restored 1930 Mercedes-Benz 27/140/200 Type SS, originally commissioned by a Maharaja and also an 1885 Daimler Reitwagen, the world’s first true motorcycle.