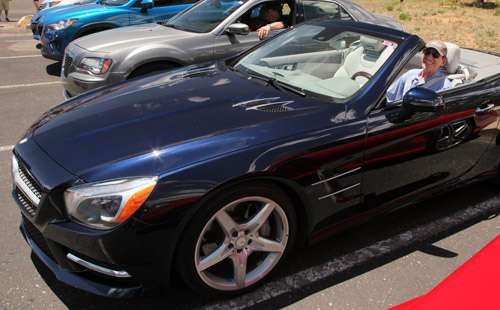 As Day One of the Rocky Mountain Driving Experience progressed, we arrived at the next vehicle exchange well past Nederland, and bid a fond farewell to the 2013 Range Rover HSE Sport, moving from the land of luxury to that of practicality in the 2012 Nissan Juke.
Advertisement

During the 2011 RMDE, the Nissan Juke was a favorite vehicle on the offroad rally course and got a good write up when it came around as a media loaner. So it was no hardship to drive it on to Estes Park along with Nissan rep Steve Parrett.

We discussed the viability of the little hatchback and how well it fit into the lives of the young, active urbanite who works and plays hard but does it all with eye on the bottom line. It also stands out in the parking lot with its unique features that will become even more striking when the 2013 model comes out later this year.

Driving through the green of the Colorado foothills, a couple of ridges away rose the plume of smoke from the High Park Fire that has consumed 54,232 acres, 112 homes and one poor soul over the last week.

However, the effects of lightning on forests ravaged by voracious hordes of pine beetle are well known and were completely out of sight when we arrived at the beautiful and historic Stanley Hotel for lunch provided courtesy of Chrysler.

Chrysler representative Wendy Orthman presided over the presentation of “Dart” boards on a commercial model called “Viper” by the manufacturer to six to eight of those attending by way of a business card drawing.

Then the RMDE assembly followed representatives from Dodge out the patio before the Stanley Hotel where the 2013 Dodge Dart and Dodge Dart RT were staged for another presentation.

The Dodge Dart is notably the first Chrysler product truly benefiting from the alliance with Fiat, and is based on elements of the award-winning Alfa Romeo Giulietta. The compact sedan is sleek, roomy and well equipped at an attractive price point.

It was a disappointment never finding one unoccupied during the event to experience its performance first hand – such was the interest generated by this all-new offering from the brand. Notably this is the first small car from the line since the Dodge Neon, last sold in the U.S. during 2005.

Interestingly, the lobby of the Stanley Hotel contains a 1906 Stanley Steemer. In its day, electric cars were replacing the steam engine as combustion engines were producing greater range, taking the place of early EVs as the roadways demanded greater range.

Today, diesel and high-mileage vehicles like the Dodge Dart are replacing traditional gas-guzzling V8s while battery technology is working to provide extended range for EVs.

After a delightful hour layover at the Stanley, we began the return to Denver by selecting the exquisitely designed and sophisticated 2013 Mercedes-Benz SL 550c for a bit of “dream time” along the next leg of our journey.

Driving this classic but tech-savvy roadster is like riding on a cloud with exclusive access to the jet stream. It has automatic bolsters that gently hug you on the appropriate side whenever lateral g-forces are detected. A rear windscreen prevents your hair from blowing into your face even at high speeds – provided you have enough for it to do that in the first place.

With Diedra Wylie, attending brand rep for Mercedes-Benz along for the drive, we left Estes Park in the sixth generation of the classic convertible since its introduction in 1954. She pointed out the SL 550c now sports an all aluminum body to save weight and also described how the new smart washer technology applies fluid to the windshield directly from the wiper blades. This means the windshield can be cleaned even at speeds that would only give the occupants a shower in some of the old rag tops.

It was a beautiful day for open air driving and whatever you look like, we guarantee you’ll look better in a 2013 Mercedes-Benz SL 550c.
At the next vehicle exchange point, after several RMDE volunteers pried me out from the driver’s seat of this gorgeous cabriolet, I slowly came down to Earth once more, selecting the 2013 Mitsubishi Outlander.

The brand’s personable and informative representative, Christine Jew, came along to provide info on the brand and the mid-size Crossover now in its third generation. The first thing noticed was its crisp, clean, no caffeine interior. The gauges and controls are simple and easy to understand – a refreshing break from those that seem as complex as the interior of an F-15.

Roomy with lots of cargo area, the Mitsubishi Outlander has a car-like drive, adequate acceleration for urban commuting, and corners well for a mid-size crossover.

Over the long and pleasant journey, we discussed the company’s troubled recent past since recalls and a disastrous loan program reduced their market share to dismal numbers in the U.S. The company has responded by returning to basics to reinvent itself as a brand, trimming its line to only three basic vehicles and their variants in the U.S. market, namely the Outlander, Lancer and Galant.

These are of course complimented by the all-electric MiEV, now available in select markets. It will be followed by a plug-in hybrid variant of the Outlander next year, with an all-electric range of 31 miles.

We think many will like the Mitsubishi Outlander’s style, versatility and features –provided they find the price competitive and overlook the automakers past mistakes. The model we drove during the RMDE, with optional features totaled roughly $33K.