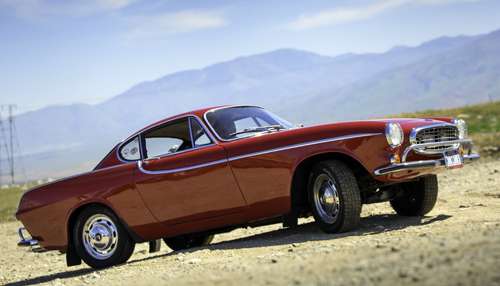 The man who drove 3 million miles in a Volvo

It is a story for the record books and Volvo plays a central role, but perhaps the strangest aspect of the tale is the fact the man who drove 3 million miles in a single car lives on an island 118 miles long.
Advertisement

Irv Gordon, a resident of New York’s Long Island, bought a shiny red Volvo P1800 in 1966. Thus began the long, long journey of a man and his machine that has spanned the globe and nearly 50 years. The little red sports car will cross the 3 million mile threshold late this summer.

Remarkably, there is no mention of heroic mechanical intervention to keep the classic going – Gordon is simply a stickler for regular maintenance and safe driving in the car he has loved and cherished from day one.

He knows the mileage is just a landmark – this story is all about the journey and the people and places the P1800 has allowed Irv to experience.

It is a sentiment we can thoroughly support – auto touring throughout this marvelous land is one simple way to rediscover awe and wonder – and all you have to do is get off the Interstate!

"The best way to explore America is by car," Gordon added. "I challenge everyone to go out and see as much as possible. Find your own journey and reason to believe because you only have one life to live. No matter how many roads I've been on, there's always one I haven't taken. That's what makes it exciting."

Gordon, you’re our kind of fellow.

Today, the 73-year-old retired science teacher from Patchogue NY still holds the Guinness Book of World Records title for most miles driven by a single owner in a non-commercial vehicle. That was established when he hit 1.69 million miles1998.

In 2002, Gordon drove the Volvo P1800 through Times Square before the International press to turn over the 2 millionth mile on the old odometer.

Today the still shiny, remarkably preserved P1800 has racked up over 2.99 million miles.

"I bought my Volvo P1800 on a Friday, and immediately fell in love," Gordon reminisced with a smile. "I couldn't stop driving the car. It was a long holiday weekend and I brought the car back to the dealership the following Monday for its 1,500-mile service."

With a 125-mile commute every day, his compulsive dedication to maintenance paid off in spades – Gordon drove the Volvo 500,000 miles by 1976. He credits its long life to taking his pride and joy regularly to the same certified Volvo technician over the last 15 years.

"Because Irv follows the owner's manual and truly cares for and loves his car, I have no doubt he'll reach three million,” remarked Nino Gambino, an A-rated technician with the Huntington Volvoville dealer where the car was originally purchased. “Irv always says he takes better care of the car than himself and he's fun to ride with on trips because you don't need a map."

Gordon probably knows the highways and byways of the US better than the Rand McNally Road Atlas. To get to the 3 millionth mile, he plans to revisit some of his favorite places and stretches of highway, slowly making his way to the only North American state he’s never been to – Alaska! You couldn’t pick a better backdrop to set a long-standing world record than the 49th State.

"I'm realizing this will be a record that no one will surpass," Gordon mused. "So, these next few thousands of miles will be special and sentimental for me. I'm looking forward to visiting my favorite places in big, beautiful America - from national parks to roadside cafes, from the Pacific Coast Highway to small roads that are miles from the Interstate."

Of course the brand is proud of Gordon and his amazing accomplishment was enabled by one of their well designed and built cars.

"For every mile Irv has logged in his Volvo, there have been just as many reasons why he's been able to do it - from his meticulous care, on-schedule oil changes and his safe driving practices - all the way to Volvo's legendary attention to engineering," said John Maloney, president and CEO of Volvo Cars of North America and a personal friend of Irv’s. "A distant predecessor to today's models, the Volvo P1800 and Irv are the living embodiment that Volvos are enduring and designed around you. We look forward to following him on this journey, and finding ways to bring our customers and car enthusiasts everywhere along for the ride."

You can follow Irv Gordon as he crosses the continent by clicking here.

“Send me an invite and maybe I'll meet you for a cup of coffee," Gordon concluded.

Could well be one of the most entertaining cups of Joe you’d ever drink.