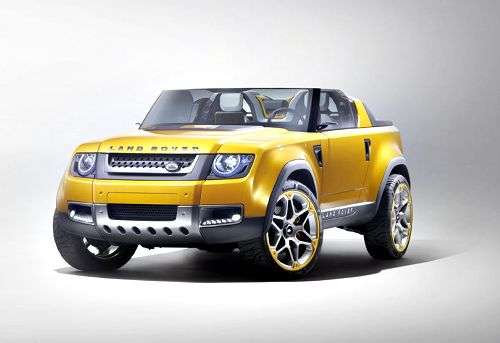 Land Rover’s Defender concept cars have radical new capabilities that would have saved some American drivers from being stalled by the recent torrential rains about the country – sonar sensors that can determine if water is too deep to pass through!
Advertisement

For more than 60 years, Land Rover has been creating all-wheel-drive vehicles that define capability, versatility and usability like no other vehicle. The Defender has inspired humanitarian efforts the world over. It is the initial reconfigurable vehicle, taking people beyond the limits whether explorers, ecologists, UN aid workers or Red Cross medics.

The Land Rover DC100 is demonstrating several remarkable new technologies at the Frankfurt Auto Show and proving it’s enviable status as THE Terran Excursion Module – if this vehicle won’t take you there, you really don’t want to go!

Auto Terrain Response
Though the Land Rover has always had terrain selection, now powerful new off-road sensors and adaptive systems will extend the capabilities of the Land Rover Terrain Response program, allowing it to automatically adapt to any environmental conditions without driver pre-selection.Terrain Response on the DC100 concepts utilize High-Definition cameras mounted up front to analyze the ground ahead. Then comparing this to images stored within a neural network allows the system to distinguish the difference between sand, grass, mud, gravel, snow and asphalt.

Intelligent Terrain Mapping
Land Rover’s DC 100 concepts contain an early-warning system, the cutting-edge Terrain-i mapper that creates 3D visualisation of the ground ahead, displaying it on the video screen. Like the systems fighter pilots use, Terrain-i uses a headlamp-mounted scanner running complex algorithms to assess the best route ahead and warn the driver of obstacles too large to be safely navigated.

Wade Aid
Land Rover has developed a sonar-based system for determining water depth, allowing informed decisions on whether to venture into inundated areas. The system utilizes sensors mounted in the bumpers and sideview mirrors. These are able to measure depth, working in conjunction with inclinometers to determine whether the level is increasing or decreasing. This information is relayed to an intuitive graphic on the video screen.

On-Demand Spiked Tires
Straight out of James Bond is the ability to deploy spiked tires. This is operated by an electro-mechanical system mounted within the tire on the inside of the wheel; activation of the technology causes air to inflate a secondary air chamber, filling pods moulded into the tread of the tyre which contain the spikes.

Leisure Key
Land Rover has adopted Radio Frequency Identification (RFID) technology to increase the accessibility, usability and security of the concepts. You can leave your key in the glovebox, taking only the rugged RFID chip with you. The key is thus deactivated and only that specific RFID smart tag will allow it to be unlocked and reactivated. Planned advancements would allow every family member their own smart tag, which would save personal audio, climate, communication, safety and seating settings. The next generation smart tags could also include facial recognition systems to take security to its ultimate level.

"Loved the world over for its simple, honest and distinctive design, we are determined that the new Defender will be true to its heritage while meeting the requirements of a changing global market," stated John Edwards, Global Brand Director for Land Rover.