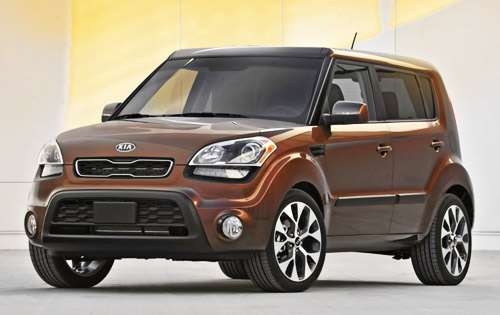 The 2012 Kia Soul Red Rocks, seventh in a series of special editions of the popular car with the viral hamster commercials, is named for the Jurassic Red Sandstone that crosses the southwestern U.S. from western Kansas, through Colorado and Utah.
Advertisement

The unique exterior color of the Kia Soul Red Rocks edition was inspired by the stunning formations created by surface eruptions of this prehistoric strata as the hoodoos, synclines, anticlines and arches of Red Rocks Amphitheater, Garden of the Gods, Roxborough Park, plus Arches and Bryce National Parks.

"The wildly popular Soul has been a game-changer for Kia since it arrived in 2009, and our series of special editions over the past three years have added individualism and exclusivity to an already fun and youthful vehicle," said Michael Sprague, vice president of marketing and communications, KMA. "Style and flair are key to Soul's success, and the Red Rock Special Edition, which has plenty of both, will help drive sales into 2012."

The special edition was first shown at the 2011 New York auto show as a concept. Following a U.S. tour of the concept, sufficient interest was generated to lead the manufacturer to produce the special edition, which will arrive at locals dealers this coming June.

The production model is set it apart from other Soul variants by its own cadre of special features added to the refreshed 2012 Kia Soul, which sports a significant number of tech and powertrain improvements. Among these are the choice of a 1.6 or 2.0-liter engine with 16 valves and CVVT, with respective output of either 138 hp and 123 lb.-ft. or 164 hp and 148 lb.-ft. of torque. Both powerplants drive six-speed transmissions, but the smaller comes with a stick while the 2.0-liter engine has an electrically controlled automatic with overdrive.

Both versions get up to 35-mpg on the highway and a still respectable 27-mpg in town. The base price of the Kia Soul has slowly climbed as popular tech and features have been added to $13,900. The 2012 Kia Soul Red Rocks special edition is a significant jump starting at $20,600.

Slated for introduction later this year, the Kia Soul will be one of the first in segment to offer ISG technology, a fuel-saving feature that turns the engine off when not in motion, for example, at a stop light or if stopped in traffic.

Without empirical data to go on, we rely upon manufacturer reports that this stopping and restarting of the engine is seamless or buyers would not be readily accepting of this new technology.

Though not the ride for everyone, the 2012 Kia Soul Red Rocks is bound to hit a chord with fans of the dancing Hamsters and who knows? Maybe the fabulous, furry faced hucksters will put on a show at the world famous Red Rocks Amphitheater in the new edition’s honor.

If so, we’ll see you there!