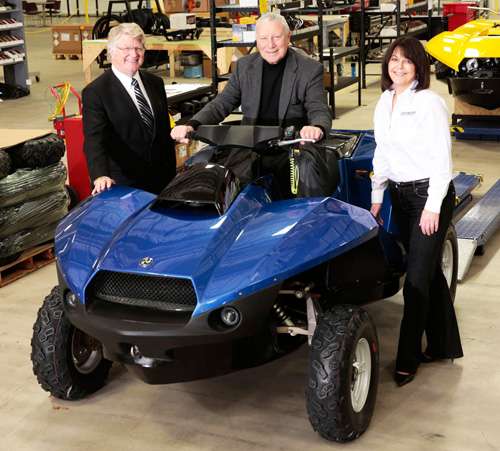 The first amphibious ATV is now manufactured in Detroit

Over 660,000 ATVs were sold last year alone and offroad trail riding on these four-wheel-drive wonders is a popular form of leisure nationwide, but can a conveyance with wheels change its spots and take you across the local lake?
Advertisement

If Gibbs Technologies has anything to do with it one can. They are the company behind Gibbs Sports Amphibians who began producing the Gibbs Quadski amphibian ATV in a 54,000 square foot facility in Auburn Hills MI. this week.

Already drawing media comparisons to something from MI6’s Q Branch, from which James Bond got all those awesome toys, the Quadski can attain speeds up to 45 across the back 40 or whatever body of water is at hand, reportedly switching from land to see in a short five seconds.

After 15 years in development and a cost of millions in research dollars, the new sport vehicle went into production following Job One ceremonies attended by officials of the company and local government.

Gibbs plans to build approximately 1,000 Quadskis by next October, employing over 200 people when production reaches full capacity later next year. The amphibious ATVs will be sold at major powersports dealerships in the Midwest and eastern United States, as well as locations in the Great Lakes and Gulf Coast regions.

The company has implemented a flexible manufacturing system at its Auburn Hills plant to support production of several high-speed-sports amphibian products beyond the Quadski, according to Neil Jenkins, Chairman Gibbs Sports Amphibians

The manufacturing line resulted from four years of effort on the part of a core group of manufacturing personnel, engineering, manufacturing, purchasing and quality control staff members.

The facility is located at 50 Corporate Drive in Auburn Hills and features high ceilings, large open areas and docking facilities necessary to supplier-built sub-assemblies. Such third-party assemblies are an integral part of the company's flexible manufacturing system.

"The GIBBS Quadski is a quality product that has been specially designed for families and individuals who enjoy the outdoors, watersports, off-road travel, hunting and fishing. It offers premium powersports buyers a combination of power, comfort, versatility and freedom that has never been available before."

Notable media quotations
"Amphibious vehicles could soon be zooming out of James Bond's garage – or pond – and into yours." –The Associated Press

"Whatever you are riding today we guarantee it can't do what the Quadski can." – ATV Illustrated

"If you've ever daydreamed of being James Bond, here's your chance to take that to the next level… for $40,000 you can ride, perhaps, the coolest vehicle on earth. It's called the Quadski." – CNBC Online

"There are some things in life that just make you want to scream out: 'I gotta have one!' Just take one look at the awesome new Gibbs Quadski and can't you just picture yourself blasting along the Intracoastal and heading out to the beach to frolic in the waves?" – Palm Beach Illustrated

“Forty-thousand dollars for an ATV? You’ve got to be kidding!” – Torque News

We guess it makes sense if you can ride it to work – or you don’t have to!

Karen Tokarczyk wrote on December 6, 2018 - 2:50am Permalink
Where can I purchase two Quadski vehicles? I live in Northeastern Minnesota.