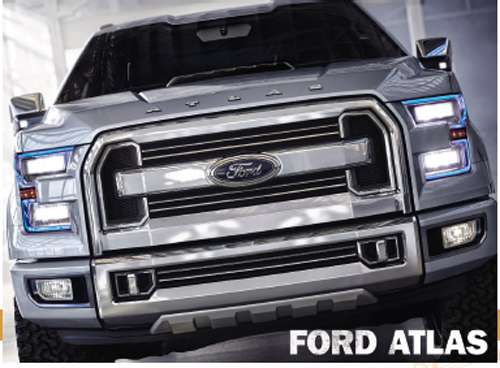 The Ford Atlas Concept has generated a lot of interest as Ford looks to the future by reimagining every aspect of what a truck can be – Torque News talked with Gordon Platto, Ford’s F-Series Chief Designer about the non-production model this week.
Advertisement

First, it is clear Ford is very proud of its 36-year leadership in the pickup segment with the Ford F150 and that note rang out clearly through everything Platto told us during a telephone interview. The purpose of the Ford Atlas F150 Concept was purely intended to help maintain that leadership.

“We want to make sure we stay in that position,” Platto stated. “It’s not a production vehicle, but the production designers are always looking to the future. You know, what’s the next big thing in trucks?”

One of the features present in the earliest sketches of the design were the automatically shuttered wheels, a fully developed concept that would close the windows between the spokes of the wheels at high speed to improve aerodynamics – it is but one aspect of many features working in congress to that end.

“The primary function behind the wheel shutters was a way to really improve fuel efficiency in the future,” he said. “It’s just one of the concepts we came up with.”

This system results in “better airflow around the wheel that actually works in harmony with other features we’ve designed (into the Atlas) as well. Active grille shutters will shut the grille down and that does the same thing to make air go around it. Underneath the bumpers are air dams that operate at the same time as the wheels and the grille to provide better air dynamics.”

When we referred to the Active Wheel Shutters as a fully developed concept, it’s because the device was designed and built for the concept.
“If you could look behind the wheel you wouldn’t believe the mechanism it took to create the Atlas. It was a really fun project that had everybody thinking out of the box a little bit.”

During his tenure as F-Series Chief Designer, Platto has been invited to participate and was ultimately involved in numerous show projects and many actual production vehicles.

We wondered how Platto’s work on the Ford Atlas F-150 Concept compared with some of his other work for the brand? First he explained how complex the project became.

“I think of managing and designing all of the parts. I’ve never seen so many parts and so much detail go into a vehicle – between the aesthetic part of designing it and the mechanical part of all the neat features that come with this truck.

“It was a challenge to get it all functioning and make it look good and purpose built, as well,” he continued.

He admitted Ford’s customers are not fond of plastic and are very genuine and honest folk – they expect similar qualities in the trucks they buy.

As it turns out, hardly anyone appreciates dysfunctional products.

“So making it all work, look functional and making it look its part was a pretty significant challenge. That and giving it the DNA of a Ford Built Tough truck.”

Challenging as the Ford Atlas F150 Concept was, it became obvious it was labor of love.

“We enjoy meeting our customers’ needs and it was just a lot of fun to see the responses and get the feedback this vehicle has given us. It has really given us a feel for the DNA of our customers.”

So far, most of what is known about the Atlas Concept concerns the exterior and when we asked what the interior might be like, Platto revealed the overriding philosophy of design Ford employs in all their trucks.

“One of the things we do here at Ford, and I believe we’re the first in the industry, is to really start separating and segmenting the different needs of our customer base.”

He pointed out how modular elements can be added to both the exteriors and interiors of Ford trucks to differentiate a basic work truck from a King Ranch or Platinum model.

“The premium trucks have a lot more bling than the XLS and so forth.”

He also noted how the role of the truck in American life has changed and how fewer and fewer of them are used solely for work.

“They (truck buyers) are all about work and the lifestyle they live after work, so our trucks need to fit a dual purpose for both a customer’s work and their lifestyle.”

Platto presumed if it does go into production, the Ford Atlas F150 will probably get its primary finish as a Platinum model, with variations available.

“If we ever take something like this into production,” he added, “it would be designed in a similar way so we could pop modular parts in and out for different customer needs.

“The Atlas showcases our commitment and our passion for trucks in general within the company,” he concluded, “and we want to make sure that is recognized.”

We’re inclined to take him at his word – and that's beyond a shadow of a doubt.