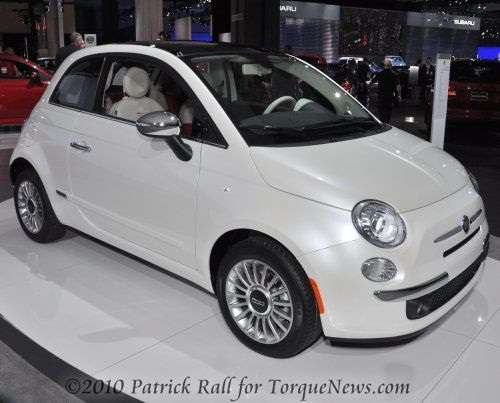 After an absence of nearly three decades the Fiat 500 is winning hearts and minds as Consumer Reports calls it a "fun to drive" fuel-efficient car, even though they fall short of putting it on their "recommended" list.
Advertisement

The magazine’s October issue tests fuel-efficient vehicles and though they found it to be a likable urban car a tight rear seat and stingy cargo area kept it from getting their full endorsement.

The quick and easy way to a car with better fuel economy is usually buying a very small car with a tiny engine. That approach comes with certain shortcomings. The Fiat 500, a sporty car with retro styling is one such example. The 500's 1.4-liter four-cylinder engine gives it an overall fuel economy of 33 mpg.

"The tiny Fiat 500 has agile, go-kart like handling, a rev-happy engine, and a crisp-shifting manual transmission that make it fun-to drive," said David Champion, senior director of Consumer Reports' Auto Test Center in East Haddam, CT. "But slow acceleration, a choppy ride, and a noisy cabin are demerits."

The issue also has a comprehensive road test of the Chevrolet Volt following seven months and three seasons of ownership. They found the fuel economy varies with weather and driving conditions, ranging from the equivalent of 99 mpg on electric power alone, but dropping down to a less impressive 29 mpg overall when running only on gasoline.

CR's engineers found that the Chevy Volt is very inexpensive to run on short trips, but when the gas engine kicks in and trips reach 70 miles, traditional hybrids quickly outdo its running costs. While the creative combination of a large battery, electric motor, and gasoline generator works well, the Volt has some practical shortcomings they concluded.

The CT 200h hybrid gets an impressive 40 mpg overall in CR's own fuel economy tests, but was also the highest priced of the test vehicles. However, none of the vehicles equaled the Toyota Prius, the most economical five-passenger car tested by CR without plugging in, averaging 44 mpg overall.

The Jetta TDI gets 34 mpg, much better than the 25 mpg recorded by the gas-powered five-cylinder Jetta SE in Consumer Reports' tests, but diesel usually costs more than regular gas. The Civic Hybrid gets much better economy than its pure combustion counterpart – 40 mpg overall compared 30 mpg, but at $24,800, it costs about the same as a basic Prius, which gets better gas mileage and scored much higher in CR's tests.

The full report on fuel-efficient vehicles is in the October issue of Consumer Reports on newsstands today.

Tsingshan's Threat to Tesla: EV Maker Is In Battery Crosshairs
Tesla-Funded Research Reveals One of The Biggest Mysteries of EV Battery
END_OF_DOCUMENT_TOKEN_TO_BE_REPLACED