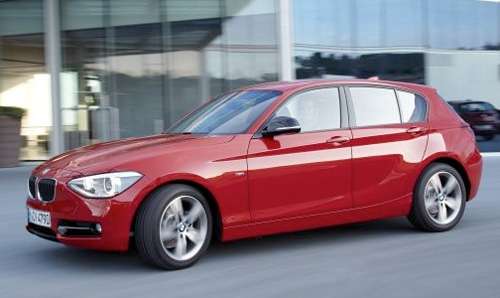 The 1-Series first appeared in 2004 as the 3-Series began to become more upscale. To some extent, the line takes the place of the BMW 2002.

However, as the hatchback is the only rear-wheel drive model, it is, in another sense, a new generation of BMW front-wheel drive compact versions of the Ultimate Driving Machine.

Then again, as an entry-level soft-top convertible, it remains a representative of the workingman or woman’s sports car, if leaning a bit to the demure side.

The new BMW will surface this autumn with the introduction of the model with a 1.6-litre four-cylinder diesel engine and TwinPower Turbo technology, according to a post by Horatiu Boeriu on the BMWblog site. The 2013 BMW 114d will output of 95hp with top torque of 235Nm and go zero to 62mph in 12.2 seconds, maxing out at a top speed of 115-mph.

So it’s nowhere near the fastest Beamer on the road, but it has its own claim to fame – namely, an astonishing 65.7-mpg, according to BMW, and CO2 emissions of just 112g/km.

The BMW 114d can be orderd now as a 3 or 5-door model, with production kicking in this November. Unfortunately, the new diesel BMW 114d will not be available to US buyers, who seem to be slowly coming around to diesel technology. Not that there’s a shortage of models to choose from stateside, but darn the luck anyway.

Pricing will be announced later.