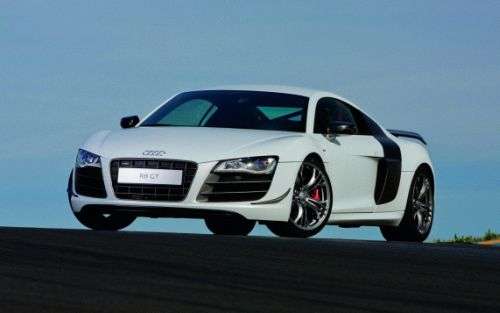 Audi to reveal racing impressions of the 2012 R8 GT

As most of the cable channels concerned with the real world focus on big bad sharks and cute little cupcakes, Audi serves up a week of YouTube releases deemed R8 GT Week. The videos will feature the sugar sweet 2012 supercar taking a bite out of Infineon Raceway at the hands of professional race driver Emanuele Pirro.
Advertisement

From Aug. 8 to12, Audi will release daily video segments demonstrating the jaw-dropping performance and double-take styling of the newest 2012 addition to the acclaimed Audi R8 lineup. Emanuele Pirro will share his impressions as he drives the Audi R8 GT about Infineon Raceway in Sonoma, Calif. Pirro won three of his five 24 Hours of Le Mans victories while driving an Audi R8 LMP1 prototype racecar and consequently can offer a uniquely interesting point of view.

“When I drove the R8, I thought it was impossible to produce something better,” Pirro said. “Well, Audi surprised me once again by building the limited-edition R8 GT. The result is a fantastic car both on the racetrack and on the road which is very difficult to achieve. It is a fantastic pleasure to drive this car.”

The video feeds will be on Audi’s Facebook page where you can already find previews of next weeks posts. In addition, each installment will be posted on the Audi USA YouTube channel.

Needless to say, those wishing to own one of the drop dead gorgeous vehicles will find it takes a sizable bite out of their budget. Pricing for the 2012 R8 GT starts at $196,800 (excluding $1,250 destination charge, taxes, title, options and dealer charges). The supercar is powered by a modified 5.2-liter V10 FSI engine producing 560 horsepower (35 hp more than the R8 Coupe 5.2 quattro and the R8 Spyder 5.2 quattro).

The 2012 Audi R8 GT utilizes an R tronic sequential manual transmission. This combination of engine and gearbox produces a top track speed of 199 mph, and a 0-62 mph time of 3.6 take-your-breath-away seconds. Overall, the Audi R8 GT will grant seasoned drivers high lateral acceleration and a low center of gravity.

Audi used what they designate ASF lightweight construction on the Audi R8 GT, along with extensive use of carbon fiber in the body to reduce curb weight by roughly 180 pounds compared to the Audi R8 Coupe 5.2 quattro. Carbon fiber components are used in parts such as the rear hatch, spoiler and diffuser. The vehicle continues the mid-engine heritage that, along with quattro all-wheel drive, has distinguished all R8 variants. The front to rear load distribution of the R8 GT is about 43/57. An axle-load-optimized torque split is integrated into the front differential with a self-locking differential in the rear.

To further distinguish what some would consider the ultimate automobile, the R8 GT will come with a numbered gearshift knob. The white instrument cluster will be emblazoned with the R8 GT logo and carbon matte inlays will highlight the interior. Seats, headliner, steering wheel and handbrake lever will be black Alcantara with contrast stitching. Doorsills will naturally include aluminum inserts with the R8 GT logo.

Remember to check out Pirro's impressions of the 2012 Audi R8 GT daily next week - it should be much more interesting than cupcakes decorated with sharks.

Stephan Flaming wrote on August 8, 2011 - 6:09am Permalink
A well designed car like it so much <a href="http://www.besttrucksbuy.com/commercial_trucks.php">Commercial trucks</a>