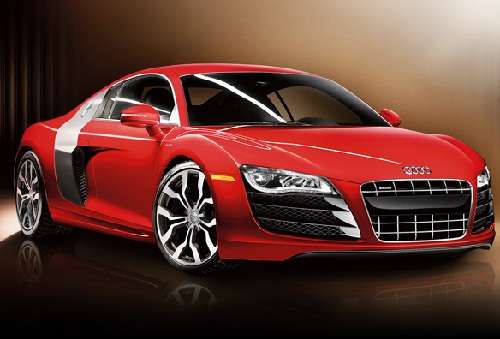 The Audi R8 E-Tron concept was first introduced at the Frankfurt Auto Show during 2009, and when it returns to highlight Audi’s appearance at the 2011 Motor Show the R8 E-Tron is expected to be very close to the final production model, slated for 2012 commercial release.
Advertisement

The Audi R8 E-Tron will have four motors one for each wheel blending the concept into a true quattro. The electric motors will collectively produce 313 hp and 3,319 lb-ft of torque, creating a two-seat model that accelerates from 0 to 62 mph in 4.8 seconds and from 37 – 75 mph in 4.1 seconds. Though very quick, this falls short of the Tesla Roadster Sport’s speed of 3.7 second over the same range.

Audi's R8 E-Tron will use a lithium-ion battery with an energy content of 42.4 kilowatt hours, enabling a range of roughly 154 miles, also short of Tesla’s range, but there is a reason for this.

Nevertheless Audi is right when they state, “Electric drive systems are still very much outsiders.” Even thought electric cars were fairly common in 1900, they are still less than one tenth of a percent of the cars on the road today. Audi is taking what they call a holistic approach to the design of an electric sports car, utilizing systemic lightweight construction and attempting optimal configuration of all components of the electric drive.

The Audi R8 E-Tron will take full advantage of recuperative braking energy to boost the power and range of the vehicle. “A hydraulic fixed-caliper brake is mounted on the front axle, with two novel electrically-actuated floating-caliper brakes mounted on the rear axle,” explains the brand website. “These floating calipers are actuated not by any mechanical or hydraulic transfer elements, but rather by wire.”

Inside the brake pedal will feel just like a hydraulic brake even though no such physical connection still exists. Just as many cars now have electric steering the driver’s experience is relatively unchanged. Power in the drive train will be predominantly routed to the rear wheels with a 70 to 30 percent ratio rear to front. Of course due to the electronic nature of the drive, these dynamics can be altered whenever traction needs demand otherwise.

The new demonstration model of the Audi R8 E-Tron will join Audi’s other debuts of the Audi Urban Concept and A2 Concept plus the fast and sporty S6, S7 and S8 models. The 2011 Frankfurt Auto Show will kick off on September 13. If you are not in Frankfurt or can't go to the show, don't worry. The car maker has created an online opportunity for its fans by providing an Audi virtual tour for the Frankfurt Auto Show stand.