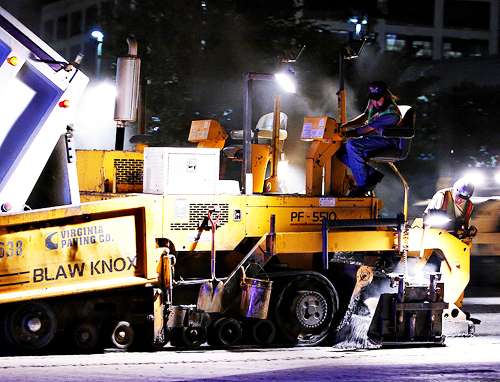 The first asphalt road was implemented 143 years ago today, as Belgian immigrant Edward de Smedt tested his mix of oil bitumen and aggregate on Williams Street in Newark to end the battle between wagon wheels and muddy streets.
Advertisement

The automobile had not yet even been invented, so carriages and wagons with wooden spokes and rims, sometimes sheathed in iron, were ill equipped to deal with soggy roads that were commonplace in certain climates more than half the year.

Today, certain automobiles are capable of crossing shallow streams and handling mud and a variety of terrain conditions, but not in de Smedt’s day.

We bet you never guessed the pothole existed before the automobile!

Despite the invention of asphalt and the considerable amount of traffic along the Eastern Seaboard in those days, by 1904 only 154 miles of paved highway existed in the US.

Today, a glance at a road atlas could give a young man in the wide-open Western US the mistaken impression everything east of the Mississippi River is pavement.

In fact there are over a million miles of urban freeways today, including 59,000 miles in the Interstate Highway System and other freeways.

The origin of the word asphalt goes all the way back to Sanskrit and specifically referred to pitch – another reference to oil bitumen.

Though perhaps less important than the advances of Jonas Salk or Steve Jobs, Edward de Smedt’s contribution to American commerce is undeniable. Without his ubiquitous invention much of America would still be wallowing in the mud, so to speak.

Even so, covering large areas of the ground with the black stuff creates urban heat islands as well, and the temperature over a large mall parking lot can easily reach 130 degrees Fahrenheit on a hot summer’s day.

Concrete uses a completely different binder mixed with granite, limestone or sand, but remarkably the degree of its use in human endeavors is second only to our use of water.

Largely the march of history consists of trading problems we are tired of for problems we haven’t recognized yet. Eventually we identify them, tire of them and find a way to trade them in for a newer problem – until it too becomes familiar.

Or so it might seem to some, don’t you think?